A Look at the Emerging Markets Asset Class

A recent research report published by Fidelity Investments, Secular Outlook for Global Growth: Challenges and Opportunities, outlines some key factors for investors to evaluate for various countries. A large part of the long term future growth potential within a particular market is based on a country's GDP growth expectations. 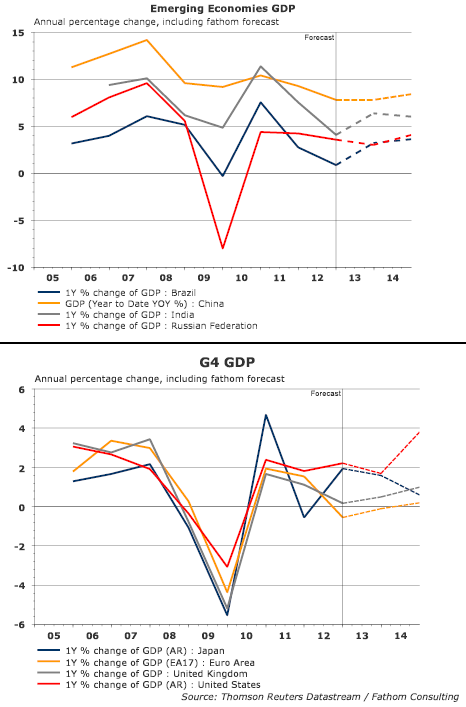 Population growth and productivity growth are key factors that contribute to a country's overall GDP growth potential. With respect to population growth, the report notes difficulties in comparing one country to another due to differing life expectancies. In summary though, Fidelity notes:

"Working-age populations have risen rapidly for several decades, but almost all countries will experience slower growth and receive less of a direct demographic benefit over the next 20 years. Mature countries such as Japan and parts of Europe—with the U.S. as a notable exception—will experience outright declines in working-age population. In general, growth will be faster in the developing world—Latin America, Africa, emerging Asia, and the Middle East—although China’s demographics are not as constructive (emphasis added)."

From a productivity standpoint the report notes three categories that are key drivers of productivity growth: people, structure and catch-up potential. 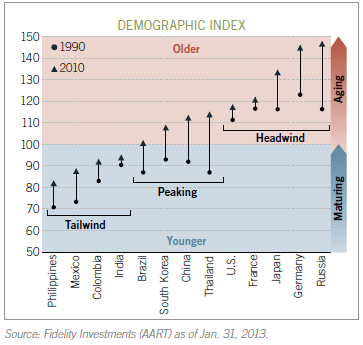 If an investor's time horizon is three to five years (or longer), data would seem to support that some emerging or developing economies will be leaders in global growth. As with individual stocks, the direction of the growth rate plays a key role in a country's potential return as well. As the GDP charts earlier in the post show, GDP growth in countries like China and India having been slowing recently. This decrease in the growth rate can cause short term market disruptions. Also, as the ten year performance chart above shows, emerging markets have done quite well relative to U.S. equities, but are emerging market indices mean reverting?If so, the dangers of catching a falling knife are certainly present. 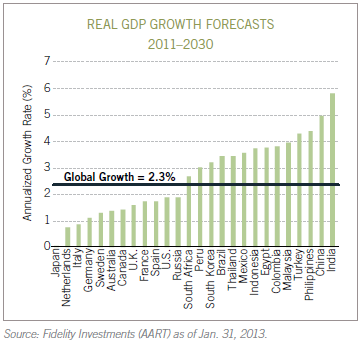 There are many additional factors one most consider, such as financial data quality, the political stability or lack there of, etc. However, it does appear some of the emerging economies do offer return opportunities for investors, albeit, these markets are likely to remain more volatile than developed market equities. It is estimated that the emerging markets will continue to capture a larger share of the world's GDP and at some point this will likely have a positive impact on emerging equities.