Is There Bounce Left in the Ounce?

Is There Bounce Left in the Ounce?

Since the beginning of July, gold prices have enjoyed a strong move on the back of growing macro-economic anxieties, despite its recent correction. The political wrangling of whether or not to raise the debt ceiling south of our border brought the U.S. to the “brink of default” Although a deal was reached at the eleventh hour, in hindsight, the politics only attracted more attention to the country’s fiscal maladies. Investors and traders anticipating a relief rally once the hurdle was cleared were only disappointed as further volatility ensued with the market turning its focus on economic data that continued to be mixed, at best. In a surprise move, credit rating agency Standard & Poors (“S&P”) downgraded U.S. debt to AA+, a notch down from the coveted AAA status in which it has held since 1941. Gold rallied sharply as a result, as the market searched for a safe haven. In 2010, when sovereign debt issues began to spread through Europe, investors sought U.S. Treasuries and bullion as a hedge against a falling euro, leading to a positive correlation between the U.S. dollar and gold for a portion of last year, a rare occurrence. Now however, with the U.S. experiencing its own sovereign concerns, the market is losing confidence in the greenback as a safe-haven, despite no other market having equal size nor liquidity. Gold, as a result has been increasingly being viewed as an alternative currency, despite it not being a riskfree asset as investors have learned in the last few trading days. Although we have recommended gold several times in the past, with the number of questions we have received on the topic, this month we wanted to take a closer look at the precious metal, particularly given the aggressive sell-off we’ve seen over the last several trading days. 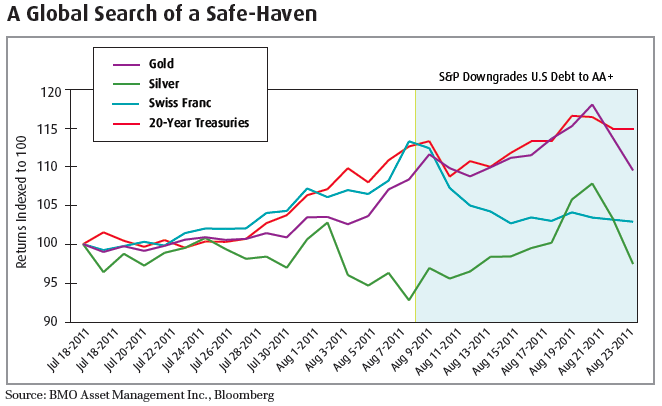 Over the short-term, technical indicators suggested gold was very overbought considering the aggressive move it’s seen up until last week. There’s been some exuberance in the asset class as of late, given the knee-jerk reaction of the market to the recent U.S. and European sovereign concerns. In recognition, the CME Group Inc. and the Shanghai Gold Exchange raised margin requirements for gold futures, in an attempt to shake out the more speculative positions. We believe, however, that the long-term fundamentals are still supportive of gold, particularly since the world’s sovereign debt issues will not subside overnight. Moreover, with the U.S. Federal Reserve (“Fed”) signalling to the market several weeks ago that it will hold interest rates at or near record (lows) levels until mid-2013, other major global currencies may need to devalue to keep their export markets competitive. 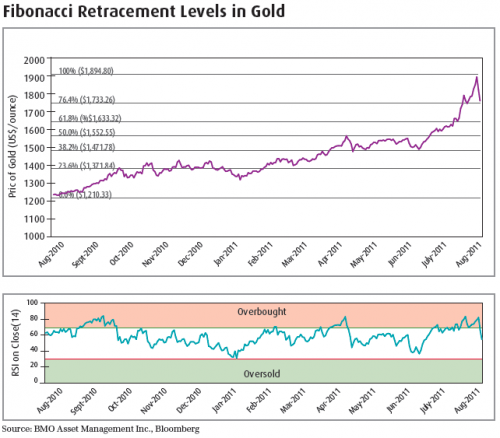 As we mentioned last month, gold tends to exhibit seasonality, typically strengthening in the back half of the year. At the time of last month’s report, even we did not expect gold prices to rise that aggressively. On a longer-term basis, looking at inter-market measures, indications are that the long-term secular run in gold still has legs. Examination of the Dow Jones Industrial Average (“Dow”) to gold ratio, a proxy of equities to bullion (or commodities), shows that the two asset classes have historically gone through long periods which one will outperform the other. These periods, have in the past lasted as long as 20-years and are indirectly reflective of inflation and interest rate cycles. Since the Dow to Gold ratio still trades below its 48-month moving average (“MA”), we believe gold (and commodities) will outperform equities over the long-run. In addition, monetary policy and the current low interest rate environment should remain favourable for commodities. 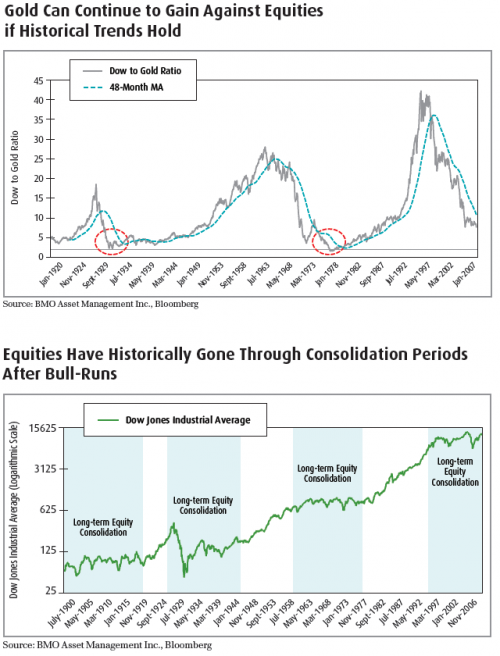 During presentations, we often get asked our thoughts on silver. Though we thought silver was extremely overbought earlier in the year, we believe the CME Group Inc. was successful in drawing out many of the speculative hands. At this point, we believe silver may offer more upside than gold since the silver to gold ratio currently trades below its one-year historical average. The BMO Precious Metals Commodity Index ETF (ZCP) is an efficient way for investors to access both gold and silver prices. 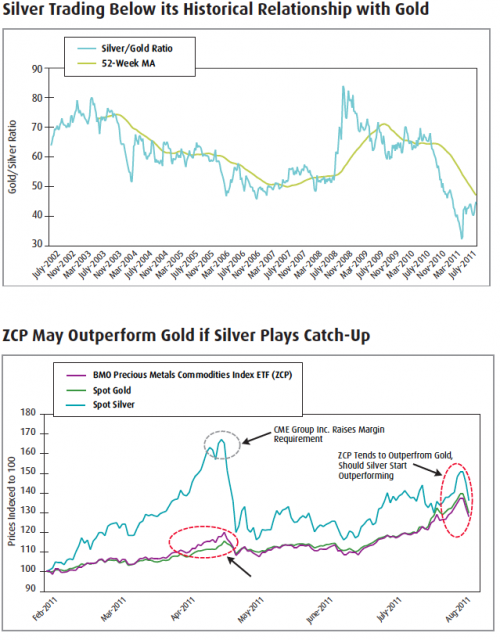 In addition to the silver question, we often get asked which will outperform: gold bullion or gold stocks? As we have pointed out over the last several months, gold related equities have not kept pace with bullion itself. This underperformance is a result of gold companies reacting more to market risk than the underlying fundamentals of the commodity itself. Although this may suggest gold related equities may offer attractive upside, it has also been troubling to see how long it has taken to close the gap, indicating a perception of risk on the horizon.

Several weeks ago, in our BMO ETFs: Trade Opportunities Special Report, we recommended investors de-risk their portfolios. (The report was sent to investors on our free distribution list, to sign up, email Alfred Lee or fill out form on www.bmo.com/etfs). Typically, when markets sell-off aggressively, investors act irrationally leading to some buying opportunities as assets fall significantly below their intrinsic value. Although, we wouldn’t be surprised to see markets bounce back when investor rationality resurfaces, we believe the risk/reward of equities over the short-term has increased. Recently, the S&P 500 Composite entered a “death-cross” pattern, where its 50-day moving average (MA) crossed below its 200-day MA, a key technical support level, where stop-loss orders may be placed and where programs may be set to sell. In addition, short-interest has risen over the last several weeks, which can compound volatility both on the upside and downside, leading to the further irrationality of investors. Another concern on our radar is that the CBOE Skew Index1 (Skew Index), currently sits at 124, a level that has historical preceded a weak 30-day return in the S&P 500 Composite. In the table below, we highlight the average 30-day return in the S&P 500 Composite after the CBOE Skew Index (“Skew Index”) hits various levels. As already mentioned, we would not be surprised to see a market rally, especially depending on the outcome of the Jackson Hole Conference, but we believe the potential for risk is now higher, especially as the market has priced in high expectations from the Fed. Furthermore, which type of precious metals exposure performs best going forward depends on how the market unfolds. Below we highlight four different market outcomes, in no particular order. 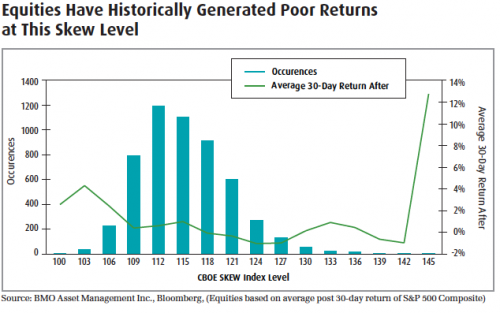 Four Outcomes:
1) Economic recovery: Though economic data has not been promising, it is still possible that much of the weakness was caused by supply chain disruptions from the Japanese earthquake/tsunami earlier in the year. If economic data for the rest of the third quarter improves, making the recent data a blip, gold equities would likely quickly play catch up to gold bullion.

2) A normal bear market: Should the economy continue to weaken but we experience a normal slowdown rather than a crisis, both bullion and gold equities should fare well. This outcome would be possible should economic data continue to be weak, placing further strain on the global recovery. In order for this scenario to avoid a crisis of confidence, there needs to be more clarity on how the U.S. and Europe will solve their sovereign debt concerns.

3) A 2008 type of financial crisis: We do not anticipate a 2008 type of collapse, however there is a significant amount of margin debt in the financial system that could potentially cause a deleveraging event in the off-chance we experience a crisis of confidence. Given the heightened CBOE/S&P Implied Volatility Index (“VIX”)2, how reactive the VIX has been and the elevated SKEW Index, confidence has been put on shaky ground. This outcome may be the least likely and is really dependent on the market’s ability to remain relatively calm whenever volatility arises. So far, credit markets have remained very liquid when markets sell off, a positive take-away. However, in this scenario bullion would outperform gold related equities, though both would likely fall initially. In addition, both would underperform U.S. Treasuries in this scenario.

Given the lack of clarity in macro-economic data and the unpredictabfility of the markets when investors become irrational, we believe having a diversified exposure to precious metals is important. Exchange traded funds (ETFs) are an efficient way for investors to access the various areas in the precious metals market. Gold may be an asset class that investors may want to consider for their portfolio strategy given it is uncorrelated to paper assets such as equities and bonds. Moreover, when the short-term volatility in gold prices dissipates, we believe then will offer an attractive entry point for long-term investors.

Commissions, management fees and expenses all may be associated with investments in exchange traded funds. Please read the prospectus before investing. The funds are not guaranteed, their values change frequently and past performance may not be repeated. This communication is intended for informational purposes only and is not, and should not be construed as, investment and/or tax advice to any individual. Particular investments and/or trading strategies should be evaluated relative to each individual’s circumstances. Individuals should seek the advice of professionals, as appropriate, regarding any particular investment. BMO ETFs are administered and managed by BMO Asset Management Inc., a portfolio manager and a separate legal entity from the Bank of Montreal. 1CBOE Skew Index: - referred to as “SKEW” is an option-based indicator that measures the perceived tail risk of the distribution of S&P 500 Composite log returns at a 30-day horizon. Tail risk is the risk associated with an increase in the probability of outlier returns, returns two or more standard deviations below the mean. Think stock market crash, or black swan. This probability is negligible for a normal distribution, but can be significant for distributions which are skewed and have fat tails. As illustrated in the chart below, the distribution of S&P 500 log returns has a sizeable left tail. This makes it riskier than a normal distribution with the same mean and the same volatility. SKEW quantifies the additional risk. Standard & Poor’s®, S&P® and S&P GSCI® are registered trademarks of Standard & Poor’s Financial Services LLC (“S&P”) and have been licensed for use by BMO Asset Management Inc. BMO Precious Metals Commodity Index ETF (ZCP) is not sponsored, endorsed, sold or promoted by S&P or its Affiliates and S&P and its Affiliates make no representation, warranty or condition regarding the advisability of buying, selling or holding units in the BMO Precious Metals Commodity Index ETF (ZCP).