Thinking about a recovery.

While it doesn’t appear that a U.S. equity recovery has started yet, I believe it’s time to start thinking about how to position for one.

What I’m thankful for.

The U.S. midterm elections went off without much of a hitch. That’s just one of the things I’m grateful for this holiday season.

Like the rest of the investing world, I’m anxiously awaiting a “pause that refreshes” from the U.S. Federal Reserve (Fed). Coca-Cola originally ran that campaign in 1929, on the eve of the Great Depression, in an effort to make the product appealing during a time when people were struggling financially. This time, what would appeal to investors is a pause in Fed tightening that reinvigorates the stock market. We’ll assess the prospects of that pause, the potential for a recovery, and as always try to rise above the noise and put everything into perspective.

A ‘keep it simple’ strategy

The market indicators say recession.1 The hard economic data largely disagree.2 When in doubt, I go with the market. To that point, I expect the market to recover before the economy. In fact, stocks were positive during four of the last nine recessions.3

The economy is still in contraction, with leading indicators suggesting that growth is below trend and declining. The duration of the contraction will likely depend on what the Fed does next. A recovery could be forthcoming. Speaking of which…

Typically, the Fed is easing by the time we are in the contraction phase of the cycle. That’s not yet the case. But, given the likely improvements in inflation, a pause could be forthcoming. The markets are pricing in a 5% terminal fed funds rate by March 2023.4 If that’s the case, then a recovery could be in the offing.

While it doesn’t appear that a recovery has started yet, we nonetheless believe it’s time to start thinking about how to position for a recovery. We would favour allocating toward riskier credit and the more cyclical and value-oriented parts of the equity market.

Even in a tough year — or maybe especially so — it’s worth identifying things for which we are thankful. Here’s my top 5 list, U.S. financial market edition.

Stop me if I’ve told you this

Investors are likely tired of being told that missing the best days and months in the market can meaningfully erode returns. I suppose I’ll stop saying it when investors stop selling at inopportune times.

It may be confirmation bias, but …

… we’re not experiencing the wage-price spirals of the 1970s. In fact, current compensation growth in the U.S. is now close to its long-term average.15 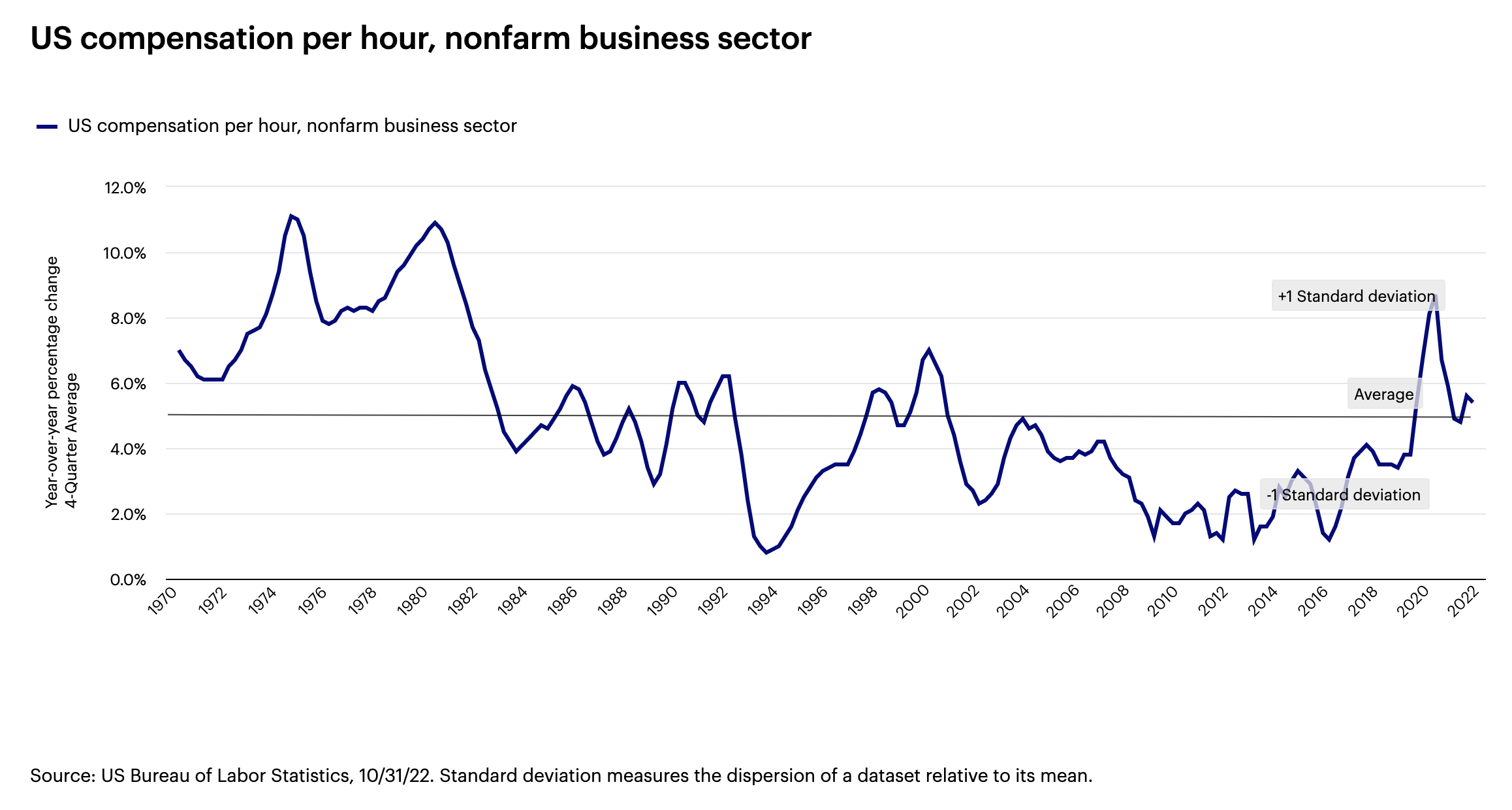 What does it mean that the spread between the 10-year and 2-year U.S. Treasury rates is as inverted now as it has been in 40+ years?

In short, it likely means that the Fed is tightening policy by too much. Short rates have been pushed higher, while the 10-year U.S. Treasury appears to be crying uncle, or more specifically signaling lower future nominal growth. The last time the yield curve was this inverted was in 1981. Yes, it portended a recession but also turned out to be a very attractive buying opportunity for equity and credit investors.

Song of the month

U.S. economic history suggests that high inflation tends to come down rapidly, which explains why “Timber!” has been on repeat in my mind this month. As the saying goes: “The bigger they are, the harder they fall.” Remember, markets likely won’t wait to recover until inflation is back in the perceived “comfort zone.” “Better-than-expected” may be all the market needs.

I once again dialed Ashley Oerth, an investment strategist and Invesco’s resident crypto expert to help me to understand what is transpiring with the crypto exchanges and what the implications, if any, could be for the global financial system. Here’s what Ashley had to say:

Following the implosion of the FTX crypto exchange and its related businesses, questions are swirling over what contagion we may see in decentralized and traditional markets. In crypto, Bitcoin and Ethereum fell sharply along with other big-name cryptos, and crypto-linked trading firms and services are facing serious hardship; Alameda Research, a quantitative crypto-trading firm (also run by Sam Bankman-Fried) was wound down, and lending services BlockFi and Genesis have halted withdrawals, with possible bankruptcy in the cards. Complicating the situation is that there are currently more rumours than facts, which has only helped stoke concerns. Despite all this, this crisis appears so far to be contained within the crypto sphere, which remains largely unregulated, leveraged, and without any institutional backstops (such as a central bank) — all factors that help enable crises like we’ve seen with FTX and Terra Luna.

In the longer term, I suspect that these events may help further the distinction between cryptocurrencies, as embodied by coins and tokens, and the underlying use cases that are found in decentralized ledger technology, which is ultimately a new spin on database technology. Without meaningful, international, cooperative regulation, the crypto world will probably continue to be something of a wild west.

On the road again

My travels in early November took me to the City of Brotherly Love, a city electrified by their professional sports franchises. At the time, the Philadelphia Phillies were leading the World Series by two games to one. More than a few optimistic fans prepared me for what victory might mean — each time Philadelphia had won a World Series, the economy had fallen into recession (1929, 1930, 1980, 2008). Does their loss mean we’re now in the clear?

I was in Philly to speak at a conference for investment professionals, where I was on an agenda with Mike Quick, the former Philadelphia Eagles wide receiver. Quick told his story of what it took to rise from a small town in North Carolina to the heights of the National Football League. He also was sure to note that he is currently the radio announcer for the (then) undefeated Eagles. Quick was asked, “Who hit you the hardest?”

Me (thinking): I bet he gets asked this all the time.

Quick: “I get that question all the time.”

Me (thinking): I bet he’s going to say Lawrence Taylor.

Quick: “You all think I’m going to say LT. Well, it was my sister Linda.”

Me (thinking): That’s hilarious. I may be a lifelong Giants fan, but this guy is ok.

See you in December. I think most of us are ready to put 2022 to rest. Here’s to a less volatile and more fruitful 2023!

4 Source: Bloomberg, 11/18/22. Based on Fed Funds Implied Futures. The terminal rate is the anticipated level that the federal funds rate will reach before the U.S. Federal Reserve stops its tightening policy. The federal funds rate (or fed funds rate) is the rate at which banks lend balances to each other overnight.

6 Source: Bloomberg, 11/18/22. The breakeven inflation rate is calculated by subtracting the yield of an inflation-protected bond from the yield of a nominal bond during the same period.

10 Source: Bloomberg, 11/18/22. Based on the yield to worst of the Bloomberg U.S. Corporate Bond Index. The Bloomberg U.S. Corporate Bond Index measures the investment grade, fixed-rate, taxable corporate bond market. It includes USD denominated securities publicly issued by U.S. and non-U.S. industrial, utility, and financial issuers. Yield to worst is the lowest potential yield an investor can receive on a bond without the issuer actually defaulting.

14 Source: Bloomberg, 11/16/22. The analysis is based on a hypothetical and is for illustrative purposes only. As represented by the S&P 500 Index.