In a year shrouded by turmoil, 2022 has been one for the record books. Financial markets have been upended by historically high inflation, soaring interest rates, dissolution in global trade and armed conflict in Ukraine. This has led to volatility affecting all corners of the financial markets.

With the year winding down, investors might think they’ve seen it all. But one element of market disfunction that’s largely flown under the radar is increased friction within the US Treasury market. Treasuries are experiencing a liquidity decline on the back of economic uncertainty and higher volatility, with large blocks of government debt increasingly hard to trade.

Given this market’s importance to global financial stability, it should come as no surprise that the issue is finally starting to attract notice.

The Federal Reserve has a dual mandate—maximum employment and stable prices—but the Federal Open Market Committee has focused primarily on employment since the global financial crisis (GFC). After all, inflation hadn’t been a point of concern for decades leading up to 2021.

Following the economic turmoil of the GFC, the Fed lowered the fed funds rate to the zero lower bound and rolled out quantitative easing (QE) as a favored monetary tool in its efforts to lower rates and stimulate the economy.

After the worst of the pandemic, the Fed and the US government again acted swiftly to support the economy. In turn, the Treasury Department issued trillions of dollars in debt to fund fiscal stimulus programs. The Fed also continued QE and related asset purchases, easing financial conditions.

As part of this QE program, it bought up US government securities on a massive scale. In concert with much-needed fiscal stimulus and debt issuance, the Fed and the US government were largely successful in revitalizing the economy. Quantitative easing continued after the worst of the COVID-19 pandemic, easing financial conditions.

The scale of the purchases, not only Treasuries but also agencies and mortgage-backed securities, has ballooned the central bank’s balance sheet to roughly $9 trillion (Display). That accounts for nearly 20% of the US government’s more than $30 trillion in total debt outstanding. 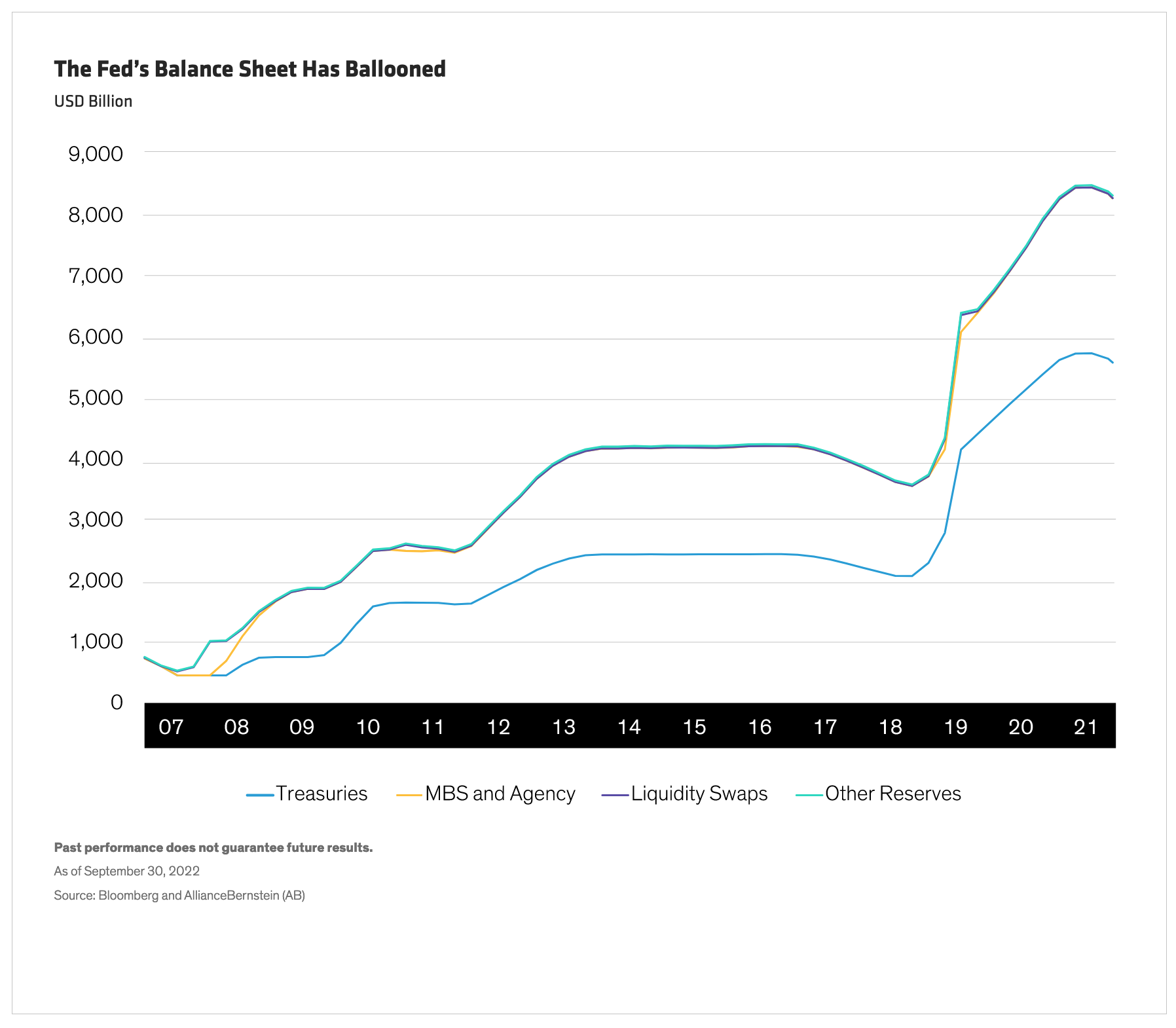 Despite its jaw-dropping scale, the size of the Fed’s balance sheet hasn’t been a primary concern, and quantitative easing has mostly benefitted the economy.

Now, however, conditions have changed.

Faced with historically high inflation, the Fed has implemented quantitative tightening in an effort to cool the economy and stabilize prices. This has involved hiking the fed funds rate to its highest since January 2008, while unwinding the Fed’s balance sheet to the tune of $60 billion per month.

As part of this process, the Fed is allowing bonds to run off at maturity while decelerating its bond purchases. The quantitative tightening program started when bond market volatility was high and Fed policy uncertain. Now, the market is grappling with how restrictive fed funds terminal rates must be in order to lower inflationary pressures.

This is where liquidity issues come into play.

The Fed is the market’s largest buyer of US Treasury securities but isn’t buying back new government debt at the same pace as before, so this demand needs to be supplanted somewhere else.

Big banks typically fill such voids by stepping in as Treasury market markers, bolstering market liquidity. But reforms enacted following the GFC require banks to set aside minimum amounts of capital against assets—including US Treasuries. The requirements increase with market volatility.

These regulations have exacerbated liquidity concerns by discouraging large banks from acting as intermediaries for US government debt. As a result, the volume of Treasuries that change hands each day as a percentage of the total market plummeted sharply and has continued to decline (Display). 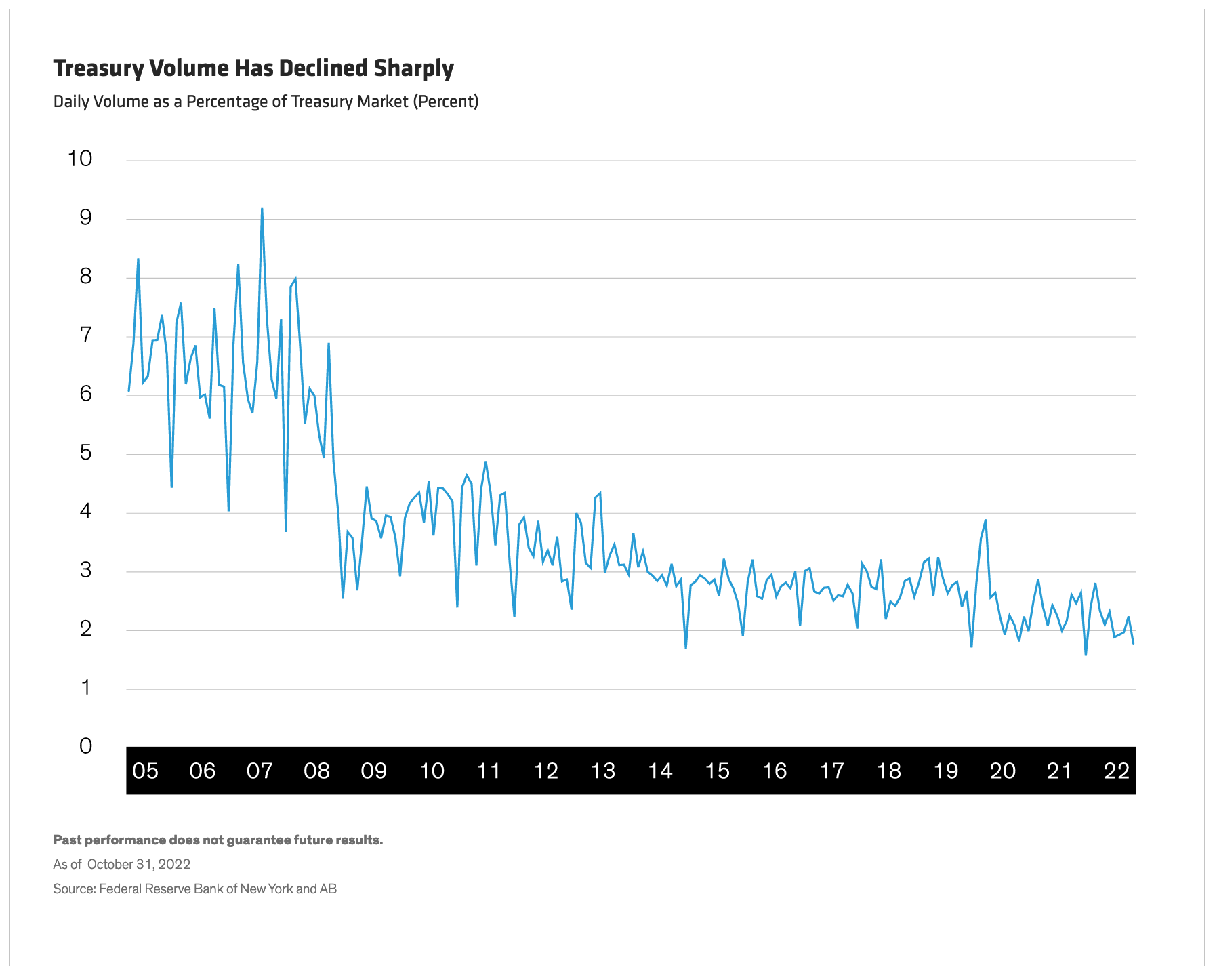 When COVID-19-related shutdowns initially took hold in early 2020, the Treasury market experienced short-term trading frictions. In a possible prelude to a longer-term solution, the Fed temporarily exempted government debt and central-bank reserves from these reserve requirements, known as the supplementary reserve ratio (SLR). This proactive approach briefly stabilized the Treasury market, but SLR exemptions have since lapsed, and large banks are once again forced to make difficult capital-allocation decisions that may or may not include US Treasuries.

Compounding the issue has been the drawdown in bonds this year. Bond market volatility has risen to its highest since the GFC; in response, market makers in US Treasuries have generally had two options:

1. Widen bid-offer spreads (the difference between the price dealers will accept for a security and the price they can command for selling that same security)

2. Reduce risk by trimming the number of securities they absorb onto their balance sheets

As a result, bid-offer spreads have widened to their highest in years for capital-intensive, off-the-run (already issued) securities. Meanwhile, market depth—the amount that can be traded without moving the market—has fallen by 65%–85%, depending on maturity (Display). 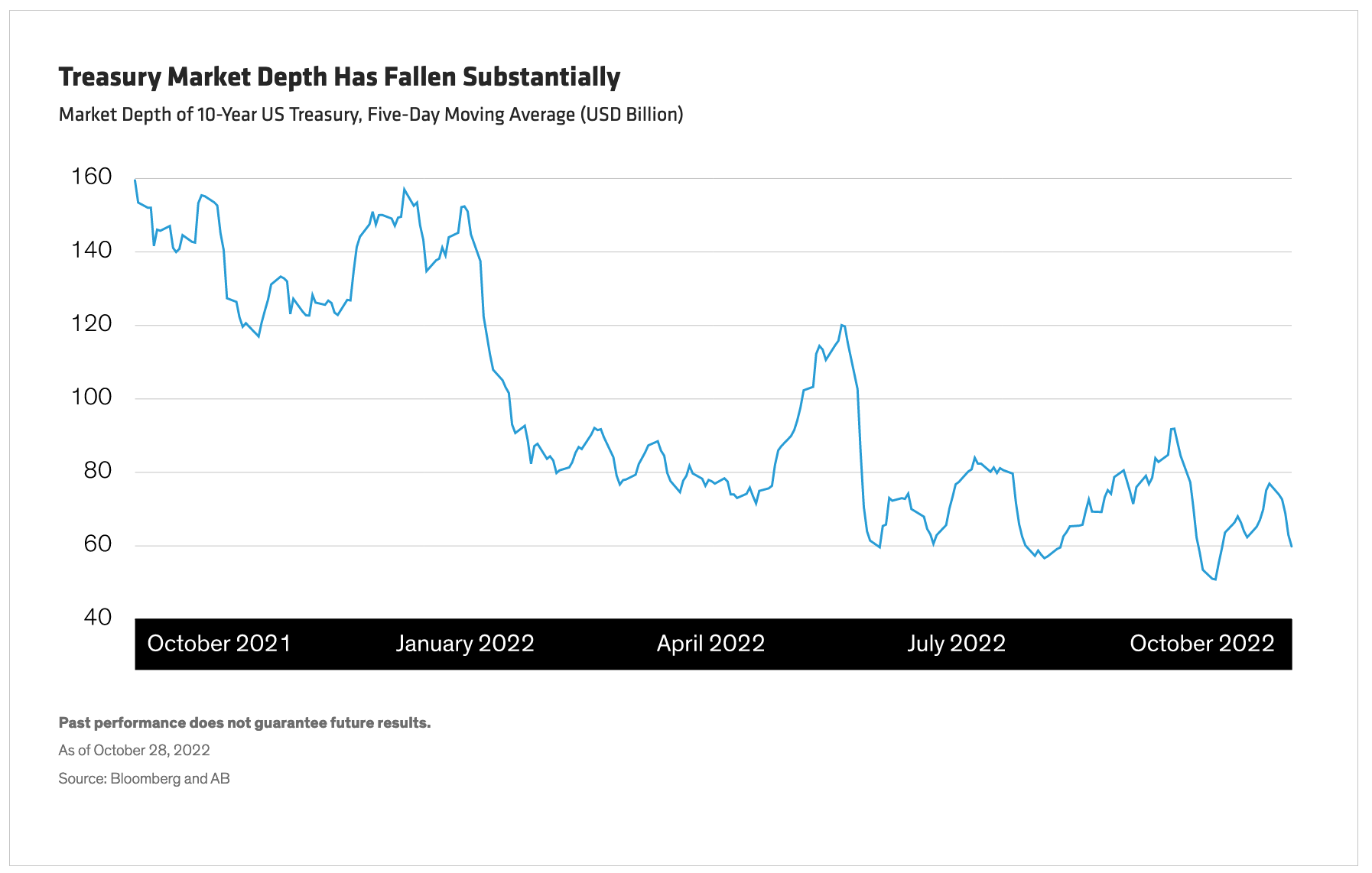 A knock-on phenomenon is that dealers will often quote even wider bid-offer spreads than their peers to establish a non-competitive position and avoid executing the transaction. This can create a negative feedback loop, further complicating liquidity issues. Off-the-run securities, in particular, have become dislocated on the yield curve, making the Treasury market more expensive and harder to move in large volumes.

Some Bond Funds Have Suffered Outflows

Compounding the issue, other traditional Treasury buyers have turned into sellers, a change visible in bond-fund flows. Some fixed-income asset classes, such as intermediate- and long-term government bonds, have seen inflows, but large Treasury-heavy counterparts like intermediate-core and intermediate-core-plus strategies have suffered outflows (Display). 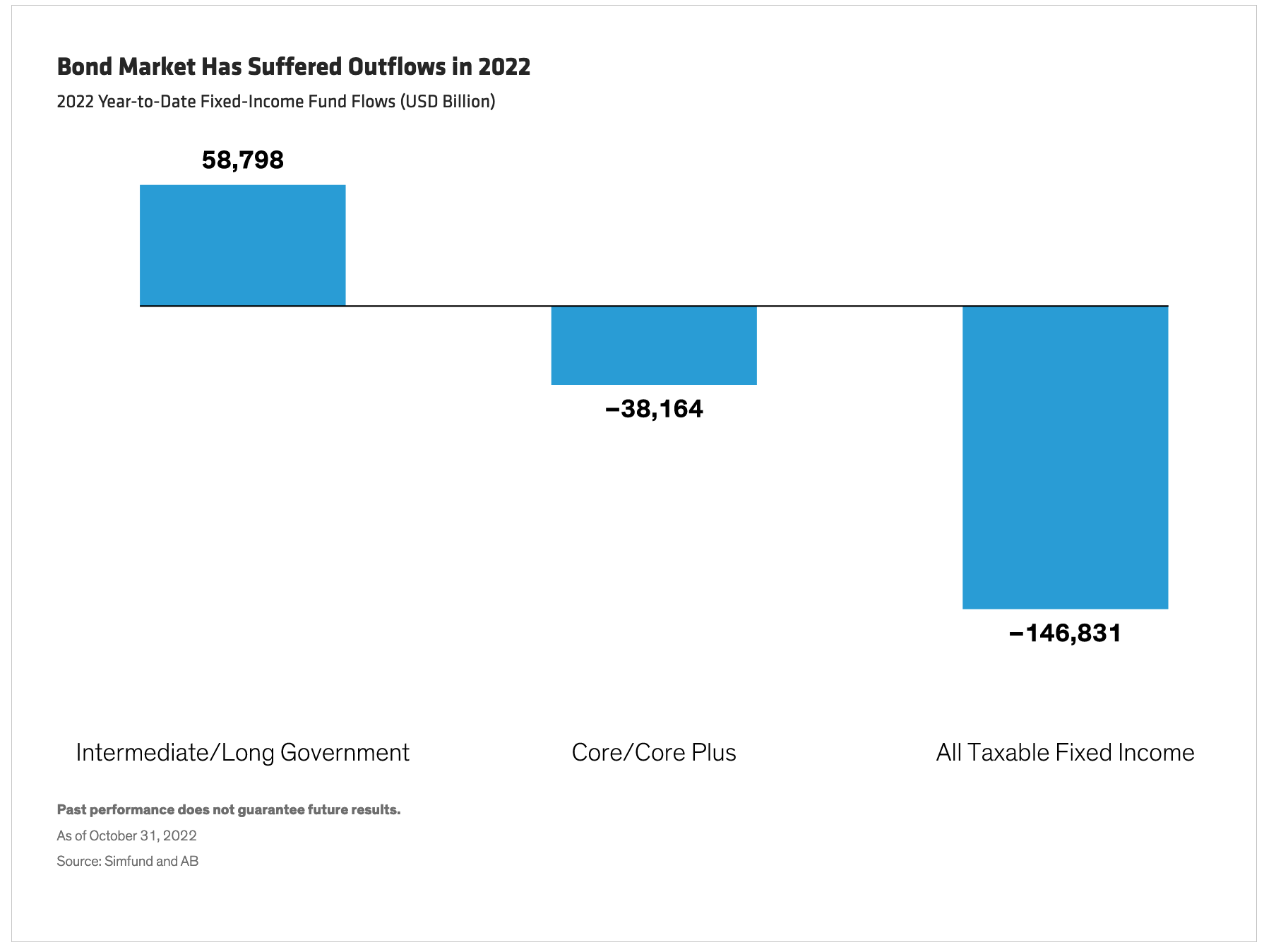 Additionally, bonds as a whole have experienced one of the worst years on record due to rising rates and widening credit spreads, causing US retail investors to flee fixed-income funds at the fastest pace in decades. This has created added selling pressure for both Treasuries and other liquid securities, as fund managers look to meet investor redemptions.

International Buyers Have Pulled Back

International institutions, which have long been marginal Treasury buyers, are also peeling back demand (Display). This shift is largely a function of higher global interest rates and foreign-exchange hedging costs, but foreign central banks are also selling Treasuries to prop up their own currencies and repatriate funds as they seek to resolve pandemic-related financing issues. The result: a roughly $212 billion decline in foreign ownership of US Treasury securities, turning marginal buyers into marginal sellers. 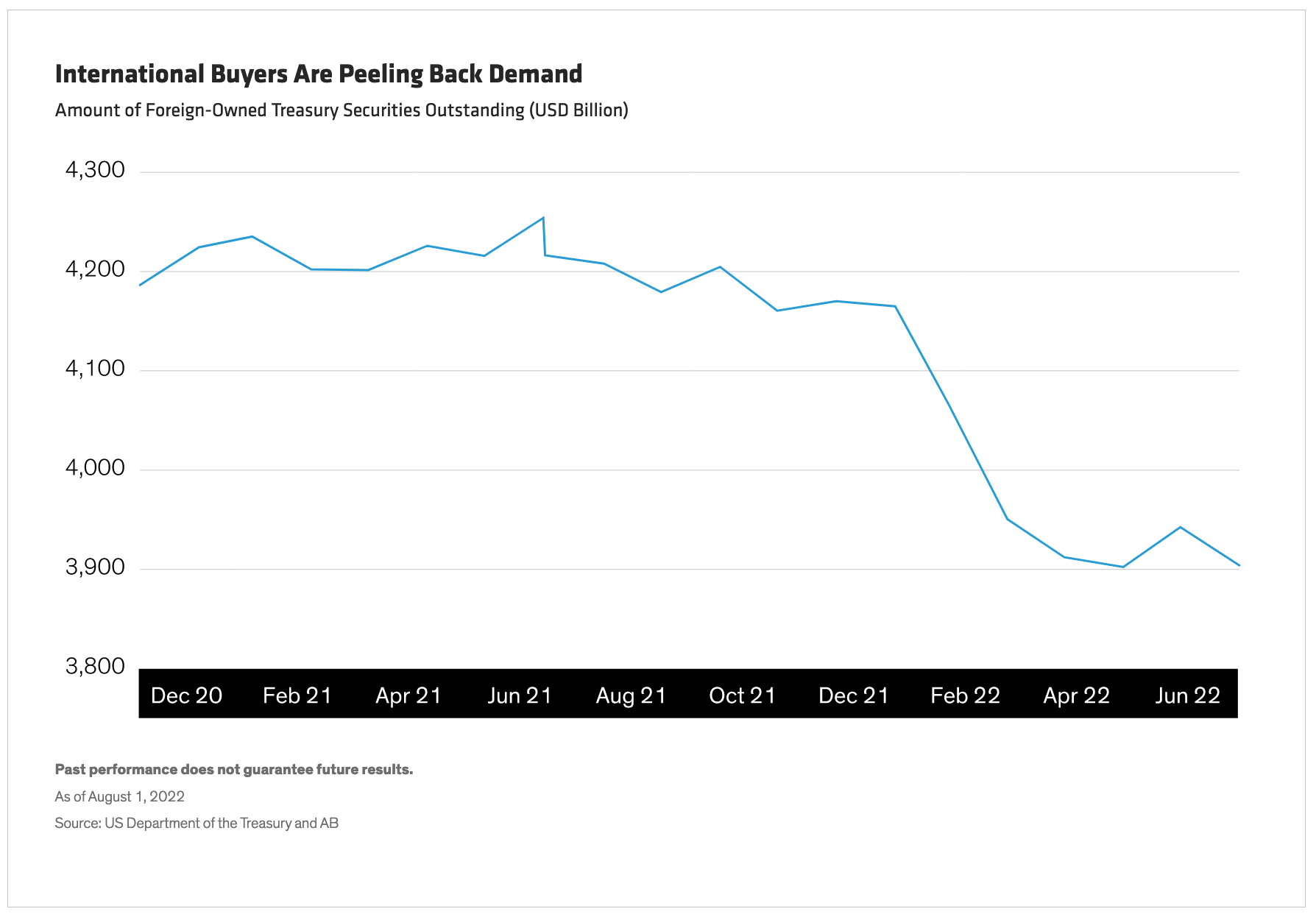 Fortunately, there are potential solutions to the Treasury liquidity issue.

One is for federal regulators to repeat what they did in March 2020—namely, relieve market makers of SLR requirements that include US Treasuries. This move improved market liquidity considerably, as the Fed itself acknowledged. There’s reason to believe the Fed would go this route again, after new vice chair for supervision Michael Barr suggested to lawmakers that he’d consider changes to SLR requirements.

Liquidity bottlenecks may also be resolved without central-bank or regulatory intervention through better market conditions.

While inflation remains elevated in stickier categories, Fed policy may be having an impact. Lower inflation and less economic uncertainty could reduce volatility in the bond market and increase market depth—improving liquidity in the process. As the Fed and other large, developed-market central banks approach peak forecasted interest rates, it’s not unreasonable to believe that bond-market conditions could improve.

In the meantime, if the US economy falls into a mild recession over the next 12–18 months, we expect increased demand for Treasury securities, as risk assets come under pressure and expectations for interest rates shift to a lower-growth, disinflationary environment.

Another welcome outcome would involve a decline in the US dollar and subsequently lower hedging costs. We expect this would re-engage some foreign investors who have withdrawn from US Treasuries to stabilize domestic currency valuations and deploy assets for local financing needs. In turn, this increased foreign investment could fill another void in end-user demand.

Additionally, a proposed Treasury swap program that would replace off-the-run bonds with on-the-run issues could provide a reprieve by moving a percentage of bondholders to the most liquid issues.

Ultimately, the solution could involve one or more of these scenarios, as friction in the US Treasury market stems from restrictive monetary policy, limited dealer balance sheets and evaporating excess demand from traditional buyers of Treasury securities. In our view, a reversal in any of these factors, should improve market liquidity—particularly if the Fed engineers a soft-landing scenario, avoiding any further volatility and market dislocations that would come from a deep recession.

For investors, liquidity is a risk factor, much like interest-rate risk and credit risk. Shifts in market dynamics can create investment opportunities in less-trafficked parts of the Treasury yield curve, or in related markets and financial instruments. Given the proper framework for managing risk, market dislocations can result in compelling investment opportunities.

Matthew Scott is a Senior Vice President and Trader, and Head of AB's Global Rates, Securitized Assets, Multi-Asset and Currency Trading teams. In addition to managing these teams, he has been a trader since 2007 and currently focuses on trading interest-rate and inflation derivatives, government bonds (including US Treasury Inflation-Protected Securities) and securitizations. Scott previously worked as a portfolio assistant for high-grade bond portfolios and held numerous roles in derivative investment shared services. He holds a BS in finance and an MBA in finance, both from Seton Hall University. Location: New York

AJ Rivers is a Senior Vice President and Head of US Retail Fixed Income Business Development. Prior to joining AB in 2022, he was the director of Product Strategy at Lord Abbett. Throughout his career, Rivers has been directly involved in the rates and credit markets, and has directed the product development and competitive positioning of investment strategies in traditional and alternative assets. He has held roles in trading, risk management, portfolio analytics and product strategy. Rivers attended the McDonough School of Business at Georgetown University and graduated from the University at Buffalo for undergrad. He is a CFA charterholder, a Financial Risk Manager (FRM) and a Chartered Alternative Investment Analyst (CAIA). Location: Nashville