Chinese officials may be preparing to bring an end to China's zero-COVID policy but reopening the world's second-largest economy could bring inflationary challenges.s
Signs suggest that China's authorities are preparing to reopen and end the zero-COVID policies that have held back the economy for the past three years. In reaction, the MSCI China Index is up 24% thus far in November, compared to just 2% for the S&P 500 Index. This surge in Chinese stocks has propelled outperformance of emerging markets. Yet, the potential reopening poses upside risk to inflation just as central banks appear to be stepping down their rate hikes. 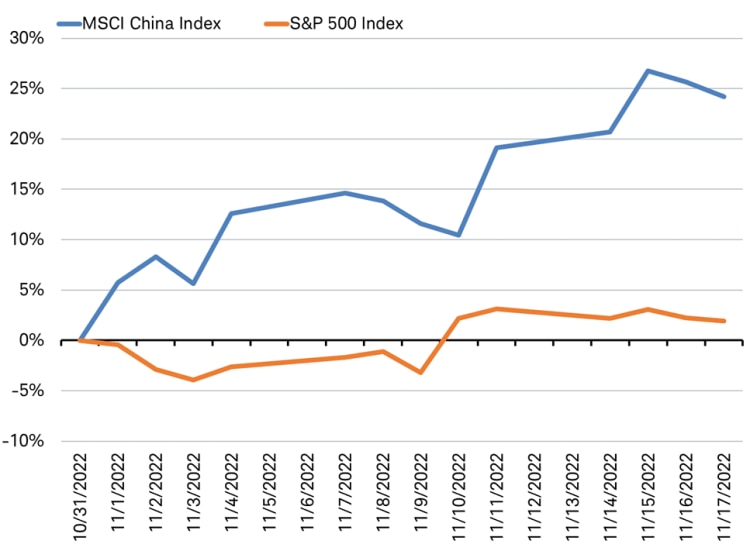 China had more success containing COVID-19 compared with the U.S. and other countries, according to the WHO, mainly attributable to China's commitment to its "zero-COVID" policy. This included stringent lockdowns remaining in place until essentially no new COVID cases were identified in local communities. This approach had a sizable economic cost. This year that was evidenced by the strict lockdown in Shanghai from April to June. Cities accounting for 50% of China's economy are still subject to some form of social distancing and mobility restrictions in November.

Measuring the drag on China's economy is difficult, but amid multiple waves of COVID outbreaks and restrictions this year, retail consumer spending fell -0.5% from a year ago in October 2022 compared with pre-pandemic growth of 7% in 2019 and a 10-year average growth rate of 12%. Interestingly, for the first time in the event's 14-year history, online giant Alibaba decided not to disclose sales results for Singles' Day on November 11, the world's biggest shopping day. There may have been a number of reasons for this, but it may have been because the expected numbers wouldn't be great and might bring even more focus on the zero-COVID measures holding back China's economy. Weak consumer spending alone may have contributed to a potential drag of 4-5% on China's GDP for 2022. The consensus of economists tracked by Bloomberg forecast China's GDP growth to be 3.3% this year compared with 8.1% last year. 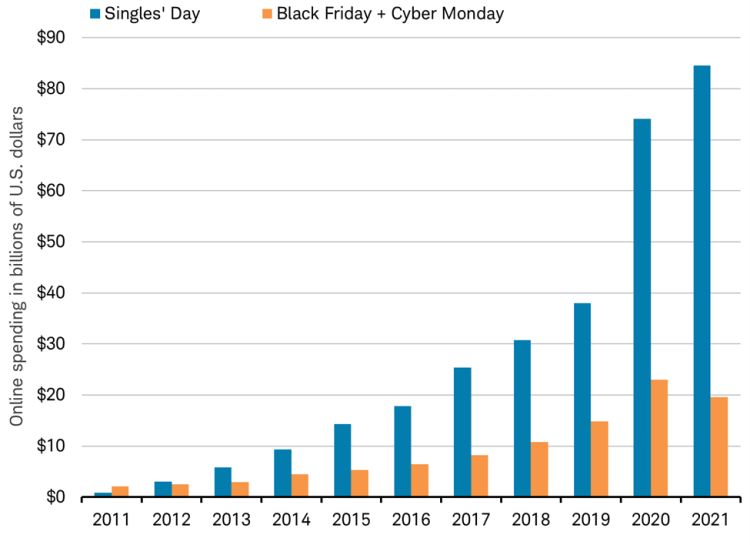 But now, encouraging signs related to reopening have emerged after the Party Congress meeting in late October which is held once every five years.

These signs suggest that the authorities are preparing to reopen, end the zero-COVID policy, and change the government's lockdown reaction to COVID outbreaks as long as the healthcare system is not overwhelmed. That said, we think it is unlikely China will suddenly and materially step away from its zero-COVID protocols before the end of winter—when respiratory infections typically rise. Already COVID cases are climbing, according to China's National Health Commission. China is currently experiencing the biggest wave of cases since April. Additionally, the geographic spread of the virus is the widest it has ever been, with 203 cities reporting outbreaks as of November 13.

COVID cases on the rise again in China 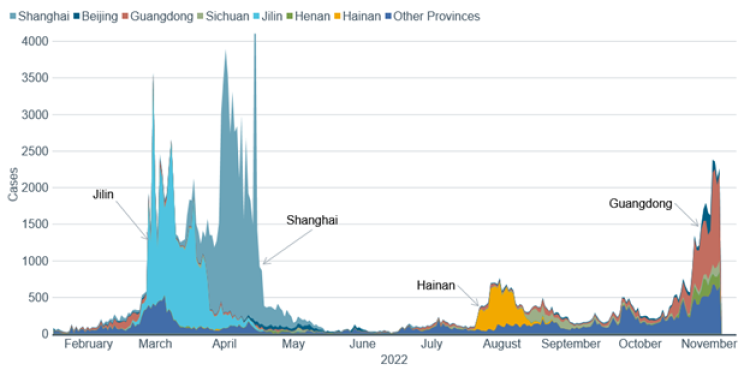 Source: Charles Schwab, National Health Commission of the Peoples Republic of China, Macrobond data as of 11/20/2022.

China may be sending mixed messages by announcing 20 measures to relax COVID rules, while at the same time making it clear they weren't ending zero-COVID policies just yet. The message from China's Standing Committee seemed to reinforce this stance, to "unswervingly adhere" to zero-COVID policy. We believe the measures indicate movement below the surface to eventually reopen, but that four preconditions are likely necessary for China to end zero-COVID policies: change messaging, ramp up vaccinations, improve treatment, and optimize restrictions.

China may not make a flashy announcement that an exit is happening, and it may not happen all at once. Assuming sufficient progress on these preconditions, China could start to reopen in the second quarter of next year—after the Lunar New Year peak travel rush and next March's Two Sessions when the reshuffling of government officials takes place.

China's reopening may be like most other countries' reopening experiences, with economic growth accelerating (especially household consumption) and inflation picking up. Any reopening beginning in March or April is likely to be gradual but could still lead to a surge in pent up spending in the world's second largest economy; 1.4 billion consumers could lead to a rebound in global inflation for both commodities and goods. It may come at just the point that central banks were pausing their rate hikes (see Central Banks Stepping Down for our thoughts on the end of rate hikes). 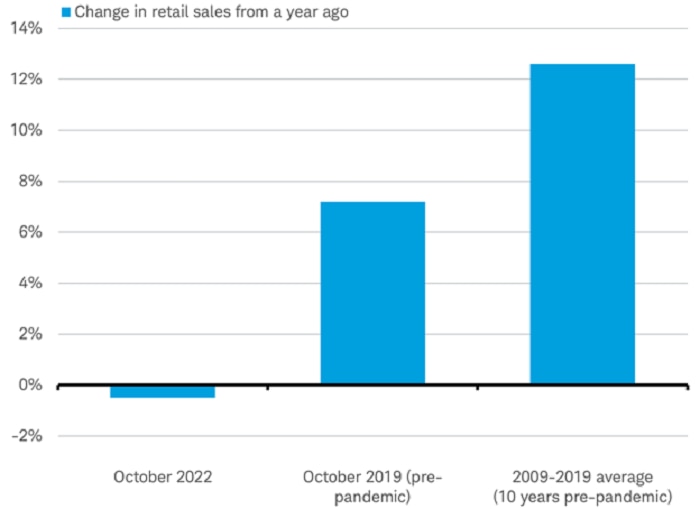 Source: Charles Schwab, National Bureau of Statistics for China, Bloomberg data as of 11/17/2022.

A surge in demand from reopening may not be balanced by a similar surge in supply. While China's authorities allowed demand to slump, they went to great lengths to prevent disruption to production and supply chains.

Of course, there could be other scenarios:

As China moves toward reopening, stocks seem to be welcoming the likely boost to global economic growth but may begin to worry over the potential need to extend rate hikes. We will be watching these signs carefully and the balance between reopening excitement and inflation worries in the stock market.

byJohn Mauldin
No comments
AdvisorAnalyst.com on TwitterTweets by @advisoranalyst