The Federal Reserve has been raising rates at an extremely aggressive manner in 2022, taking the federal funds rate from 25bps to 4%. At the same time, they have been letting assets run off their balance sheet in quantitative tightening. This double-barreled tightening is likely contributing to the pressure risk markets are feeling.

According to my chart below, the Fed’s assets peaked at $8.95 trillion in April and have since declined to $8.68 trillion, or a cumulative drop of $270 billion. It may be no coincidence that last week markets experienced a vicious sell-off as the Fed withdrew $46B. 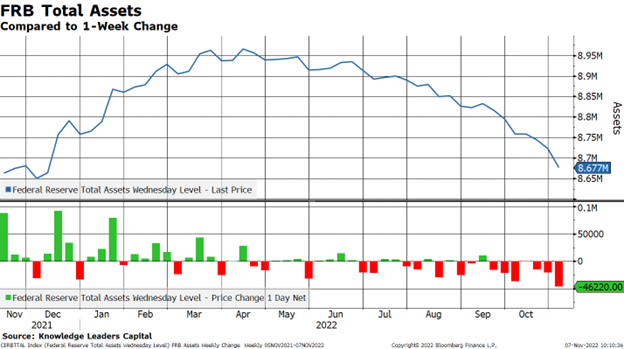 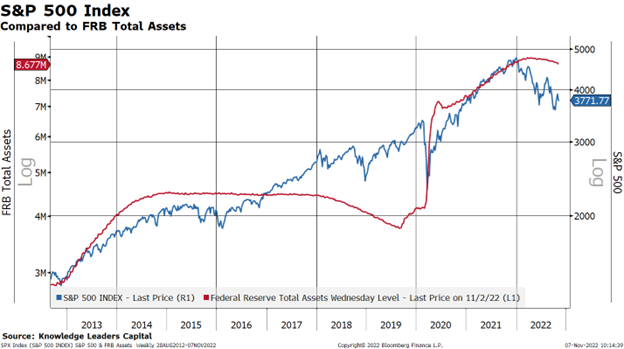 What factors may be mitigating the current bout of quantitative tightening and interest rate increases for that matter? Government continuing to inject money into the economy is the simple answer. 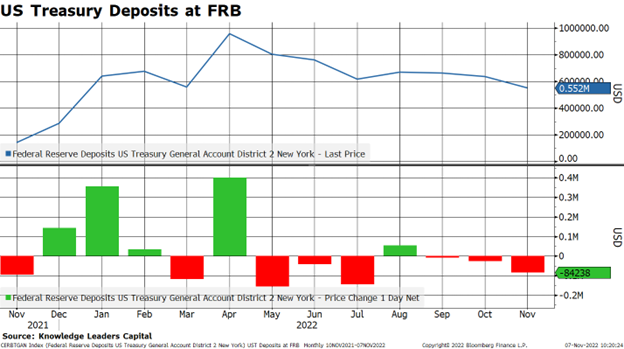 The Federal Government maintains an account at the Federal Reserve. When this account increases, the federal government is taking money out of the economy. They raise funds through bond sales, but don’t spend all the money, parking the remainder at their account at the Fed.

When the Federal Government runs down its deposit account, it releases funds into the real economy, thereby stimulating economic activity.

The Government’s deposits peaked in April 2022 at $957 billion and have since fallen to $552 billion, for a cumulative drop of $405 billion.

So, while the Fed took $287 billion out of the economy, the federal government was busy completely overwhelming these actions by injecting $405 billion into the economy. This lack of monetary and fiscal coordination is confusing and gives the appearance that the government’s left hand isn’t talking to its right hand.

The cynic in me thinks the federal government has been quietly adding more money into the economy than the Fed is taking out in an effort to succeed in the mid-term elections. I guess we’ll find out tomorrow night if this strategy worked.

Dirtnap of the Century