As expected, the Federal Reserve raised its target range for the federal funds rate by 75 basis points to 2.25% to 2.5%, citing high inflation as its primary concern.

As expected, the Federal Reserve raised its target range for the federal funds rate by 75 basis points to 2.25% to 2.5%, citing high inflation as its primary concern. The increase brings the fed funds rate to the Fed’s estimate of the "neutral rate"—one that it estimates to be low enough to accommodate a growing economy but high enough to limit inflation to around 2%. As inflation is running far above 2%, the Fed is indicating it will likely keep hiking rates despite widespread signs of slowing economic growth.

The Fed is also continuing its "quantitative tightening" (QT) program—reducing the size of its balance sheet by letting bonds it holds mature without reinvestment. The pace of QT will begin to pick up in September as the Fed allows more bonds to "roll off" its balance sheet.

Outlook for the economy softens

While acknowledging that spending and production have softened, and the inflationary impact of rising energy and food prices due to the Russia-Ukraine war is beyond its reach, the Fed's view is that job growth is still "robust" enough to prevent inflation from receding. Consequently, its focus is on slowing the demand side of the economy. The big question is: How high rates will need to go to restore price stability?

Currently, the market is pricing in a peak in the federal funds rate of about 3.4% later this year or in the first quarter of next year, and then a decline later in in 2023.

Markets are pricing in a peak fed funds rate of 3.4%

Although the FOMC statement and the SEP pointed to the possible avoidance of a recession, we have a less benign view and believe the soft landing ship may have already sailed. The tightening in financial conditions continues to point to a meaningful economic slowdown; first-quarter real GDP growth was already negative, and now expectations for second-quarter growth are at the zero line. Powell reinforced that the Fed is "not trying to induce a recession," but it may be a necessary ingredient in the lower inflation recipe. Market estimate of the federal funds using Fed Funds Futures Implied Rate (FFM2 COMB Comdty). For illustrative purposes only. Please read the Risk Disclosure for Futures and Options prior to trading futures products. Futures accounts are not protected by SIPC.

The Fed's recent estimates are slightly higher. Federal Open Market Committee (FOMC) participants submit quarterly projections about the economy and the path of the federal funds rate; the median projection for the fed funds rate in 2022 and 2023 was 3.4% and 3.8%, respectively, at the June meeting. This suggests that the committee believes it may need to hike rates by roughly 100 basis points (or a full percentage point) above that "neutral rate" to restore price stability.  Fed Chair Jerome Powell has indicated that the committee would like to see a sustained period of lower monthly inflation readings before easing up on its policy tightening.

The Fed is likely to continue talking tough on fighting inflation to prevent inflation expectations from rising. We believe the message is that it is willing to risk triggering a recession in order to restore price stability. Although a recession isn't the goal, the Fed may already have tightened enough for one to develop. Gross domestic product (GDP) growth in the first half of the year was flat or maybe even negative, financial conditions have tightened significantly, leading indicators have declined for four consecutive months, and the yield curve is inverting—all signs that a recession may be looming. 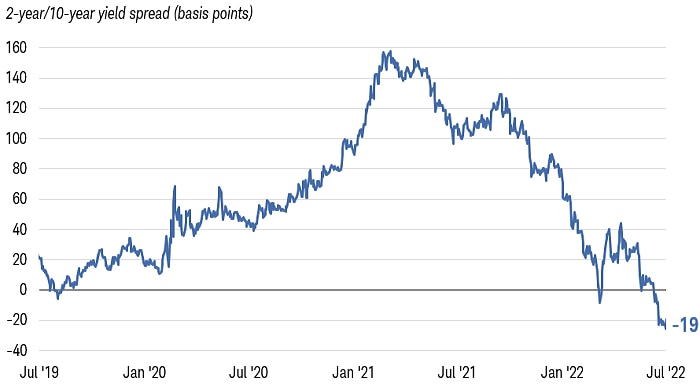 Moreover, inflation expectations for the next five to 10 years have been falling since the onset of the Fed's tightening cycle and are now hovering in the 2.5% region.

Breakeven inflation rates are off their recent highs

Given the growing evidence that economic growth is slowing, we expect the pace and magnitude of Fed rate hikes to slow going forward. The next FOMC meeting is in September – a longer-than-usual stretch. Between now and then, the most important indicators to watch will be the two CPI and PCE reports, along with consumer spending and job growth. Our best guess at this time is that the next rate hike will be 50 bps.

As long as the Fed maintains its inflation-fighting stance, the major trend in the fixed income market is likely further inversion of the yield curve. The Treasury yield curve is already inverted for maturities of 2 years through 10 years. 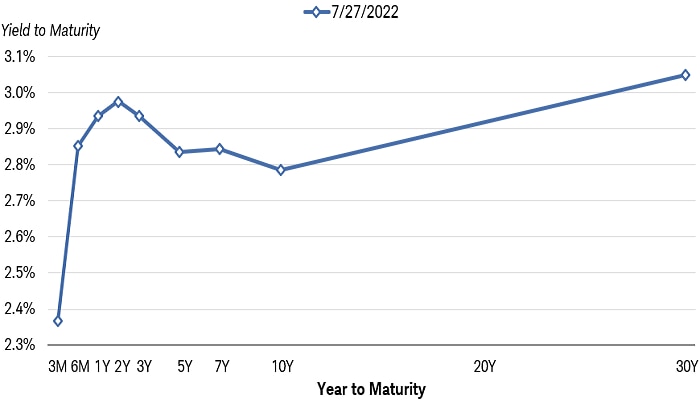 There is a risk that bond yields rise from here since they have fallen so fast lately—another move to the 3% to 3.25% range for the 10-year Treasury yield can't be ruled out. Longer-term, we expect any rise in yields to be limited given expectations for a peak Fed funds rate of just 3.4%.

We suggest investors consider adding some duration—exposure to interest rate risk—to their portfolios rather than waiting for the Fed to keep hiking rates. Bond ladders can be an effective way to invest today. Additionally, we do favor an up-in-quality bias given the economic growth concerns, focusing on Treasuries and investment grade municipal and corporate bonds. We're more cautious on the riskier parts of the market, like high-yield bonds and emerging market debt, as tighter financial conditions and slower growth could pull their prices lower.

On my mind: Are we there yet?

byAGF Investments
No comments
AdvisorAnalyst.com on TwitterTweets by @advisoranalyst