Recession: The Risk Is in the Reversal

Investors often notice the overall direction of markets; missed changes in asset classes under the surface could see a shark attack take a big bite out of unprepared portfolios.

Summer trips to the beach may bring to mind sandy beaches, ocean waves, and the risk of shark attacks. Sharks can be found across the globe, from sub-polar to tropical regions and from shallow waters to deep open oceans. But shark attacks aren't limited to the oceans; we can find them in the stock markets too.

A major shark attack is underway that could take a big bite out of unprepared investors' portfolios. Those who haven't rebalanced, trimming what had been outperforming and buying what had been lagging, could be especially at risk. Recessions and bear markets, followed by recoveries, happen at the turning points of every economic cycle. The leaders of the last cycle tend to reverse and fall the most in the bear market while the recovery and next cycle tend to see new leaders. Therefore, the looming risk of recession can make it a good time to rebalance from U.S. to International and Growth to Value. 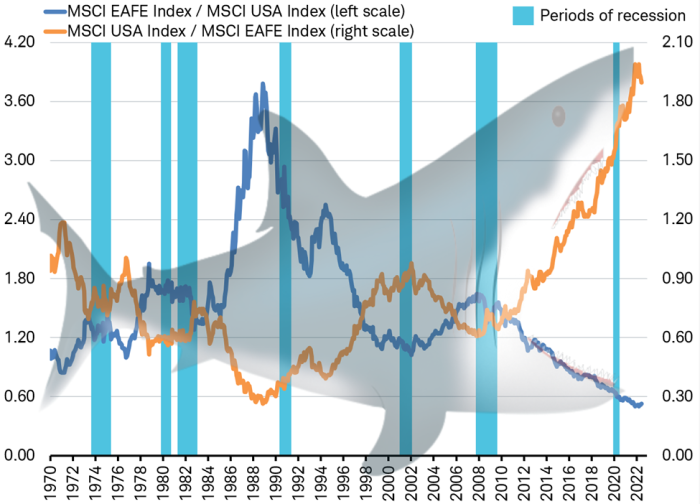 Indexes are unmanaged, do not incur management fees, costs and expenses and cannot be invested in directly.
Past performance is no guarantee of future performance.

There were numerous baby shark attacks around recessions in the 1970s and 2000s. But, in the late 1980s, the jaws were gaping wide after about a decade of international stock market outperformance. As U.S. stocks began to outperform, the enormous jaws began to close and likely took a big bite out of the portfolio of investors who hadn't rebalanced away from international stocks. Now, the shark's massive jaws are open wide again, having been extending for more than 10 years. This time markets appear to be prepared to take a bite out of the relative performance of the U.S. stock market. We could see another a shark attack as international stocks begin to outperform.

Readers may recall that we wrote about how to prepare to avoid this shark attack a couple of years ago. We thought the 2020 recession would start the shark attack, as recessions had generally marked the start of changes in relative performance as the jaws slammed shut in the past. But the 2020 recession was too brief and saw too much stimulus further inflating U.S. growth stocks. Now, the likely coming recession may finally bring the change in leadership as the Federal Reserve and other central banks drain the ocean of liquidity that had been floating U.S. growth stocks ever higher.

Another shark attack could result from the wide gap between the performance of the equity investing styles of growth and value, as you can see in the chart below. Indexes are unmanaged, do not incur management fees, costs and expenses and cannot be invested in directly.
Past performance is no guarantee of future performance.

Growth stocks sharply outperformed value in the late 1990s, led by the Information Technology sector. Then as Tech stocks crashed, value stocks began to outperform from 2000 to 2007 and the jaws again widened, led by the Financials sector. As the Global Financial Crisis erupted in 2008, stocks returned to growth leadership, again led by the Tech sector. While the jaws have already begun to bite down, it may not be too late to rebalance from growth to value.

Growth and value are two fundamental approaches, or styles, in stock investing. Growth stocks tend to offer strong earnings growth while value stocks appear to be undervalued by the market. There are many ways to define value stocks rather than merely the index definitions, we have favored low price-to-cash flow stocks (short duration) as an important value factor this year.

International and value stocks are not immune to losses in a bear market, but they may fare better. For example, the MSCI World Value Index is down 12% this year through June 15, but the MSCI World Growth Index is down a much deeper 29%. Even more importantly, as the tide reverses, international and value may be better positioned to perform in the cycle that will follow since these shifts in market leadership tend to last for years.

Investors often pay a lot of attention to the direction of the overall market and may miss changes in asset class trends under the surface that shape how their diversified portfolio performs. A disciplined approach to rebalancing is important to achieving long-term investment goals. The jaws still appear to be biting down on U.S. and growth stocks—it may be time to swim toward international and value as the tide turns. There's no need to be afraid of the water, just avoid the shark attacks.

Don't Cry for the Most Wealthy