Japan Finally Gets Some Inflation

Japan zero-inflation mindset is no match for today's price pressures.

Inflation across advanced economies has increased to rates not seen in multiple decades.  Japan, where the headline consumer price index rose by only 2.5% for the twelve months ending in April, stands as an exception.  But while this appears moderate relative to other parts of the world, it is very high for a country where a generation has never seen sustained price increases.  Japan’s inflation has averaged only 0.3% in the past three decades.

Japan has not been immune to prevailing global inflationary forces such as higher commodity prices and supply shortages.  The difference in Japan’s experience stems from the way corporations and households react to these forces.

After decades of stagnation, Japanese employees no longer demand higher pay, Japanese consumers resist paying more, and Japanese businesses seldom try hiking prices.  Wages have barely grown in the past 25 years.  This is in sharp contrast to economies like the U.S., where businesses tend to pass on higher input costs to customers, who in turn seek wage increases.  This explains why Japan’s core inflation remains low, staying in negative territory until recently. 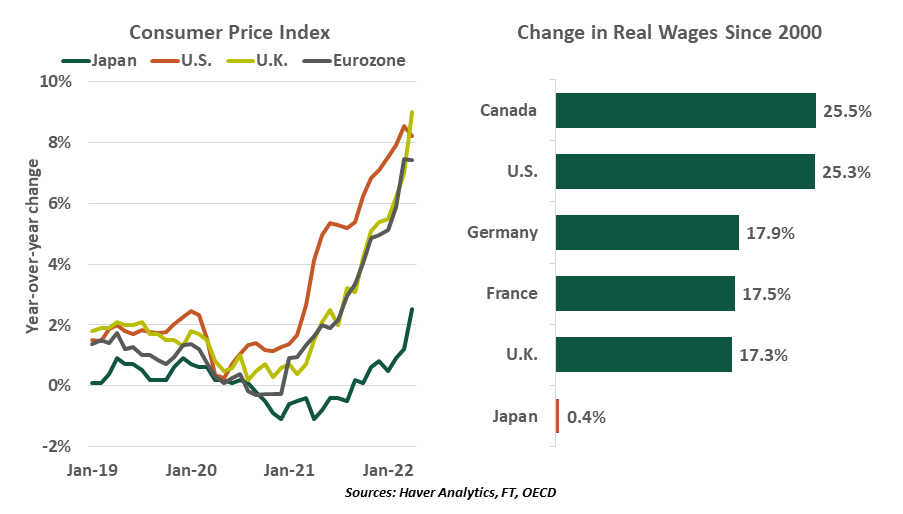 While tighter labor markets are driving wages up in several developed markets, Japan continues to buck this trend, despite a shrinking labor force and persistent worker shortages.  The Japanese labor market is much more rigid than is the case in other nations.  Employees rarely switch jobs, and its large employers still provide long-term job security and set wages based on seniority rather than performance.

Higher inflation readings have led the Bank of Japan to change its long-held characterization of price risks to “generally balanced” from “skewed to the downside”.  However, in the absence of demand-pull inflation, the central bank has maintained its ultra-accommodative monetary policy, leading to policy divergence with likes of the Federal Reserve and the Bank of England.

Emerging inflationary forces have ended decades of deflation in Japan, but the temporary shocks of COVID and the Ukraine war may not be enough to pull the nation out of its zero-inflation mindset.  It will take more than a year of price increases to overcome a generation of stasis.