The middle ground between growth and value

Blackrock Managing Director and Portfolio Manager, Russ Koesterich suggests rather than timing swings between growth and value, aim for the middle.

With headlines focused on inflation and the Federal Reserve, rotations between growth and value stocks have become increasingly violent. Near term this is likely to continue. While skilled market timers may try to get ahead of these moves, a different strategy is to embrace the middle: growth at a reasonable price, known as GARP.

Since the beginning of the pandemic being on the right side of the growth/value divide has had a profound impact on short-term performance. There have been at least four rotations, each one lasting between four and eight months and resulting in outperformance for one style of between 15% and 50%.

That said, viewed from a slightly longer horizon performance differentials have been much less substantial. For example, on a one-year basis both U.S. large-cap growth and value have returned roughly 21%, with about 1% separating the two. Even more revealing is post-pandemic relative performance between the two styles. Using global indexes, after many sharp reversals the relative return between growth and value has simply reverted back to where it was in the spring of 2021 (see Chart 1). 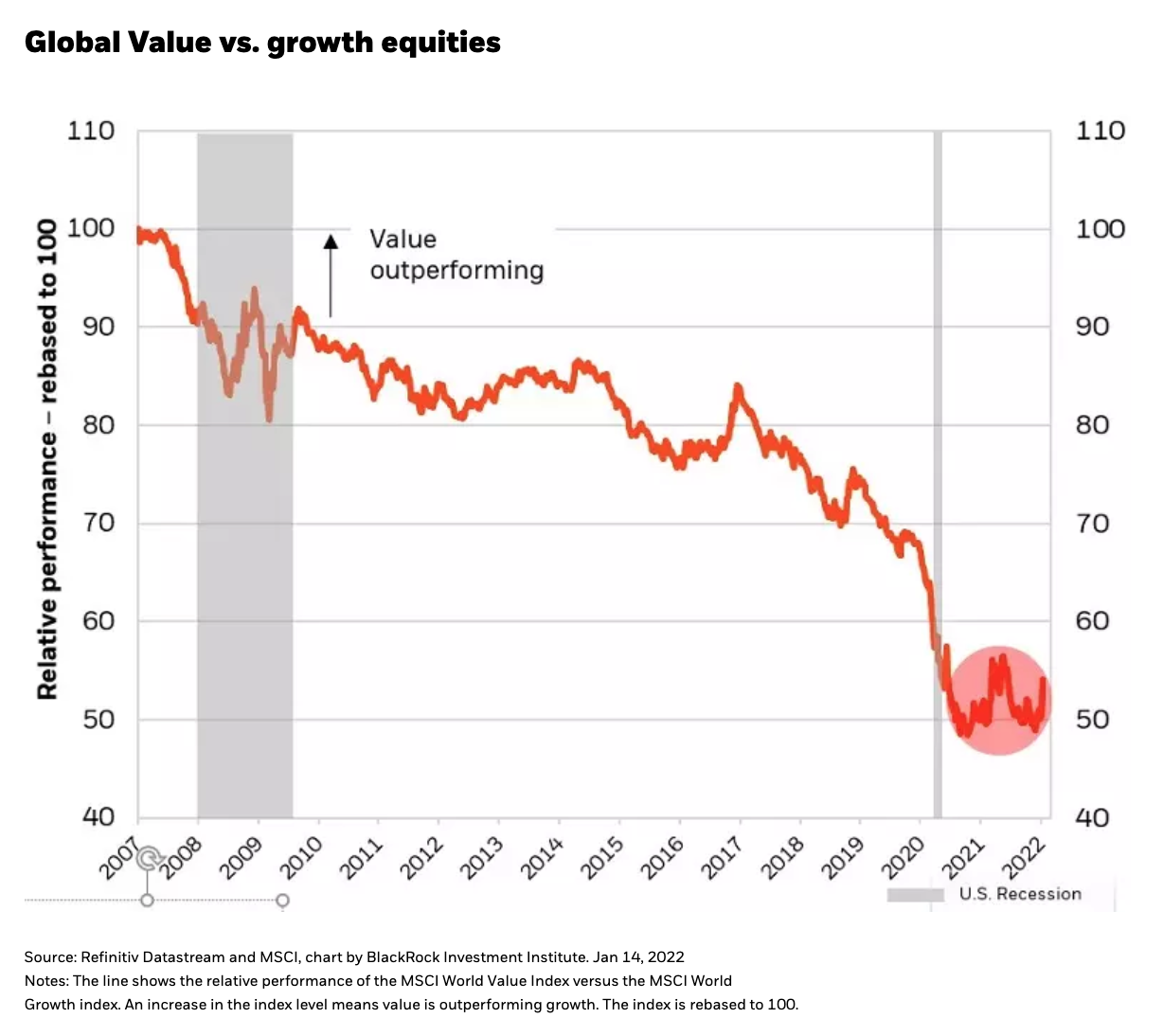 For investors less inclined to time these swings, GARP offers several advantages. Since last March, regardless of the style currently in vogue, high beta – stocks that exhibit greater volatility than the market at large -- low quality names have generally underperformed. Interestingly, these high beta names are most visible at both extremes of the value/growth spectrum. In other words, deep value as well as early or speculative growth tend to be high beta. Given that we are past the early stages of the bull market, when high beta stocks are typically rewarded, investors are probably better off with less speculative names.

Apart from modest betas, the other argument favoring GARP is reliability; historically it has been the most “all-weather” investment style. As the last 18 months have demonstrated, equity style rotations are often hostage to swings in the economy. At this point in the cycle investors may want to moderate their macro-economic risk. GARP has the advantage of generally performing well in most environments.

One caveat to the GARP strategy: inflation. While GARP tends to outperform in most regimes, the exception has historically been where we are today, i.e. high and accelerating inflation. Research done by my colleague Isabelle Liu suggests that during periods of exceptionally high nominal GDP (NGDP) and inflation,
GARP can underperform, particularly against value. That said, both growth and inflation are likely to moderate towards mid-year for a variety of reasons, including a substantial reduction in fiscal stimulus, along with the eventual easing of supply-chain related issues as the current Omicron wave passes and existing untapped labor pools can help fill a record number of job openings. While near-term conditions still support value, rather than trying to pivot every three months the middle may be the more sensible place to be, at least for the longer-term.