Much of the volatility that has recently shaken China’s credit markets has been associated with government interventions. For investors who are worried about the risk implications, fundamental analysis can provide a guide to how the country’s regulators think about companies and sectors.

China’s policy agenda involves a delicate balance between opening up its economy and capital markets and maintaining social stability. The first of these policy strands includes allowing more companies to default on their debt, as a way of enabling risk in credit markets to be priced more accurately—a reform generally welcomed by global credit investors.

The second strand was apparent recently in a crackdown on the education and tech sectors where business practices conflicted with the government’s social aims. The move led to a dramatic sell-off in stocks and in the offshore Chinese currency and credit markets.

Consequently, many investors in Chinese credit are wondering how to assess the risk implications of government interventions. Our research into two under-pressure credits—asset manager Huarong and property developer Evergrande—has yielded some insights.

Which Companies Are Systemically Important?

Huarong, which is majority state-owned and has assets of RMB 1.7 trillion (US$262 billion), alarmed bondholders in April when it failed to announce its 2020 results. The sell-off in its bonds was made worse by investor uncertainty about whether the company would be allowed to default in line with the government’s market liberalization aims.

We don’t think it will because, in our view, the company is systemically important.

In the banking sector, for example, it’s relatively easy to determine which entities are systemically important. The top three tiers of banks—three policy banks and the first- and second-tier commercial banks (respectively, six state-owned banks and 12 joint-stock banks) collectively account for between 60% and 70% of the banking system’s balance sheet.

On size alone, they are systemically important, but there are other factors. These include state ownership, interconnectedness with the financial system (such as borrowing in the interbank market), the banks’ importance for social stability and their access to international capital markets.

The last consideration is significant for China’s national agenda. An asset-manager default in offshore bond markets—a concern of some investors—might limit Chinese issuers’ access to foreign capital. That would run counter to Beijing’s policy of internationalizing the renminbi (RMB).

Huarong and other asset managers meet four of these five criteria (Display). 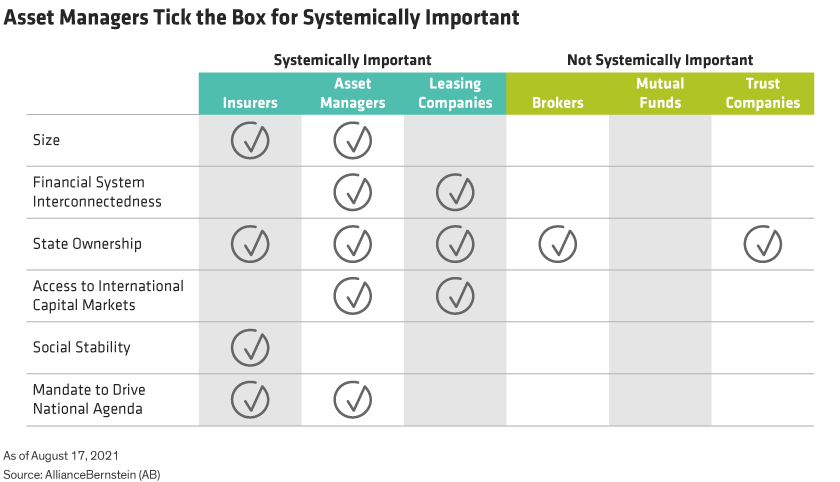 Asset managers are not important for social stability, but they help drive China’s national agenda. Their role is to remove and sell nonperforming loans (NPLs) from bank balance sheets and nonperforming receivables from corporate balance sheets. They help to keep the financial system strong. In 2020, Huarong’s market share in NPLs offloaded from Chinese banks was 40%.

This, in our view, is a fifth reason for regarding the company as too important to fail.

Evergrande is a different story. It’s the biggest property developer in the developing world and has debts of RMB 570 billion (US$88 billion), which makes it one of the most indebted companies globally. But that doesn’t mean it’s systemically important, in our view. Despite the size of its balance sheet, its share of the Chinese housing market is only 4%.

As the Display shows, the company has none of the characteristics that make Huarong systemically important. 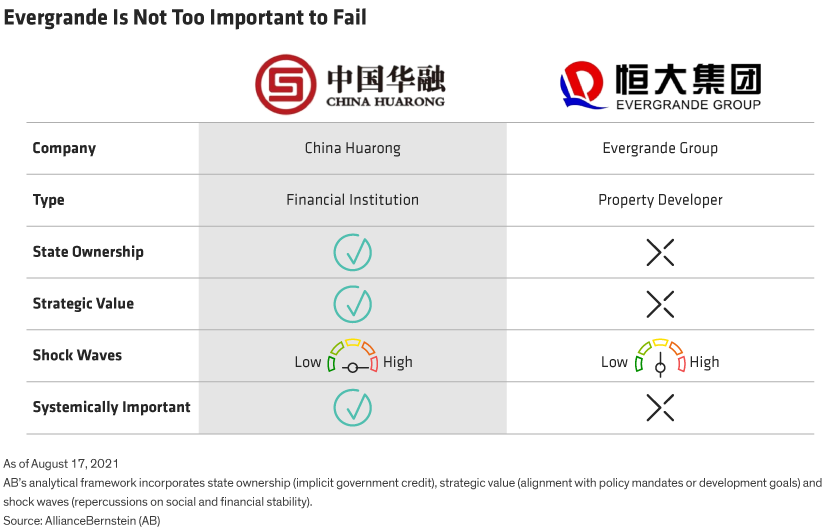 The same applies to China’s other privately-owned property companies.

But, while neither Evergrande nor its peers are systemically important, China’s property sector, taken as a whole, is. Property developers and the sectors that depend on them, such as suppliers of heavy equipment and building materials, have total debts of RMB 101 trillion—amounting to 35% of China’s financial system and equivalent to 100% of the country’s GDP.

So, while individual property developers might be allowed to default or fail, Chinese authorities are very likely to take steps to ensure that the fallout for the sector will be limited. Our analysis suggests that the government will intervene when conditions in the sector start to move from mild stress (a default rate of 4%) to medium stress (10%).

Since we conducted our stress-test analysis, the default rate for Chinese property developers in high-yield offshore bond markets has already crept up to 4%. This is where, for active investors, opportunities might develop.

Of course, aiming to take advantage of a fall in a property company’s bond price in the hope that the government will step in and cause the price to recover is a risky strategy—particularly given our view that Chinese property defaults and failures are likely. Investors should rigorously research each credit on a stand-alone basis before making a decision.

In investing, fortune doesn’t favor the brave, but it often favors the well prepared. That’s why an active investment approach and sound fundamental analysis are, in our view, the keys to investing successfully in Chinese credit.

The authors wish to thank Rob Hopper and the team for their contributions.

The views expressed herein do not constitute research, investment advice or trade recommendations and do not necessarily represent the views of all AB portfolio-management teams. Views are subject to revision over time.