Markets, and particularly cyclical stocks, have made great strides in the first six months of the year. Tony DeSpirito, CIO of U.S. Fundamental Equities, looks ahead to what investors may be contemplating as 2021 crosses the halfway point.

Three questions on many investors’ minds as Q3 kicks off:

1. Should I be worried about inflation?

A majority of BlackRock investors in a recent survey felt that inflation would be transitory. One piece of evidence supporting this view is that the inflation seen in the U.S. so far has come largely from used cars and reopening categories, including airfare, lodging and restaurants. Yet they also felt the market might overreact to the inflation data, making some portfolio protection prudent.

One of these inflation hedges is value-oriented equities. Our analysis of data dating back to 1927 found that value stocks have historically realized the greatest outperformance over their growth counterparts in periods of moderate to high inflation. It is only when inflation is very low that value performance pales — as evidenced in the past 10 years.

As active stock pickers, we also look for companies with pricing power — the ability to pass rising input costs on to the end consumer. Examples include companies in concentrated industries, such as some of the big, non-alcoholic beverage companies, and areas where demand currently outstrips supply, such as semiconductors.

2. Is there still opportunity in cyclical stocks?

Economically sensitive cyclical stocks have had a very strong run since the announcement of effective vaccines in November. We don’t think their full potential is exhausted, but selectivity is more important now. For one, many of the most deeply discounted stocks ― those that had lost big in the throes of the COVID crisis ― have been bid up in the market rally. Some of those that are still at a low price point may be cheap for a reason. These so-called “value traps” are a risk to be avoided.

In addition, as the cycle evolves, investors will increasingly divert their attention toward the potential party spoilers, such as the aforementioned inflation forces as well as anticipation of a Fed move away from highly stimulative policy. This would incite market volatility in general, but could particularly pressure those stocks whose fortunes are tied to economic recovery.

3. How do I position for the next leg of the cycle?

We expect the economy to remain in a boom state as reopenings continue. Yet we increasingly believe many of the easy early-cycle investment opportunities have been acknowledged and exploited. While some cyclicals still have room to run, we see an opportunity to also turn attention to quality stocks as the cycle’s next beneficiaries. Not only are quality stocks the cheapest we’ve seen them since the dot-com era of the late 1990s, as shown in the chart below, but our research finds that they also have a history of outperformance in the midcycle phases of a recovery. 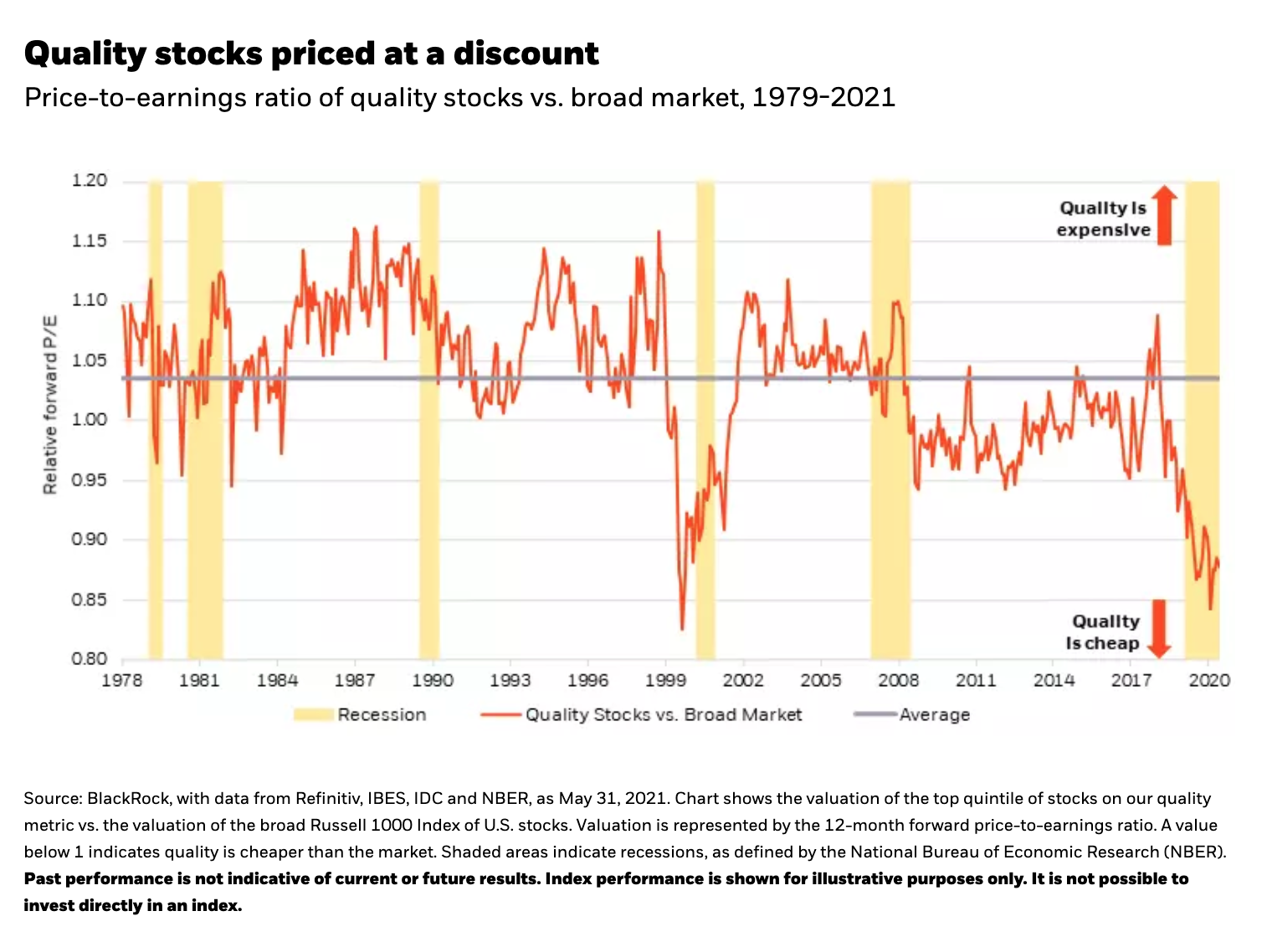 Beyond the short-term tactical opportunity, we see a long-term structural case for maintaining a quality bias. A look at monthly data dating back to 1978 revealed that the higher-quality cohort of stocks outperformed the broad market 60% of the time. On a rolling 12-month basis, our research found the outperformance rate was 76%.

The only time quality did not maintain its edge was in the early emergence from recession. We saw this play out over the past six months, as investors gravitated toward riskier bets that paid off in the early phases of the market upswing. This period also set the stage for an attractive entry point into quality stocks ― a strategy that we believe could lend some portfolio resilience as this unusual, and potentially fast-moving, economic and market cycle unfolds.

For more on the opportunity in quality stocks, see our Q3 equity market outlook.

What the market is signaling now