The switch on the U.S. economy is readying to come fully “on,” more than a year after the global pandemic forced abrupt closures around the world and across industries.

The restart could be unlike any we’ve seen in nearly 40 years, says Tony DeSpirito, CIO of U.S. Fundamental Equities. It is being fueled by unprecedented fiscal and monetary policy, a productive vaccine program, pent-up demand for products and services after months of lockdown, and consumer balance sheets that are uniquely strong after a recession.

Whereas households typically need to repair their finances after an economic downturn, Mr. DeSpirito observes that balance sheets have improved throughout this crisis as individuals saved during lockdown and paid down debt. The upshot is more sidelined cash waiting to be unleashed.

All of this is putting major thrust behind the U.S. economy, raising some critical questions for forward-thinking investors.

Value stocks, as measured by the Russell 1000 Value Index, lagged in the throes of the crisis but have outperformed their growth counterparts by more than 15% since the announcement of the first effective vaccine in November of 2020. It’s been a big move in a short time, but Mr. DeSpirito believes the value run still has legs.

The experience in prior recessions shows that value has outperformed for two years coming out of the downturn. At only six months in and the economy yet to fully open, Mr. DeSpirito sees further runway, even as the return in this early recovery has matched the average of the 24 months following prior recessions. See the chart below. 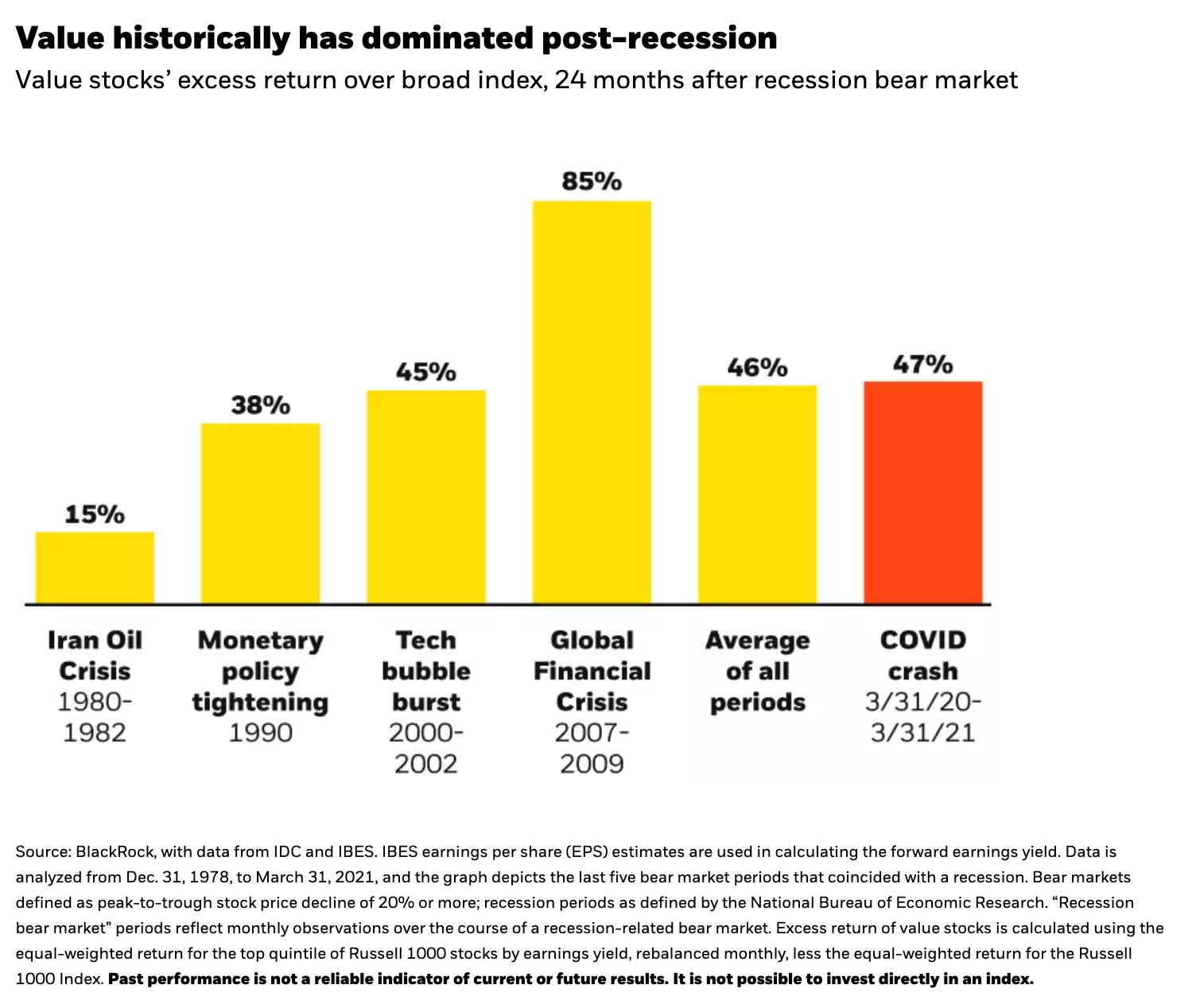 “In prior recoveries, we’ve seen this gap not only narrow to the average, but actually become smaller than the average. We have a way to go on that score.”

Mr. DeSpirito acknowledges this cycle has and can continue to be unlike any other. Change could come quickly, and that has him looking for opportunities to shift from a focus on more deeply discounted cyclical value (a shrinking group as the market recovers) to a quality value focus. This would include stocks with a history of dividend growth and lower relative volatility, an important consideration in a low-rate world.

As the economy boils and rates normalize higher, where is the income opportunity?

Michael Fredericks, Head of Income Investing for BlackRock’s Multi-Asset Strategies and Solutions team, shares his equity counterpart’s affinity for dividend stocks, and sees a particular opportunity after the valuations of high-dividend stocks were beaten down last year. He cites the potential for company dividends to grow across time as a benefit versus bond coupons, which are very low and fixed to maturity.

Mr. Fredericks cites the acceleration in economic growth as another reason to question the role of traditional bonds in a portfolio, as rising bond yields mean falling bond prices. He is cautious on investment grade bonds, mortgages and the quality parts of fixed income that make up the Bloomberg-Barclays Aggregate Bond Index.

The pandemic-fueled flight to quality helped “the Agg” deliver a return of 7.5% in 2020, but it has lost 2.6% through April of this year as interest rates and inflation have risen and investors have grown more comfortable adding risk to their portfolios. If interest rates continue to grind higher, as Mr. Fredericks expects, higher-quality bonds may continue to struggle.

His favored income engines are preferred stock, high yield bonds and bank loans. The latter are particularly interesting given they are higher in a company’s capital structure and have a low correlation to equity moves. Bank loans currently trade at a discount to par, offering some capital appreciation potential in addition to yields in the area of 4%.

In addition to dividend stocks, Mr. Fredericks also likes equity covered calls – a strategy of owning a stock and giving away potential gains beyond a pre-determined level. This, he says, is another way to generate attractive yield while allowing for upside participation should stocks continue to move higher.

A fine time to get active

Both Mr. DeSpirito and Mr. Fredericks are active investors, an attribute they believe gives them the agility to navigate a cycle that could be as fast on the upturn as it was on the downturn.

“We have to think of the world differently in the next few years,” Mr. Fredericks adds. “There will be anxiety, but as active investors, we have the flexibility to seek out yield in a yield-starved world without taking huge risk.”

“Active adds value,” he concludes, a statement both are eager to deliver on as the world embraces post-pandemic growth.

Note to Elon: Crypto Miners Are Part of the Solution to Curbing Greenhouse Gas Emissions