The S&P Global BMI serves as a benchmark that measures global stock market performance. The index consists of three mutually exclusive and exhaustive size benchmarks: The S&P Global LargeCap, the S&P Global MidCap, and the S&P Global SmallCap. These indices are float market capitalization weighted and reconstituted annually in September, following the same weighting scheme and rebalancing schedule as their benchmark index. 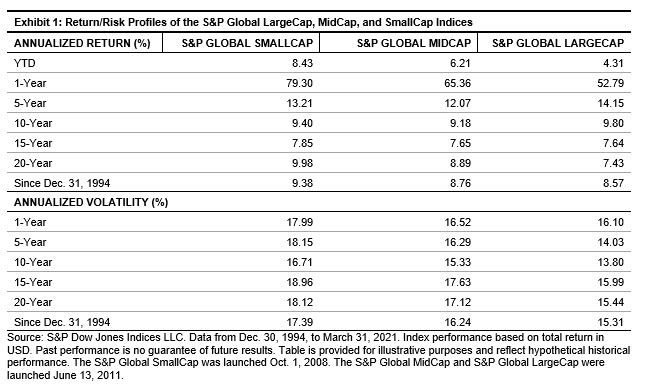 Exhibit 2 shows the rank of performance by calendar year with 1 indicating the best performer and 3 representing the worst performer. Over the past 27 years, the S&P Global SmallCap and the S&P Global LargeCap took turns in the winning position, each taking the lead for 12 years, while the MidCap was positioned as second place for 22 years. 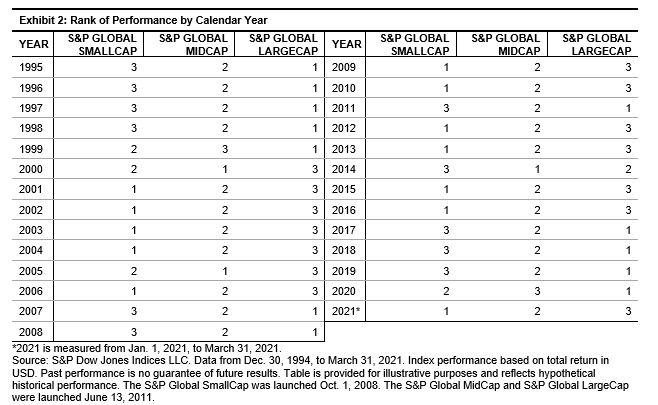 The historical average sector weights shown in Exhibit 3 indicate that there has been no significant difference in sector allocation among the three size indices overall. However, the S&P Global SmallCap and S&P Global MidCap have been overweighted in the Utilities and Communication Services sectors, while the S&P Global LargeCap has been overweighted in the Industrials, Information Technology, and Health Care sectors. The Financials sector has had the highest weight in all three size indices throughout the history, with an average weight of more than 20%. The Communication Services sector (reclassified from Telecommunication Services in 2018) shows the lowest weight in all three indices. 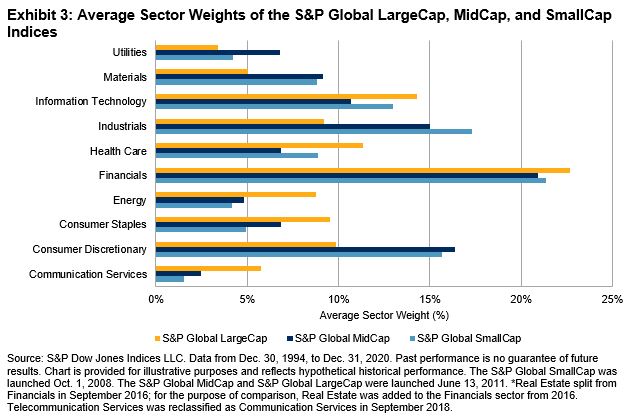 The S&P Global LargeCap, MidCap, and SmallCap indices performed differently over different time horizons. Because of their return/risk patterns over these different time horizons, an investment in a particular size category that had higher returns during one period could potentially help to offset losses in another. Understanding the risk/return patterns of the size indices can potentially help achieve return/risk targets for certain investment portfolios.

The posts on this blog are opinions, not advice. Please read our Disclaimers.

This post was originally published at the official blog of S&P Dow Jones Indices, The Indexology Blog.

byRaise Your Average Podcast
AdvisorAnalyst.com on TwitterTweets by @advisoranalyst