Investors can find plenty of innovation engineered by companies based in international and emerging markets.

If you were under the impression that all of the most innovative companies in the world are based in the United States, try paying for everything you buy on a daily basis using a single smartphone app.

That’s a challenging task in the U.S., but it’s commonplace in China, South Korea and other Asian countries that have rapidly adopted digital payments technology on a wide scale. These days, Asia and Europe lead the world in some of tomorrow’s technology, and it may take a while for the U.S. to catch up.

Asia has quickly become the world leader in digital payments 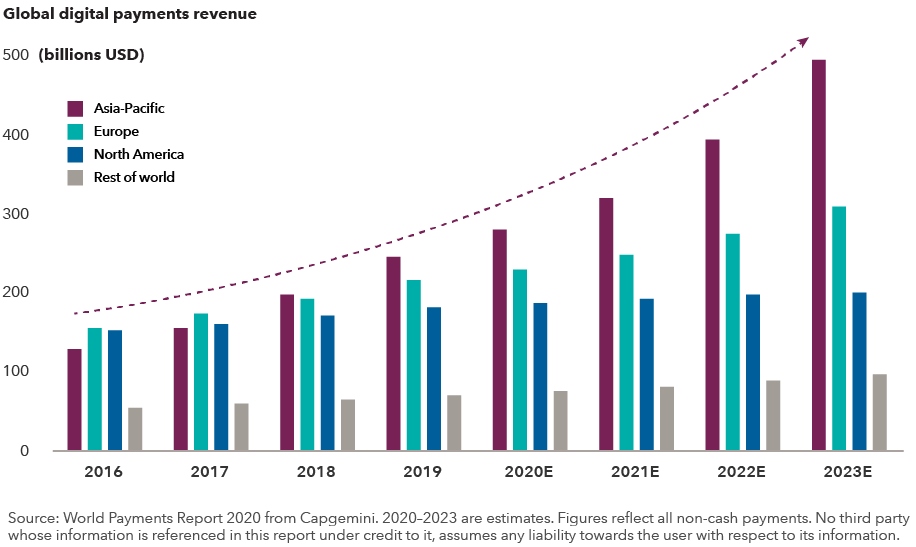 Think all innovation is in the U.S.? Think again

Simply put: Cash is no longer king, especially outside the U.S.

Innovation in digital payments has gained far more traction abroad. For example, in some emerging markets just a few years ago, many customers had no bank accounts but they did have mobile phones — and that led to faster adoption of mobile payments. In China, Alipay (part of Ant Financial) and Tenpay (run by Tencent) are dominate players. Others also have emerged and experienced strong growth in demand for their services, including Yeahka in China and PagSeguro and StoneCo in Brazil, which offer mobile payment platforms for merchants.

The COVID-19 crisis has accelerated the use of mobile payments, not only in emerging markets but around the world, as consumers embrace the concept of “contactless” transactions. In the U.S., companies like Mastercard and PayPal are poised to benefit as consumers become increasingly comfortable with the technology.

“A decade from now, I think digital payments will be the norm and people will give you odd looks if you try to pay with cash,” says equity portfolio manager Jody Jonsson.

This powerful trend is just another reminder why investors shouldn’t ignore opportunities in international and emerging markets. While the U.S. is likely to remain a primary engine for innovation, it would be shortsighted to think of the U.S. as the sole province of inventive companies. What’s more important for investors is to seek out the world’s most innovative companies in growing industries wherever they are located.

As we’ve noted many times in the past, not all the best-returning stocks are in the United States. While international and emerging markets indexes have lagged U.S. markets over the past decade, on a company-by-company basis, the individual stocks with the best returns have been overwhelmingly located in non-U.S. markets.

In fact, there is so much innovation happening overseas that venture capital funding has been growing at a faster pace outside the United States. Part of that is a function of valuations, which are generally cheaper outside the U.S., but it’s also clear that professional early-stage investors are increasingly finding compelling new opportunities elsewhere. One area is China’s biopharmaceutical sector, where venture capital funding has surged in recent years and a number of companies are seeking to go public.

Venture capital is funding innovation outside the U.S. 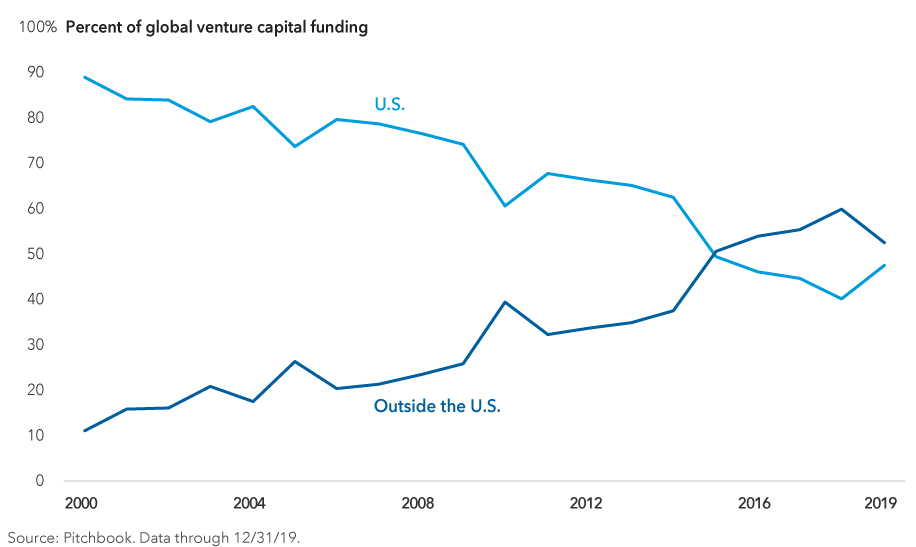 Renewable energy lights up the globe

Another area showing incredible global advancement is renewable energy. The shift to green energy sources is gaining steam as traditional utilities rely less on carbon-based sources and increasingly on wind and solar.

The move toward renewables is most pronounced in European utilities, including Enel in Italy, E.ON in Germany and Denmark’s Ørsted. Governments in those countries have set high decarbonization targets and created incentives for further investment. China has also recently announced it aims to cut its net carbon dioxide emissions to zero by 2060.

A number of factors are setting the stage for a golden age in renewables. Among these are declining costs attributable to advances in automation, artificial intelligence systems driving improved productivity and efficiency, and better storage capabilities.

“Some traditional utilities are reaching an inflection point where they are starting to be recognized more as growth companies rather than just staid, old-economy power generators and grid operators,” says equity portfolio manager Noriko Chen. “There are strong tailwinds that could drive growth for years.”

Elsewhere in Europe, pent-up demand for luxury goods has the potential to provide a substantial boost to companies in that sector. European firms such as LVMH, Richemont and Kering dominate the luxury market, and Chinese consumers are driving much of the growth. Has the U.S. dollar peaked?

One more potentially compelling reason to look outside the U.S.: At some point, the decade-long dollar bull market will come to an end. And there is some evidence that might already be happening. On a year-to-date basis as of November 20, the dollar is down 5% against the euro and 4% against the yen.

That’s largely due to investor worries about ballooning U.S. government debt, near-zero interest rates and a muddled economic picture. Timing the exact start of a currency cycle is notoriously difficult, but if this declining dollar trend continues it could provide a nice tailwind for international and emerging markets equities. Likewise, global bond sectors, such as emerging markets debt, could become more attractive.

Capital Group currency analyst Jens Søndergaard cautions that the shift could take time: “I believe the dollar is overvalued, but to get a proper dollar bear market, we need evidence that growth outside the U.S. is firming up.”

In the near term that will largely depend on the trajectory of the virus, as well as how quickly a vaccine is approved and administered throughout the world.

“Once global growth does take off, and we have a proper recovery from the pandemic,” Søndergaard adds, “I think in all likelihood we will see the dollar weaken further.”

Could a weak U.S. dollar spell relief for international equities? 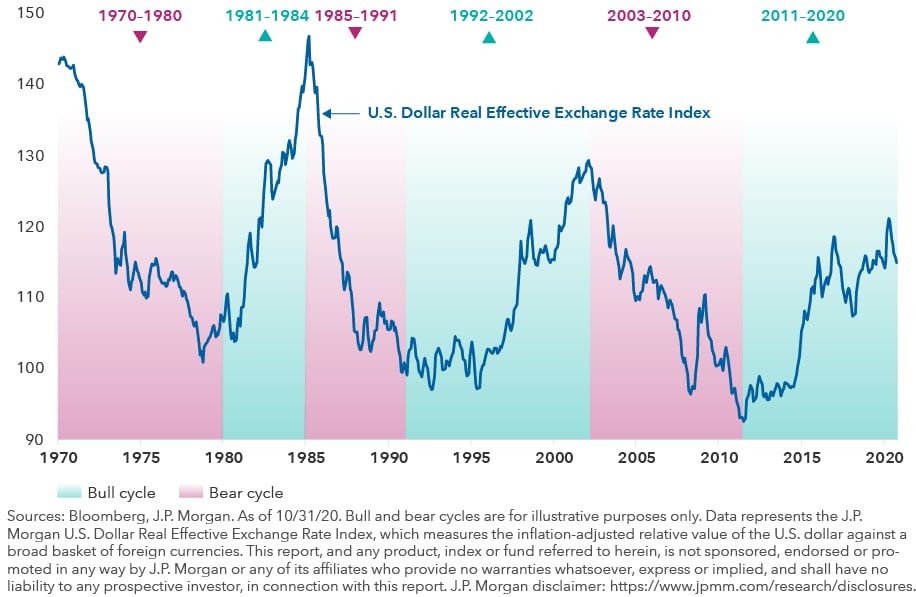 Noriko Chen is an equity portfolio manager with 29 years of investment experience. She has covered the energy & Asian construction sectors and has a BA in economics from Williams College & a Japanese language degree from Keio University.

Jody Jonsson is an equity portfolio manager 31 with years of investment experience, 29 at Capital. She holds an MBA from Stanford and a bachelor's from Princeton. Jody is a CFA charter holder and a member of the CFA Institute.

Jens Sondergaard is a currencies analyst with 13 years of experience, six at Capital Group. Earlier in his career at Capital, he worked as an economist covering the eurozone and the U.K. Prior to joining Capital, he was a senior European economist at Nomura, a senior economist at the Bank of England and an assistant professor at The Johns Hopkins University. He holds a PhD in economics and a master's in foreign service from Georgetown.

A Vaccine: The Best 2020 Holiday Gift