Defensive equities are usually found in sectors that have withstood market shocks, such as utilities and real estate. But as COVID-19 shakes up investment conventions, companies with intangible assets are being more appreciated for their volatility cushion.

The nature of defensive stocks can be surprising. We saw evidence of this during the COVID-19-fueled sell-off in the first quarter, when equities from traditionally defensive industries like utilities and real estate didn’t protect portfolios as in prior downturns. Meanwhile, historically less-defensive sectors, such as software services and digital media and entertainment, were surprisingly less impacted.

While defensive stocks didn’t meet expectations during the recent sell-off, we don’t believe that their protective potential is lost forever. Still, investors should broaden their sources of volatility mitigation. And in an economy increasingly influenced by service- and technology-heavy industries, we think intangible assets should be top of mind.

By capturing the contributing value of things like brand, platforms and data, intangible assets are more concrete than many investors think. Along with other fundamentals, intangibles can augment quantifiable intelligence on a company’s competitive advantages, sustainability and resiliency—all very tangible predictive signals of long-term defensiveness.


Touching on Intangibles: The Different Paths to Defensiveness

Factoring intangible assets into fundamental analysis isn’t new. Brands and patents, for instance, have always mattered to a company’s bottom line (just ask Coca-Cola and Merck). But the distinct ways intangibles are assessed are rapidly evolving—and turning even obscurities like culture and network effect into measurable, predictive data.

Separating and capitalizing intangible assets can better reveal how businesses are run. Whether it’s a company’s research and development, culture, brand or patents (Display), intangibles like these often can provide surprising insight on a company’s defensive positioning. 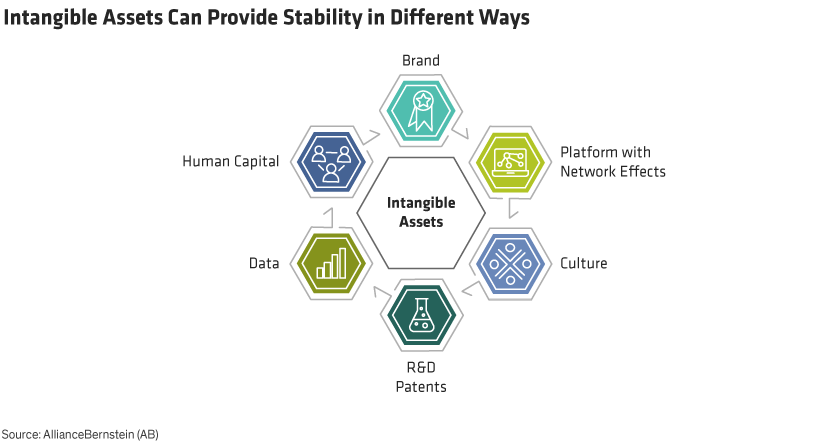 Intangible assets can add value in different ways. So, a closer look can unlock how variations uniquely contribute to a company’s competitiveness, growth and stability.


Platforms with Network Effect–Platforms are matchmakers. And by growing the number of participant connections, a platform business can reduce friction—which helps grow its total accessible market—and effectively lower transaction costs, which can stabilize revenues.

More effective platform models, like PayPal and Salesforce.com, also benefit from network effects when a product or service gains value as it adds users.

Successful high-density platforms cleave to a protective supply-demand model that often assures consistently high return on invested capital and stable sales growth. Leaders tend to stay there, as would-be disruptors struggle to cross an ever-widening network-effect moat. For example, Zillow, the US online real estate database, has most of the country’s house-listing supply and most of the viewer demand—a high barrier that new entrants can’t seem to clear. And great platform businesses tend to yield strong-performing stocks–not just among the few concentrated at the top but across a broad swath of global companies (Display). 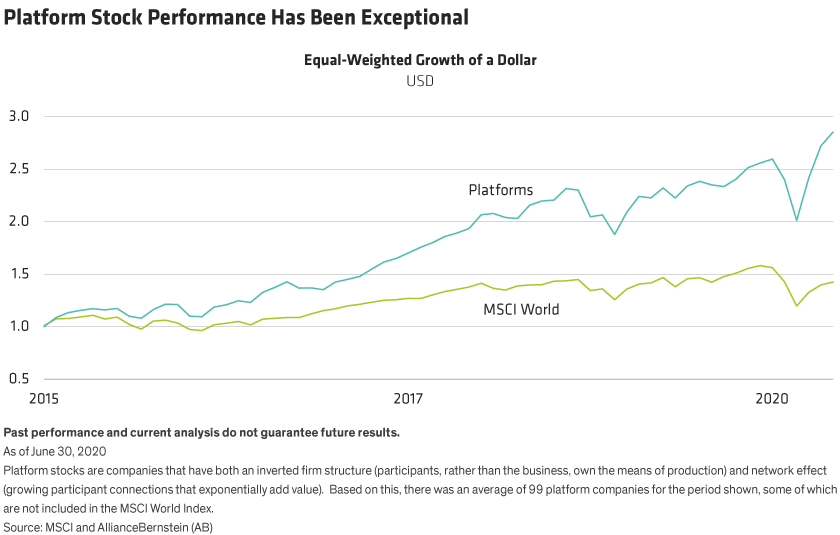 Data–Turning data into money is both art and science, whether packaged for sale or gleaned through online retail, advertising and browsing. Much like crude oil, without refinement, data is just raw material customers can’t use. So, companies that master the collection, cleaning and delivery along the “data monetization” value chain are in strong demand and increasingly attractive defensive plays.

Companies such as S&P Data and RELX Group sell differentiated high-velocity data and analytics that customers want in perpetuity, which creates scale, lowers marginal costs and helps sustain profits. For example, over the last six years, companies with rising data sales have enjoyed stable and consistent growth and were less influenced by economic and other factors (Display). Our research suggests these trends should lead to potentially less erratic share-price swings. 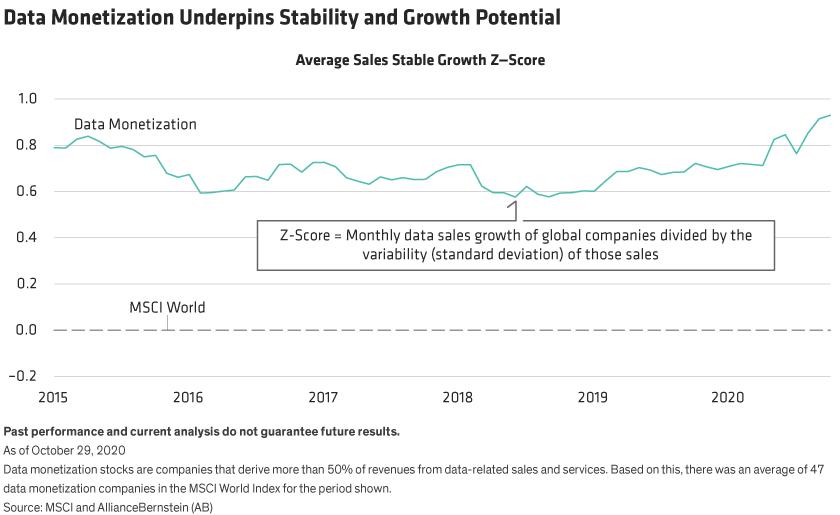 Gauging human capital and culture is also where third-party sources, such as Glassdoor and LinkedIn, are highly effective when objectively interpreted. For instance, we have discovered that the sharpest Glassdoor predictor for stock performance is tied to its “outlook” rating, followed by factors like CEO approval (way up after Microsoft’s Satya Nadella replaced Steve Ballmer), work-life balance and the overall rating. In our view, these natural language measures of how those on the inside think and feel can be harnessed into objective indicators of profitability and return consistency.


Research & Development (R&D)–The generally accepted definition of R&D likens it to expenses to search for or discover “new knowledge.” But we believe investments in R&D can offer much stronger signals, and their added value can be quantified beyond just the pursuit of ideas or concepts. We have found that businesses that spend more on R&D end up more profitable—and for longer periods. And such firms tend to have persistent and predictable fundamentals, such as lower debt, higher growth potential, better profitability and positive market sentiment.


Patents–Beyond legal protections, a patent’s value is often the most underappreciated of all intangible assets. Patents are usually overlooked because they’re generally owned by the firm, and not recorded in financial statements. Yet, hundreds of patents are issued every year to companies ranging from information technology to industrials, according to PatSnap. Half of the stocks in the Russell 1000 Index have at least one patent, and some have dozens—each one reinforcing the barriers to entry from competitors, improving internal efficiencies and defending long-term profitability.


Brand–A company’s brand is valuable beyond just golden arches, red circles and other iconic monikers. But as an asset, brand is often mispriced by the market—especially in the short term—which creates opportunities for defensive investors who take a longer view.

Brand assets can be evaluated by looking at advertising costs, typically over the last five years. That might sound counterintuitive, because brand expenses hit a company’s annual financial statement. However, the benefits of advertising and promotion have lasting power—especially if they’re well-spent dollars. That’s why fundamental research of brand spending can be a leading indicator of top-line growth in consumer loyalty, which fuels revenues and helps stability.

COVID-19 didn’t change the nature of intangible assets—we’ve long appreciated their importance to active fundamental stock analysis. And we’re not suggesting they’re recession proof; very few stocks are. But in an unpredictable market, paying as much attention to intangible assets as to traditional defensive stocks can help investors broadly source stocks capable of reducing volatility in equity portfolios.


The views expressed herein do not constitute research, investment advice or trade recommendations and do not necessarily represent the views of all AB portfolio-management teams and are subject to revision over time.

Amidst an uncertain election, three factors contribute to market strength

In Depth with Will Danoff, Fidelity Contrafund