Credit markets are still relatively supportive of stocks, but at the margins, less so. Russ discusses the implications.

As the recent equity meltdown demonstrated, sometime even stellar earnings are not enough. While U.S. stocks are still having a pretty decent year, it would be an even better one if not for the fact that price-to-earnings (P/E) multiples have contracted (see Chart 1). Whether they rise again (unlikely), stay at current levels or fall will largely be determined by credit markets and broader financial market conditions. 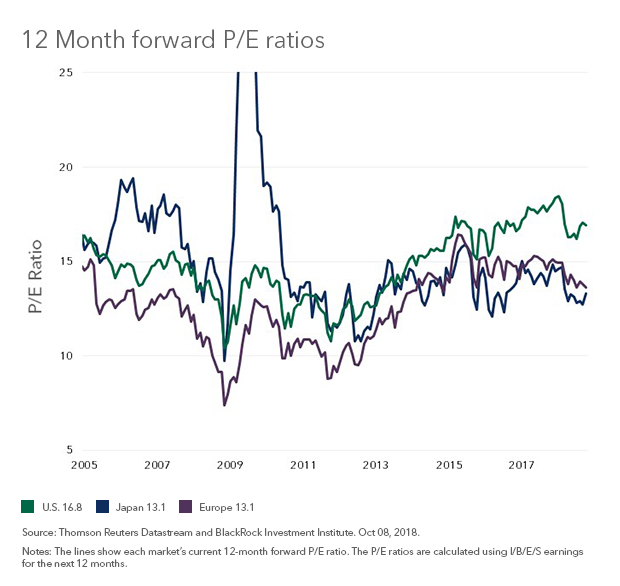 Last May, I suggested that despite rising rates and a stronger dollar, financial conditions remained easy, or at least enough to support stocks. Since then, the U.S. equity market has advanced, albeit a lot less then week ago. Today the situation looks similar, albeit not as supportive. While financial conditions remain accommodative, they’re becoming less so. Consider the following:

A stronger dollar and higher rates are causing a tightening of financial market conditions. One proxy, the Goldman Sachs Financial Conditions Index (GSFC), has tightened by about a quarter point since mid-September and by a full point since late January. Tighter financial conditions help explain the rise in volatility. Historically, a one point change in the GSFC Index has been associated with a 3.5 point rise in the VIX.

However, up until this week, volatility had risen but it remained well below the long-term average. What kept things from getting worse? Credit market conditions remain remarkably, almost surreally benign. High yield spreads are below where they started the year and nearly 200 bps below the long-term average. In other words, the premium investors’ demand for holding riskier bonds is close to an historic low.

Whether or not credit conditions remain benign is critical for stocks. Wider spreads would exacerbate what has so far been a mild tightening of financial conditions.  This is important for several reasons, not the least of which is that in the post-crisis environment tighter financial conditions and higher volatility have correlated with lower equity multiples.

As discussed in previous blogs, multiples have been lower when volatility has been elevated. For example, a VIX at 11, the 2017 average, would imply a trailing P/E ratio of approximately 20. However, if the VIX were to rise to around 20, a level consistent with modestly tighter financial market conditions, fair value for the S&P 500 would drop to approximately 16.5.

Any dislocation in credit markets will accelerate what has been, up until now, a fairly modest tightening of financial market conditions. Under that scenario, volatility is likely to climb further. Should volatility rise back towards its long-term average, even strong earnings growth may not be enough to offset lower multiples.