Update on Growth and Value Stocks

Growth has been on a roll. Based on the Russell 3000 style indexes, growth’s 18% year-to-date gain is 14% ahead of value’s 4% advance. Looking further back, this growth outperformance is nothing new. Over the past 10 years, including the entire financial crisis period of 2008 and 2009, growth has outpaced value by about 50% [Figure 1], representing the longest period of growth outperformance since style indexes began to gain a following about 40 years ago. Using Fama-French data back to the 1930s, before the Russell indexes were created, this is the longest bull market ever for growth stocks.

Due to this observation setting off contrarian alarm bells in our heads, this week we discuss the potential for a value rebound. 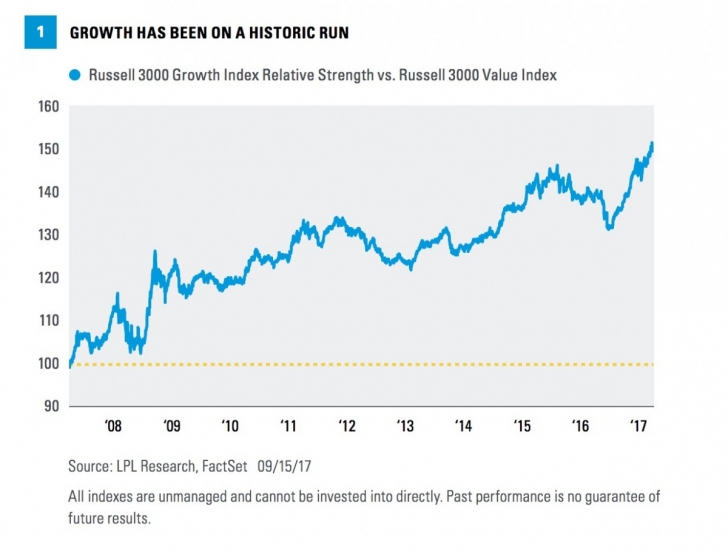 A historically favorable condition for the value style to potentially thrive is an acceleration in economic growth. Although today’s economic growth is still subpar, it has picked up a bit from 2% gross domestic product (GDP) growth to around 2.5%. GDP grew 3% annualized in the second quarter but a slowdown to 2–2.5% is likely in the third, excluding the temporary effects of Hurricanes Harvey and Irma. Additionally, we have seen a pickup in earnings growth, which also tends to correlate with better value performance. The S&P 500 Index has produced two consecutive quarters of double-digit year-over-year earnings gains. Yet, the value style continued to lag.

So has this relationship been broken? We don’t think so, for a couple key reasons:

· Low interest rates and inflation. Interest rates have remained low, and inflation contained, which has prevented the value-oriented reflation trade that would normally lift the financials and natural resources stocks on the value side (which occurred after President Trump was elected) from working. So part of value’s struggles is skepticism toward the Trump administration’s policy agenda.

· Mixed market confidence. We think market participants are skeptical about whether this latest GDP pickup can be sustained. After a lackluster recovery over the past eight years, the skepticism is understandable. Bond traders pricing in only two small 0.25% rate hikes through 2018 clearly shows little confidence in the economy’s strength.

In a slow economic growth environment, faster earnings growth is scarce, so the growth style that almost always produces faster earnings growth tends to trade at a premium. Value stocks tend to require an economic tailwind to outperform, but the market right now doesn’t think they will get it. We expect that to gradually change over time — and tax reform may help next year — providing a reason to watch out for a value rebound.

Keep in mind, accelerating economic and profit growth does not always lead to value outperformance, as was the case in the late 1990s when growth stocks significantly outperformed on technology’s strength.

In the late 1990s, we certainly saw how important sector performance can be in the growth-value decision. Performance of the biggest value sector, financials, relative to the biggest growth sector, technology [Figure 2], is a key determinant of style performance. Technology’s significant outperformance over financials year to date (27% versus 7%) is the biggest reason for growth’s strong performance in 2017. 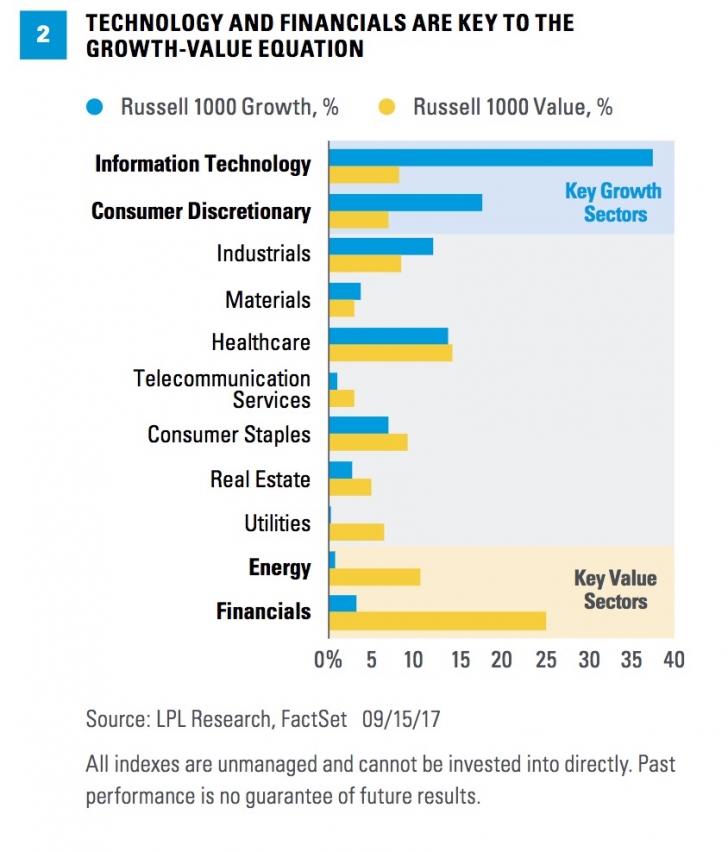 Looking forward, we like both the technology and financials sectors. But after such a strong year for technology, the sector may be due for a pause. That could give value an opportunity to close the gap on growth if financials start to work. The flattening yield curve and still low interest rates have held financials back, but the potential for a more conducive rate environment and the ongoing deregulation efforts present an opportunity.

Losses in energy — down 10% year to date — are another reason value has lagged so much this year. After financials, energy is the biggest value sector. Oil prices are up and energy producer earnings are rising, which may help the sector reverse its fortunes. An energy rebound would also likely correspond to further underperformance from consumer discretionary (a growth sector), as those sectors generally tend not to outperform at the same time, though weakness in utilities (a value sector) could offset some of the impact should interest rates rise.

What this means from a sector perspective is that we see an opportunity for better value performance should it get some help from the macroeconomic environment.

GROWTH NO LONGER A BETTER VALUE

When we discussed growth and value earlier this year, value appeared to be a bit expensive relative to growth. However, after such strong relative performance this year, we would say growth is now on the expensive side. Growth almost always trades at a higher valuation than value, but the current premium, at 34% on a forward price-to-earnings (PE) ratio basis [Figure 3] based on the Russell 1000 style indexes, appears rich. That premium is the highest in a decade and is above the 15-year average of 27% (we look at shorter periods to avoid the distortion from the dotcom bubble in the late 1990s). Although valuations are not good timing tools, in the context of current fundamental drivers, they may present a headwind for growth performance in the months ahead. 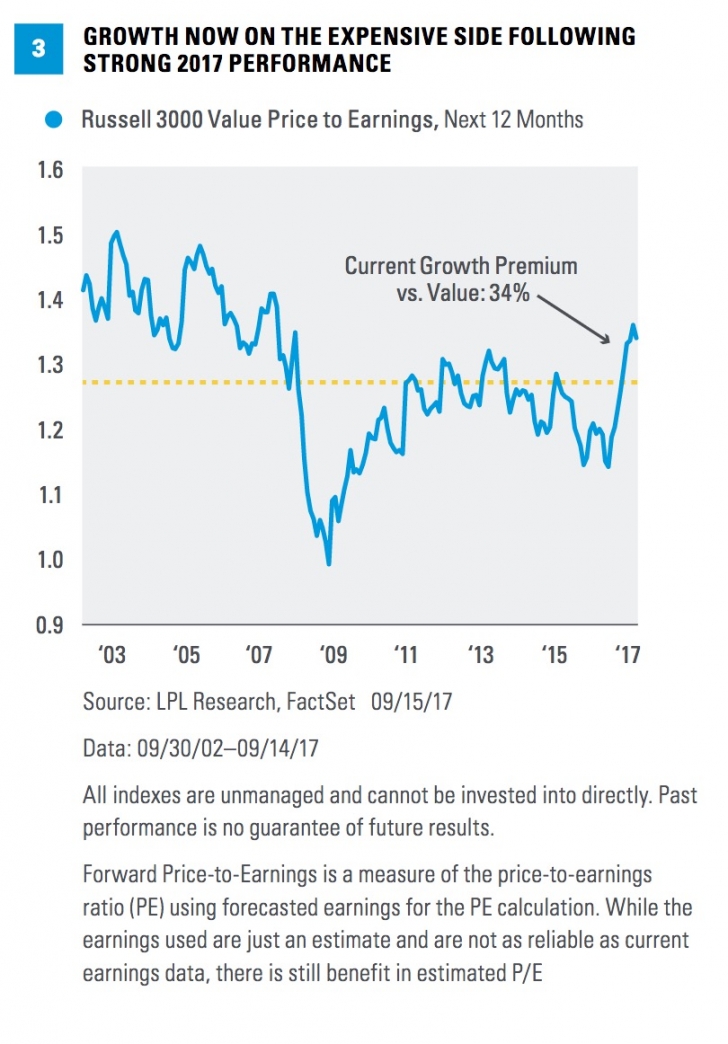 Taking technical analysis into account, the strength of recent growth outperformance suggests that there may be an opportunity for value to play some catch-up. The relative strength of growth versus value using monthly returns stood 7% above its 10-month moving average as of August 31, 2017 [Figure 4]. Historical analysis suggests that this may be stretched too far, potentially setting up an opportunity on the value side over the next several months. 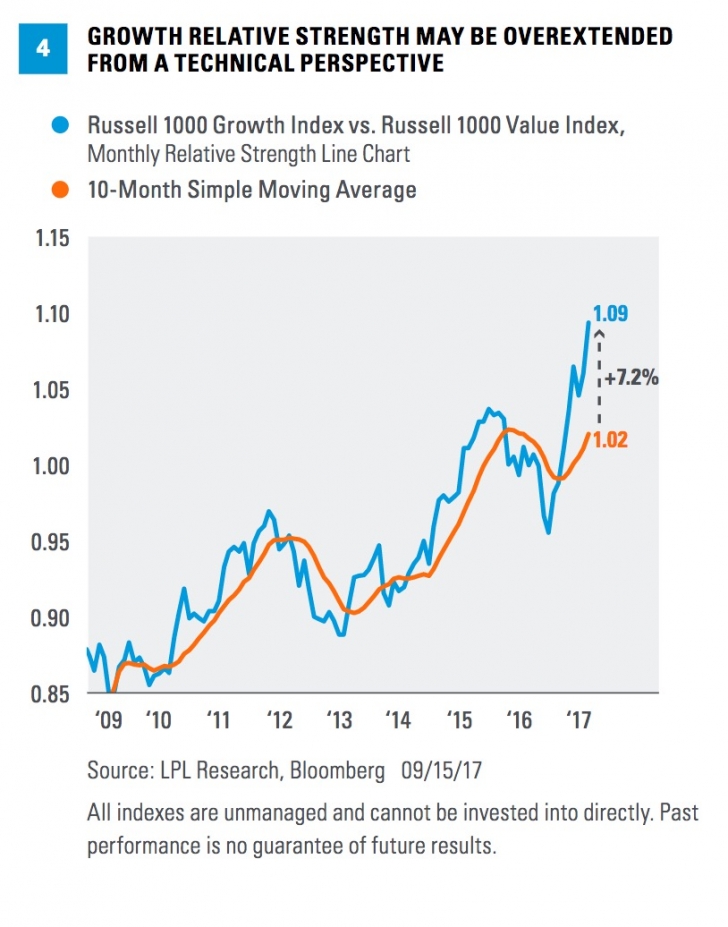 Growth has been faring well over the last 10 years but value may be poised to make a comeback in the months ahead. Economic growth is improving, which tends to favor value. Growth stock valuations appear rich, and technical analysis suggests that the growth rally may be overextended. So for those still overweight growth, even though growth is currently enjoying strong momentum, we suggest being on the lookout for opportunities to play a value rebound.

*The French-Fama value factor sorts all U.S. incorporated NYSE, AMEX, and NASDAQ listed stocks in the comprehensive Center for Research in Security Prices (CRSP) database, divides them into two groups by size, and sorts each size grouping by book value to price. Book value is an accounting estimate of the amount that would be left to shareholders if all assets were liquidated and all debts repaid. Stocks with a high book value to price are considered cheaply valued and are often referred to as value stocks; those with low book value to price are considered expensively valued and are often referred to as growth stock. The performance of the value factor is the difference between the average return of the 30% highest book to value stocks and the 30% lowest book to value stocks. The return of the growth factor is simply the inverse of the value factor. The overall performance of value versus growth over time can be represented by turning the return to the factor into an index. For more information and updated historical data see http://mba.tuck.dartmouth.edu/pages/faculty/ken.french/data_library.html, or for a complete description of the methodology, see Eugene F. Fama and Kenneth R. French, “Common Risk Factors in the Return on Stocks and Bonds,” Journal of Financial Economics 33 (1993) 3-56.

Because of their narrow focus, specialty sector investing, such as healthcare, financials, or energy, will be subject to greater volatility than investing more broadly across many sectors and companies.

Technical Analysis is a methodology for evaluating securities based on statistics generated by market activity, such as past prices, volume and momentum, and is not intended to be used as the sole mechanism for trading decisions. Technical analysts do not attempt to measure a security’s intrinsic value, but instead use charts and other tools to identify patterns and trends. Technical analysis carries inherent risk, chief amongst which is that past performance is not indicative of future results. Technical Analysis should be used in conjunction with Fundamental Analysis within the decision-making process and shall include but not be limited to the following considerations: investment thesis, suitability, expected time horizon, and operational factors, such as trading costs.

All investing involves risk including loss of principal.

Gross Domestic Product (GDP) is the monetary value of all the finished goods and services produced within a country’s borders in a specific time period, though GDP is usually calculated on an annual basis. It includes all of private and public consumption, government outlays, investments and exports less imports that occur within a defined territory.

What Happens When Inflation Walks In?

Why the tech sector glass is half full