Jeffrey Saut: It’s the end of the world as we know it (and I feel fine)

The Butter Battle Book is a 1984 rhyming story by the late, great Dr. Seuss and a personal favorite of mine from back in “the day.” Written as a thinly-veiled critique of the Cold War, the book proceeds in a rather predictable manner, but, in traditional “Suessian” fashion, the overall message mostly takes a backseat to the colorful, inventive language and artwork it features. As Wikipedia describes the plot:

The Yooks and the Zooks live on opposite sides of a long curving wall. The Yooks wear blue clothes; the Zooks wear orange. The primary dispute between the two cultures is that the Yooks eat their bread with the butter-side up, while the Zooks eat their bread with the butter-side down. The conflict between the two sides leads to an escalating arms race, which results in the threat of mutual assured destruction…Eventually, each side possesses a small but extremely destructive red bomb called the "Bitsy Big-Boy Boomeroo", and neither has any defense against it…No resolution is reached by the book's end, with the generals of both sides on the wall poised to drop their bombs and waiting for the other to strike.

For unfortunate reasons, the book was brought to mind once again last week when the saber-rattling tensions with North Korea escalated to the point that fear of a cold war going hot was all most investors were talking about. We now have two “generals on both sides of the wall poised to drop their bombs,” and the reaction by the market gave us our first spike in volatility in quite a while. For now, it remains just a war of words, but for obvious reasons, our inboxes were flooded with fears from clients and financial advisors about how to proceed. In fact, I received more than few slightly-panicked missives from our advisors that went something like this: “My clients are afraid the market is about to crash and want to sell all their stocks, what should I tell them?”

My general response was that, with all due sincere respect to our wonderful, wonderful clients, individual investors just don’t have a great track record of predicting crashes and major market tops, and we, therefore, believe it to be a mistake for most portfolios to get too defensive at this stage. That said, we also understand the fear involved with something like the threat of nuclear war that has ramifications greatly beyond just the financial markets, so I did also offer the following addendum to most of the responses to these financial advisors:

We have a large, wide-ranging audience, which makes it tough to give strategy advice applicable to every investor and portfolio. While we do firmly believe that we remain in the middle of a secular bull market and that the market is going higher in the months and years ahead, investors who are more concerned with protecting what they have instead of growing their assets may decide to limit their risk more than the average portfolio. That is perfectly ok – risk management is arguably THE most critical aspect of portfolio management after all – but the investor must also understand that there is a definite trade-off between risk and reward. While getting overly defensive here will help prepare against a worst-case scenario, it also makes it more likely a portfolio will underperform should the worst-case not happen and all of this blows over.

Look, we are by no means military strategists, and attempting to rationalize the actions of a hermit nation led by a despot who shares more similarities to a Bond villain than a normal head of state is not a task we want to take on. Yet, based on the opinions of men and women who know way more about this scenario than we do, the odds of a direct missile attack or a full-scale war breaking out in the next few weeks probably fall somewhere closer to 0% than 100%, so it still seems we’re talking about a lower-probability event here. Keep in mind, too, that we entered last week, even before the tension really escalated, expecting a downside attempt by the bears, and this North Korea news may have just provided the perfect impetus to break the market from its slumber. Investors always want to know why stocks move up or down, and pundits are always quick to provide the perfect narrative. Yet, the fact remains that even before all the North Korea news broke, the stock market was already showing signs of sputtering, and we even pointed out Wednesday morning in the Charts of the Week that the action Tuesday had all the typical signs of taking out stops above the previous high before a subsequent move lower. President Trump’s fiery response to North Korea took the blame for the sell-off, but as Bespoke Investment Group smartly notes there, may be more to it than that:

Anywhere you looked Tuesday afternoon and again Wednesday morning, the sell-off and subsequent weakness in global markets was linked to President Trump’s “fire and fury” comments directed towards North Korea. While it sounds plausible, the reality is that US equities peaked on an intraday basis Tuesday more than three hours before President Trump made those comments. We know the market is forward looking, but can it really predict the future comments of world leaders?

All things considered, though, the downside attempt, thus far, has really been pretty pitiful. If this had happened at a time when the market was on a little more shaky footing and fewer stocks were participating in the bull market (see Chart 1 on the following page), it feels like investors would have reacted a lot more negatively than they have done. The fact that the “sell-off” from Thursday did not carry over to Friday is a good sign, in our view, but the major averages also haven’t really recovered their key levels to make us think there won’t be more attempts on the downside.

Right now, we don’t know if we can put this North Korea news in the same category of past market shocks, but looking back at history, major market collapses generally occur because of economic and financial deterioration, not geopolitics. Possibly the closest parallel to what’s going on right now is the Cuban Missile Crisis in 1962 (which also happened to occur in August). The result of that was an 11% dip from mid-August into mid-October, but the S&P 500 then rallied 18% from there to close out the year higher than its August peak. We still believe it improbable that we even get an 11% decline here, but any near-term weakness could just be setting us up for a nice close to the year should the geopolitical noise die away.

The call for this week: Remember, immediately prior to late last week’s weakness, the Dow Jones Industrial Average had closed up 10 straight sessions, and nine of those were at all-time highs. The stock market just does not typically collapse from a period of strength like that. Bespoke Investment Group looked at all previous eight-session or longer streaks of consecutive record closes going back to 1928, and the one, three, and six-month returns going forward were all comfortably better than average (see Chart 2 on the following page). We still advise some near-term caution as we wait for more definitive signs of a bottom to be reached, but, as illustrated recently, there remains quite a bit of support underneath the S&P 500 (see Chart 3 on page 4) to hopefully prevent a major decline. The saber rattling may continue into this week, but we will also get a busier economic calendar to possibly provide alternative talking points. Obviously, the situation could devolve very quickly should tensions escalate further, so, to repeat, there’s nothing wrong with managing risk and protecting the downside. Yet, for most long-term investors, we continue to believe the secular bull market will reward those who remain invested and don’t think getting too defensive is warranted at this time. The U.S. futures seem to agree this morning, with the major average bouncing a bit, but it will take a daily close above 2460 in the S&P 500 to help convince us the market has moved on from North Korea for now. 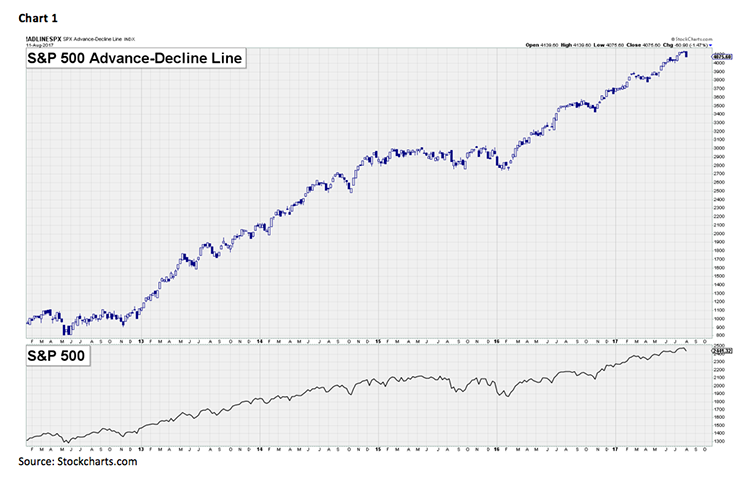 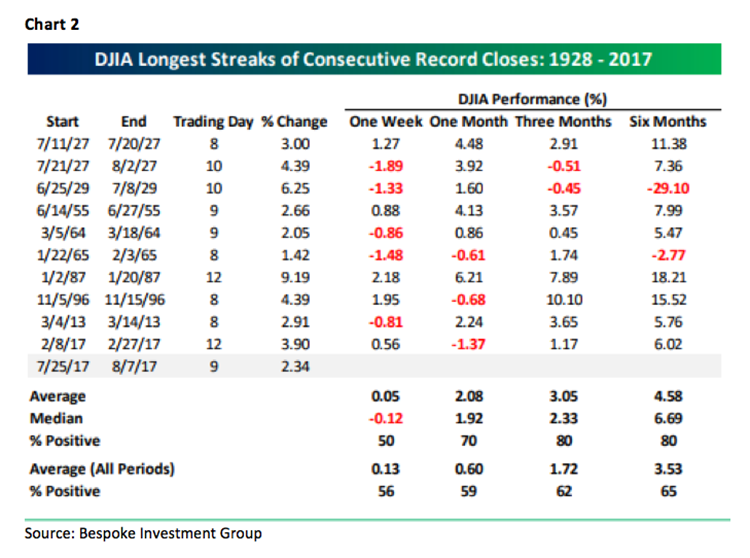 Additional information is available on request. This document may not be reprinted without permission.

RJ&A or its officers, employees, or affiliates may 1) currently own shares, options, rights or warrants and/or 2) execute transactions in the securities mentioned in this report that may or may not be consistent with this report’s conclusions.

The opinions offered by Mr. Saut should be considered a part of your overall decision-making process. For more information about this report – to discuss how this outlook may affect your personal situation and/or to learn how this insight may be incorporated into your investment strategy – please contact your Raymond James Financial Advisor.

All expressions of opinion reflect the judgment of the Equity Research Department of Raymond James & Associates at this time and are subject to change. Information has been obtained from sources considered reliable, but we do not guarantee that the material presented is accurate or that it provides a complete description of the securities, markets or developments mentioned. Other Raymond James departments may have information that is not available to the Equity Research Department about companies mentioned. We may, from time to time, have a position in the securities mentioned and may execute transactions that may not be consistent with this presentation’s conclusions. We may perform investment banking or other services for, or solicit investment banking business from, any company mentioned. Investments mentioned are subject to availability and market conditions. All yields represent past performance and may not be indicative of future results. Raymond James & Associates, Raymond James Financial Services and Raymond James Ltd. are wholly-owned subsidiaries of Raymond James Financial.

Fifty ways to scare your investors… Chapter _?_ (fire and fury)