"Canada Is In Serious Trouble" Again, And This Time It's For Real

Some time ago, Deutsche Bank's chief international economist, Torsten Slok, presented several charts which showed that "Canada is in serious trouble" mostly as a result of its overreliance on its frothy, bubbly housing sector, but also due to the fact that unlike the US, the average household had failed to reduce its debt load in time. 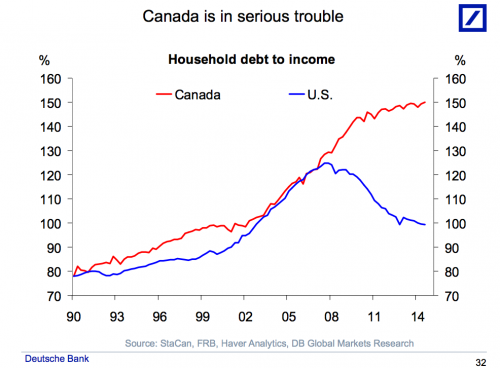 Additionally, he demonstrated that it was not just the mortgage-linked dangers from the housing market (and this was before Vancouver and Toronto got slammed with billions in "hot" Chinese capital inflows) as credit card loans and personal lines of credit had both surged, even as multifamily construction was at already record highs and surging, while the labor market had become particularly reliant on the assumption that the housing sector would keep growing indefinitely, suggesting that if and when the housing market took a turn for the worse, or even slowed down as expected, a major source of employment in recent years would shrink. 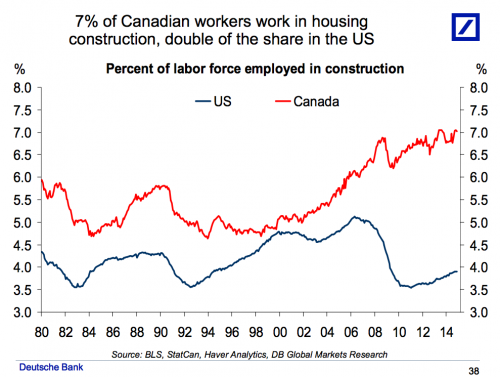 Fast forward to today, when the trends shown by Slok two years ago have only grown more acute, with Canada's household debt continuing to rise, its divergence with the US never been greater... 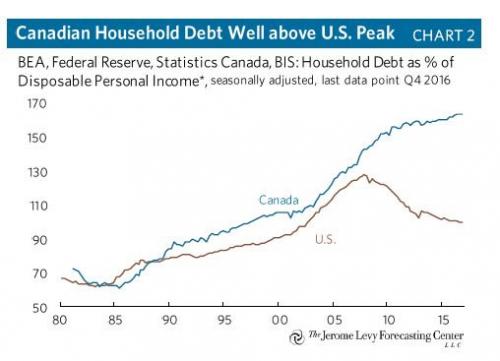 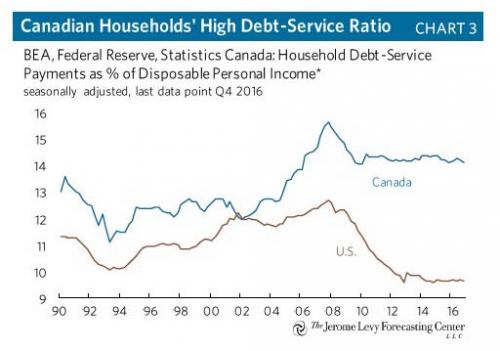 Making matters worse, recent trends in average hourly earnings show that if the US Federal Reserve is concerned with US wages, then the Bank of Canada should be positively terrified. 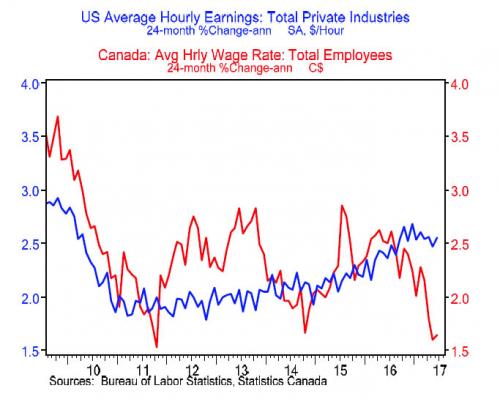 As BMO writes today, the chart above "looks at the 2-year change (expressed at annualized rates), which takes out some of the wonkiness in monthly readings. It’s pretty clear that the trend in U.S. wages has moved up from a sub-2% pace in the early years of the recovery to around 2.5% now. Not a huge move, but still significant. On the other hand, Canadian 2-year wage trends have collapsed to barely above 1.5%, after being above the U.S. pace for most of the recovery. This is a much bigger concern/issue than the modest cooling in U.S. wages in the past few months (which could just be a statistical quirk)."

And yet despite all these concerning trends, virtually all of these red flags have been soundly ignored, mostly for one reason: the "wealth effect" in Canada courtesy of its housing market grew, and grew, and grew... 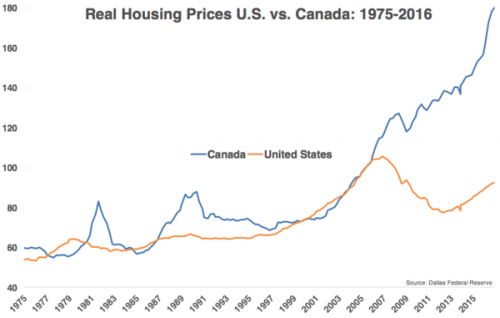 Looking at the chart above, last month Bloomberg said:

No one knows when insanity like this will come to an end. Bubbles are like an avalanche. The longer they build up, the worse they will be when they eventually destabilize.

Well, nobody may know, but as Harley Bassman said yesterday, one can make an educated assumption, and as he said it most likely will be the result of higher rates.

Which brings us to today's decision by the Bank of Canada to hike its rates for only the first time since 2010, sending the Loonie to the highest level since August 2016. 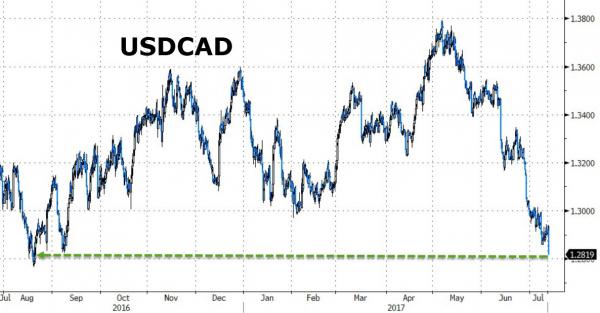 But aside from the surging currency, now that Canada has set off on a rate-hiking path, it has a bigger problem, one whose absence for so many years allowed the "Canadian housing bubble" in Bloomberg's words to flourish: suddenly rising rates. As CBC reports, Canada's five biggest financial institutions immediately increased their prime interest rates on Wednesday, shortly after the BOC hiked by 0.25bps. The Royal Bank of Canada was the first to announce an increase, followed by TD Canada Trust, Bank of Montreal, Scotiabank and CIBC. Effective Thursday, the prime rate at the five banks will rise to 2.95 per cent from 2.7 per cent, matching the 0.25 percentage point increase to the Bank of Canada's overnight rate.

But the bigger problem is not so much rising short-term rates, but what is going on on the long end: it is here that the pain for the housing market will be most acute, because as 5Y rates have doubled in the recent past, the 10Y yield is now at the highest level it has been since May 2015 and rising fast. 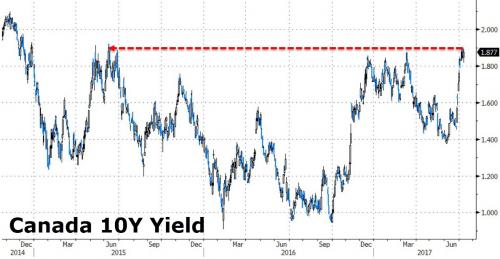 And as US homebuyers from the time period 2004-2006 remember all too vividly, there is nothing that will burst a housing bubble faster than a spike in mortgage rates.

Which is why while Torsten Slok's original warning that "Canada Is In Serious Trouble" two years ago may have been premature, this time it appears all too real thanks to none other than the Canadian central bank, which may just have done the one thing that will finally burst the country's gargantuan housing bubble.

Finally, for those skeptical, here is David Rosenberg explaining why he is 'skeptical' about BoC's view of a robust economy ahead...

David Rosenberg 'skeptical' about BoC's view of a robust economy ahead