Gold output across the globe hit an all-time high in 2015, climbing 1.8 percent to 3,211 tonnes. Much of this growth was led by Mexico, whose output increased double digits (18 percent) from 112 tonnes in 2014 to 133 tonnes last year. Indonesia grew 20 percent, Kazakhstan 29 percent.

This year, global production is expected to level out as project development budgets were slashed during the three-year gold bear market. But with gold prices rebounding, miners are in a good position to be much more profitable.

Below, explore and discover the world’s top 10 gold producing mines. 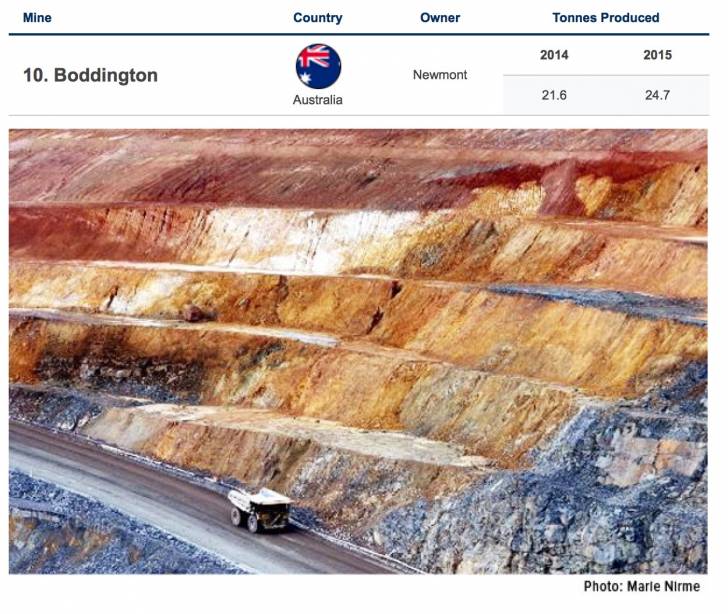 The Boddington gold and copper deposit, located 75 miles southeast of Perth, Australia, is the country’s largest gold mine. The first gold was poured in 2009, and in 2011 Newmont produced its first one million ounces from the site. The mining company has identified gold reserves of 19.5 million ounces at Boddington and plans to spend half a billion dollars to expand production. 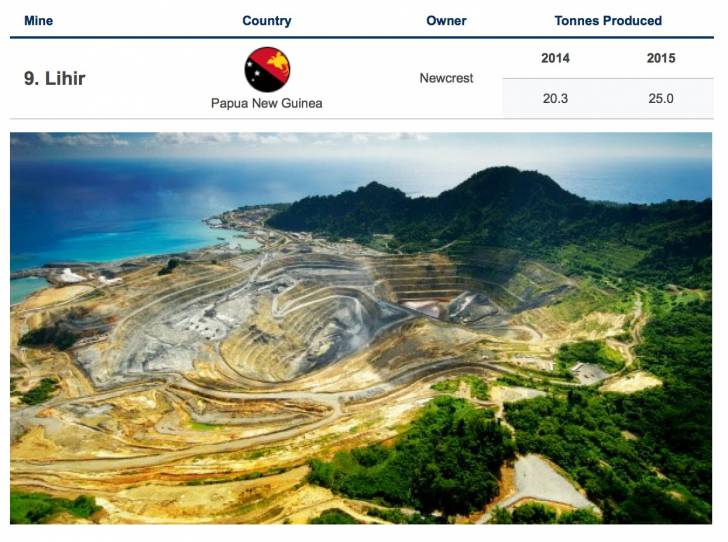 Gold was first discovered on Papua New Guinea’s Aniolam Island in 1982, and in 1997, the first gold was poured at the Lihir project, then managed by Rio Tinto. Australia-based Newcrest acquired the gold deposit in 2010 and has since struggled to keep operation costs under control. The company recently announced that expansion will cost a lot less expensive than initially thought, owing to new processing equipment that can more easily handle sulfur. 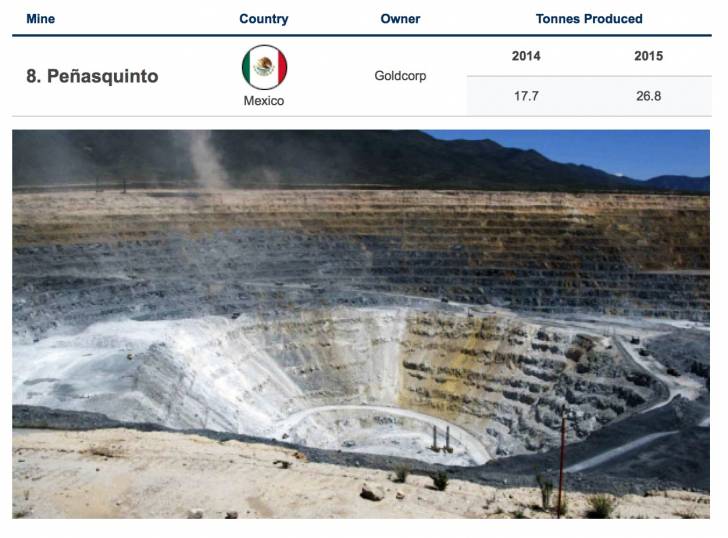 Wholly owned by Canadian miner Goldcorp, the Peñasquinto mine is located in the State of Zacatecas. It’s the largest open pit mine in Mexico and the fifth largest silver mine in the world. Besides gold and silver, the project, in operation since March 2010, also yields zinc and lead. In 2007, Silver Wheaton entered into an agreement with Goldcorp to buy 25 percent of all silver output for the life of the mine. 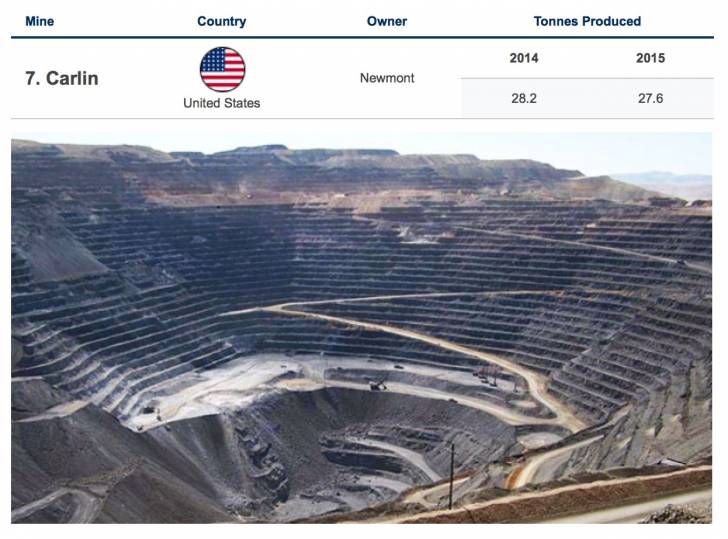 Whether we’re talking about glittering Las Vegas casinos or mining, gold and Nevada are nearly synonymous. The state accounts for 75 percent of total U.S. output, and it’s even estimated to be responsible for producing 3 percent of all gold ever mined in human history. Much of this comes out of the state’s Carlin Trend, the most abundant goldfield in the Western Hemisphere. Along the trend is Newmont’s historic Carlin project, which consists of three open pits and four underground mines. In May 2015, the company celebrated 50 successful years of gold production at the site, which was the first in North America to generate more than one million ounces in a single year. 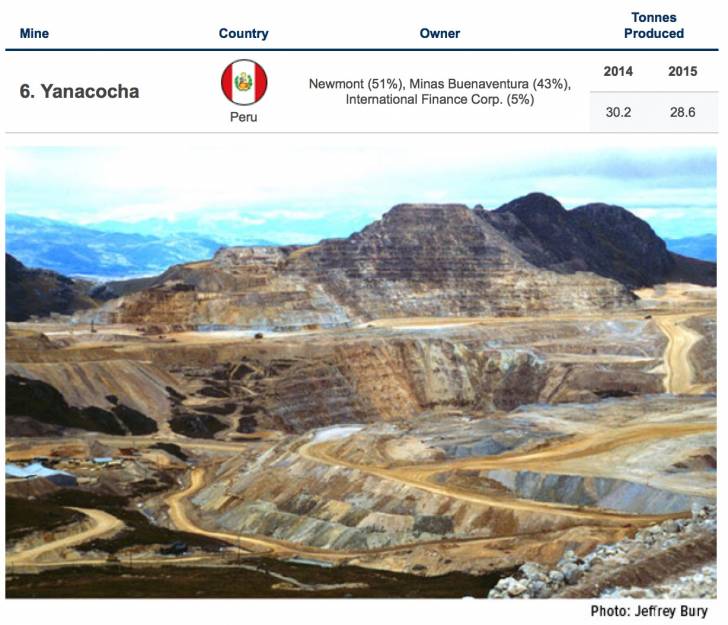 At more than 15,000 feet above sea level in Northern Peru, the Yanacocha project sits atop the Andean continental divide. It’s the largest gold mine in Latin America, covering some 535 square miles. Consisting of five open pit mines, it’s been producing gold since August 1993. Ownership of the mine is split among Newmont; Minas Buenaventura, a Peruvian company; and the International Finance Corporation, controlled by the World Bank. 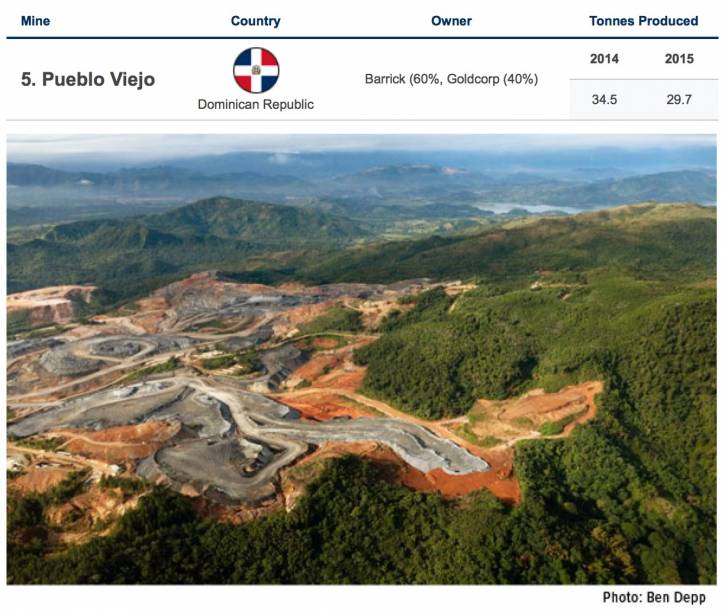 A joint venture between Barrick Gold, the world’s largest gold producer, and Goldcorp, the Pueblo Viejo mine is situated in the rolling green hills of central Dominican Republic, more than 60 miles north of its capital, Santo Domingo. The two Canadian companies took over the project in 2012 after the Dominican government unsuccessfully tried to mine it, with full production capacity reached in 2014. In August 2015, Barrick entered into a streaming contract with Royal Gold, whereby Royal agreed to front $610 million while Barrick is obligated to deliver 7.5 percent of all gold it produces at Pueblo Viejo. 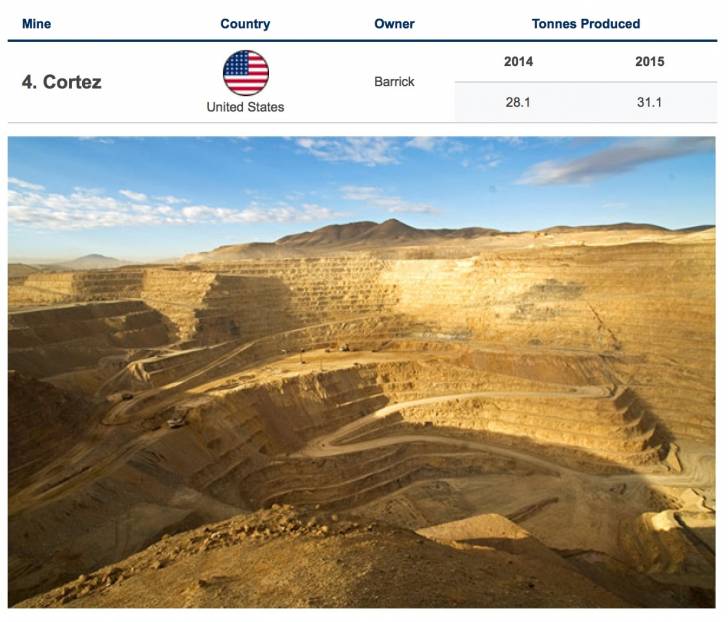 Barrick employs 4,000 people in Nevada, or about a third of the state’s entire mining industry labor force. Many of these people work at the company’s  Cortez operation, located in central Nevada. As one of Barrick’s most promising ore bodies, the site is scheduled to receive $153 million from the company through 2020. This will help expand its underground mining capacity, allowing it to produce an additional 300,000 ounces per year. 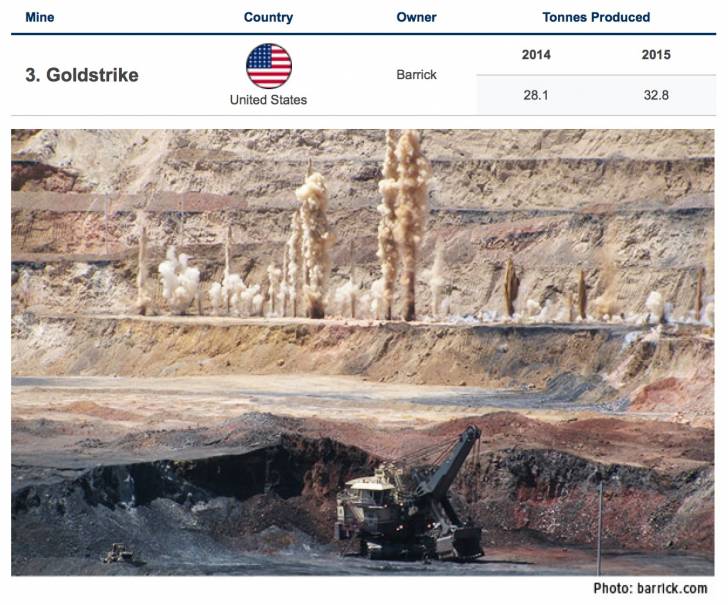 Since 1987, Barrick has operated the Goldstrike mine, also located in north-central Nevada. As the largest gold mine in North America, Goldstrike employs about 1,700 people. Over the last couple of decades, workers have developed a new way to process ore at the site, known as “total carbonaceous matter leach,” which will allow the company to repurpose lower-grade ores. The process is set to move out of its testing phase sometime this year. 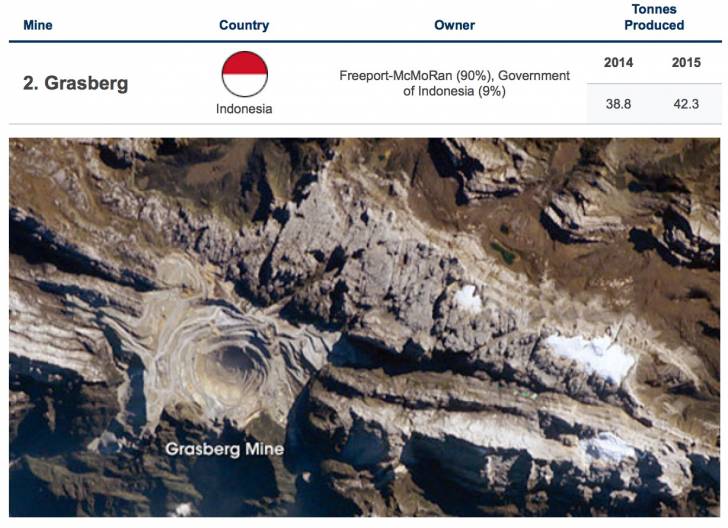 High up in the rain-soaked mountains of Papua province, where earthquakes are not uncommon, sits the world’s largest known gold reserve and second largest copper reserve. Roughly 18,000 people work at the Grasberg mine, for which a village, called Tembagapura, was constructed, containing roads, housing, schools, a hospital and an airport. Nearly a mile wide, the project consists of both an open pit and underground operation. The company is currently in negotiations with the Indonesian government to extend its mining contract, which is scheduled to expire in 2021. 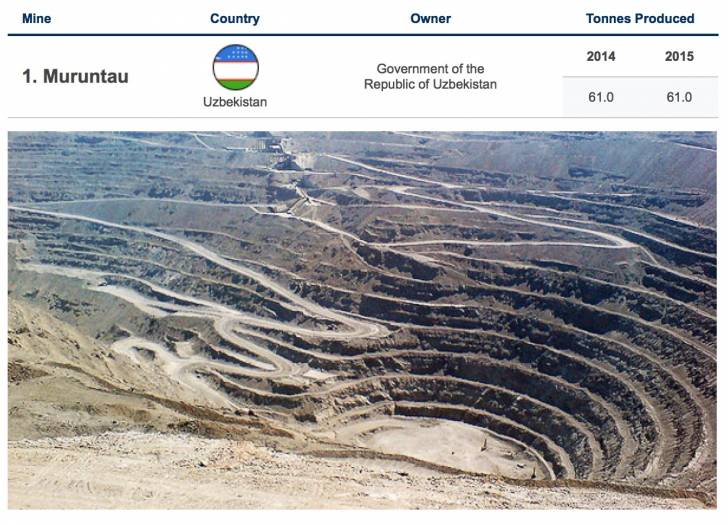 Discovered in Uzbekistan’s arid Kyzyl Kum Desert in 1958, the Muruntau gold deposit began operations in 1967. Today, it’s the largest open pit mine by area and, at 1,900 feet deep, is the world’s fifth deepest. The project, which also contains huge deposits of turquoise and arsenic, sits atop what many geologists believe could be the world’s biggest gold reserve, with various estimates placing the amount at between 2,500 and a mind-boggling 5,300 tonnes.

All opinions expressed and data provided are subject to change without notice. Some of these opinions may not be appropriate to every investor.

Holdings may change daily. Holdings are reported as of the most recent quarter-end. The following securities mentioned in the slideshow were held by one or more accounts managed by U.S. Global Investors as of 3/31/2016: Newcrest Mining Ltd., Goldcorp Inc., Franco-Nevada Corp., Silver Wheaton Corp., Barrick Gold Corp., Royal Gold Inc.

Four things you need to know about quiet markets