For this week’s edition of the Equity Leaders Weekly, we are going to re-examine a topic discussed on March 1st of this year and again take a look at the gold markets and the subsequent performance of Gold Equities via the Van Eck Gold Miners ETF (GDX). Also as an update from our analysis just 3 months ago, we are going to take a look at the comparison chart of Gold Bullion (GC.F) vs. Gold equities to see what changes took place and which has outperformed.

For some, Gold is considered a “safe haven” play in times of increased uncertainty and economic weakness but a word of caution must be made.  This historically very volatile sector is not for the faint of heart; the recent surge in prices to the upside are sometimes met with equally painful pull-backs and reversals.

Let’s examine the continued strength we have seen in Gold Equities by looking at the Van Eck Gold Miners ETF (GDX). The rally that began in February and March of this year brought the GDX up to its long term down-trend line.  This area of significant resistance at the $20 level was tested and eventually broke through in April and the 25+% rally continued into early May. It was here we witnessed the reversal of the major down-trend which started back in 2013.

From looking at the chart of GDX, we can see that since the beginning of this month the shares have pulled back to current support at $22.47, but the new up-trend remains firmly intact.  The next level of support is seen where the original down trend was breached at around $20, and below that at $18.80.  To the upside, resistance is found at its recent highs at $26.33, then at $27.39 and above that if successfully broken opens the door for large potential gains.  Again, with such large potential swings happening in both directions, appreciation of these very volatile equities must be clear to the investor. 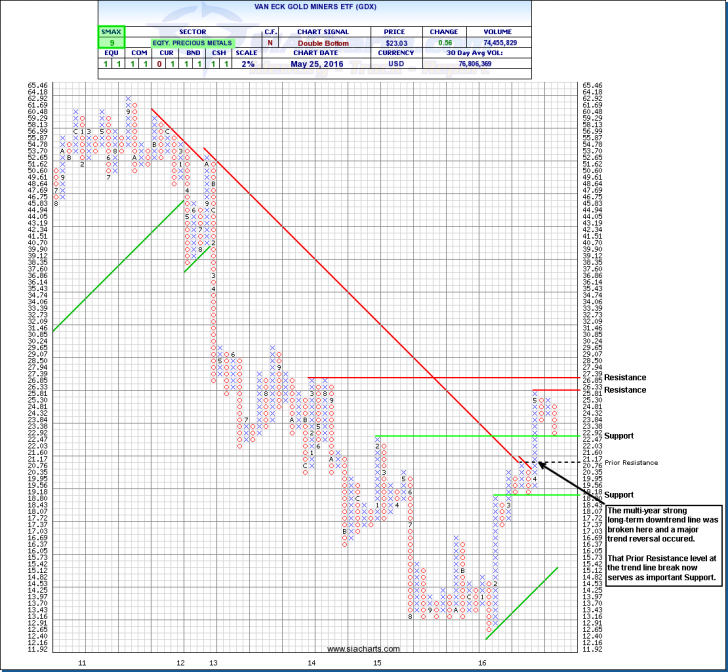 From May of 2011 to the beginning of this year, we can see that the Gold Bullion had won the relative battle over Gold Equities (GDX) and this is evident of the green long-term up trend line.  Starting in February, you can see a change in leadership in which the Gold Equities started to outperform the Bullion and in March, this 5 year period of relative under-performance crossed a critical inflection point.

From the comparison chart it is very obvious that from the start of the year the gold equities have been outperforming the commodity, but the significance as far as their respective percentage moves isn't so easy to see.  If you compare the 23% move that the bullion has seen this year (from January to its May peak) to the almost 80% rise in the GDX, one has to wonder if this divergence is sustainable.  The 25% run in GDX over the past 2 months while the commodity is virtually flat during the same period brings us back to the risk versus reward on assuming this spread will continue to expand.  Again this is a very volatile market sector, and one must be very aware that changes can come quick; enjoy the action.

For a more in-depth analysis on the relative strength of the equity markets, bonds, commodities, currencies, etc. or for more information on SIACharts.com, you can contact our customer support at 1-877-668-1332 or at siateam@siacharts.com. 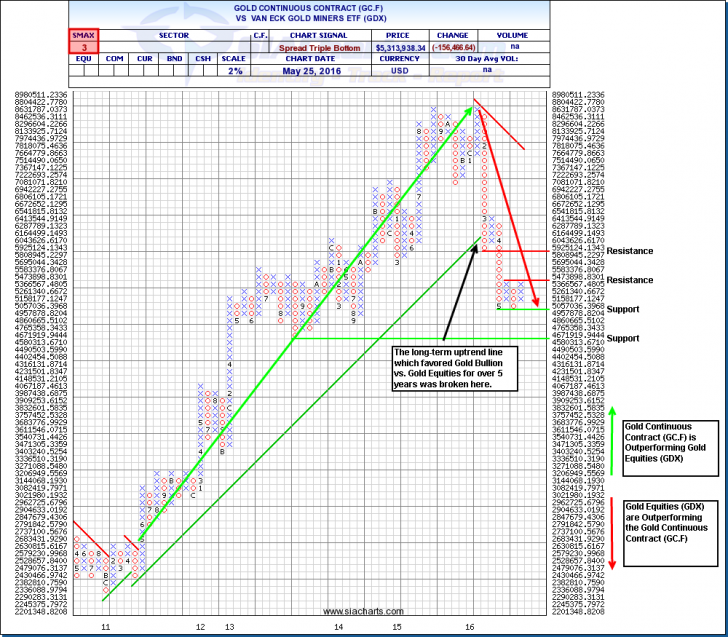 Artificial Intelligence: From Checkmate to Teammate