China’s Millennials: Have Money, Will Travel

China’s millennials are better educated and more affluent than their elders. They also have a serious case of travel fever. Their favored destinations, and shopping habits abroad, could have far-reaching implications for a wide range of global companies.

China’s millennials make up a large and growing slice of the country’s most affluent citizens. It’s estimated that there are around 300 million of these young consumers born between the early 1980s and 2000. They’re the first generation in the history of the People’s Republic to be raised amid relative prosperity and social stability and are the beneficiaries of the country’s roughly fivefold increase in education spending over the past decade. About a quarter have attended a university or another institution of higher education (Display). 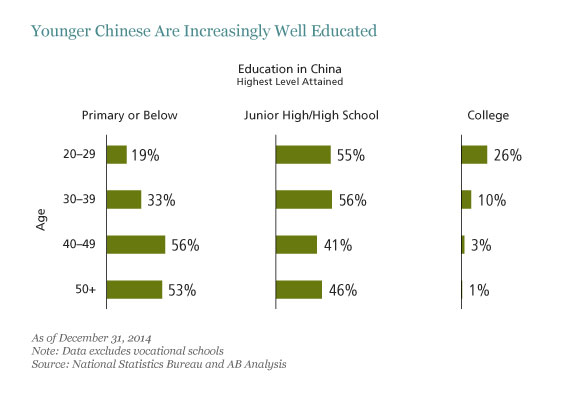 As a result, they’re more likely to be in white-collar professions than older Chinese and to earn higher salaries. Chinese millennials already make more money than their parents and their spending power looks set to increase further as their incomes rise over time.

They’re already having a profound impact on global consumption, creating new demand for a wide range of businesses. One trend stands out: Chinese millennials are big spenders on international travel. They typically make four trips outside their country per year, twice as many as their Asian peers. The travel boom is fueling growth for domestic and regional airlines, airports and online travel agencies.

Hong Kong and Macau are traditionally the most popular destinations for Chinese tourists, but the younger generation seem increasingly prepared to travel further afield. South Korea in particular is seeing an influx of Chinese millennials: it’s estimated that just under half of all 20- to 40-year olds visiting the country last year came from China (Display). 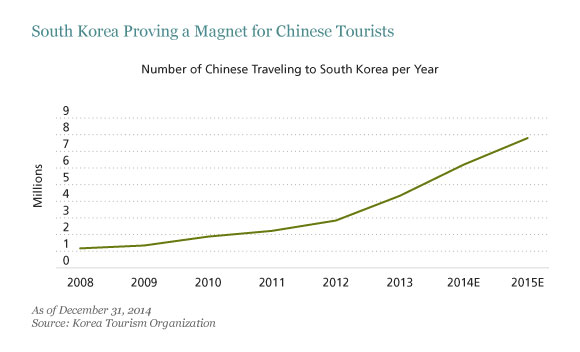 Some of Korea’s appeal seems to stem from the huge popularity of Korean TV dramas and movies (K-drama) and popular music (K-pop) in China and Southeast Asia. This phenomenon is known as the Korean wave or “hallyu”. As the hallyu has swept across China, it’s resulted in staggering audiences for the most popular K-drama and K-pop. For example, “My Love from the Star”, a 21-episode Korean fantasy drama was streamed more than 2.5 billion times on the Chinese iQiyi platform between December 2013 and February 2014. And of course, the “Gangnam Style” video from K-pop musician Psy has attracted sensational viewing figures.

The appetite for all things Korean is resulting in so-called hallyu tourism, with Chinese millennials choosing to visit locations they’ve seen on their favorite K-dramas. Locations used in My Love from the Star, including the picturesque Jangsado Island and Petit France, a French village-themed park, are attracting thousands of visitors a day, more than 50% of them from mainland China.

Hallyu also appears to be driving new shopping trends. While conventional stereotypes suggest that Chinese tourists shopping abroad are fixated on prestige Western luxury brands, there are signs of change among the younger generation. For some millennials, a “Made in Korea” label seems to command the kind of cachet that “Made in France” or “Made in Italy” labels do for their parents’ generation. Sales are booming for items identified with glamorous Korean celebrities, including high-end skincare and cosmetics, fashion labels and technology. Duty-free business at Korean airports is hopping as a result. And Korea’s vast medical tourism industry is growing as millennials increasingly visit for cosmetic surgery “vacations” in pursuit of celebrity good looks.

Korea may be just the beginning. In our view, Chinese millennials are likely to travel further afield—and to spend more while traveling—as their disposable incomes and appetite for adventure grow. This suggests they’re likely to prove an increasingly lucrative market for the global travel and tourism industry when they start to make longer-haul trips.

It’s not yet clear which destinations will generate strongest demand, but Thailand, Japan, Singapore and Dubai are all strong candidates. This could open up significant revenue streams for international carriers serving these destinations, as well as local airports, hotels and resorts, together with casino and theme park chains.

Beyond shopping, investors should take note of how the cultural and social influences that are shaping millennial spending habits are changing fast. Korea’s recent emergence as the destination of choice for medical tourism shows just how closely global and regional businesses will need to monitor and cater for the preferences of China’s younger and more affluent generation to attract their share of the burgeoning millennial wallet.

Guy Haselmann: "Welcome to The Jungle"