Last month, Xian Liang, co-portfolio manager of our China Region Fund (USCOX), attended the 19th CLSA China Forum in Beijing. There he and hundreds of other global attendees were given the opportunity to meet with representatives from Chinese corporations, some of which U.S. Global owns. Xian also managed to get a sense of how the nation’s recent changes in consumer behavior and governmental policy reforms might affect its investment outlook. Although China remains an emerging market, it has lately taken a number of considerable strides to position itself as one of the world’s most attractive places to invest.

Below are three important takeaways Xian returned home with.

China follows the old Soviet five-year plan (FYP) model, meaning once every five years the Chinese government clarifies its national strategy and sets priorities on certain policies. One of the many goals of the current 12th FYP (2011-2015) is to focus on shedding China’s unwelcome distinction of being the largest carbon emitter on the planet. Reportedly, the environment will take center stage during the upcoming 13th FYP (2016-2020), an understandable decision. We’ve all seen the photos of Chinese men and women commuting to and from work in a thick cloud of brown fog, their noses and mouths protected by white surgical masks. Sixteen percent of all land surveyed in China is polluted. According to a 2013 Pew Research poll, when asked why they might consider emigrating, close to half of Chinese respondents cited poor environmental conditions. This answer handily beat out other responses such as higher income, retirement, career development and the notorious one-child policy. (“Children’s education” came in at number one.)

To help turn the trend around, new environmental policies—the first overhaul of such legislation since 1989—were rolled out earlier this year. New laws include stricter emission standards, higher fines for pollution and an outright ban on soil pollution. What’s more, the executives of offending companies may be detained, and negligent government officials may be fined.

There are many who object to government intervention where the environment is concerned, arguing it stifles progress, handcuffs executive decision-making and kills jobs. But make no mistake: green energy is inextricably tied to greenbacks. Renewables and clean utilities companies in China are attracting billions of dollars from global investors—$54.2 billion in 2013 alone. China, in fact, currently leads the world in clean energy investment, beating the U.S. by nearly $20 billion.

Two Chinese companies U.S. Global Investors is proud to own are Beijing Enterprises Water and China Everbright International, both of which are committed to providing clean resources and energy. With a 5 percent market share, Beijing Enterprises is the largest water company in China, a position it’s determined to secure by building more plants and water renovation facilities. The company’s plan is to increase its market share to 10 or 12 percent within five years.

The future of China Everbright, a waste-to-energy company, looks just as bright. Prompted by the latest Environment Protection Law and soil pollution prevention standards, the hazardous waste and sewage treatment market has the potential to thrive like compost-fed grass. Because landfills have reached maximum capacity and conventional trash incinerators produce toxic smog, China Everbright is looking into using plasma gasification, a process that converts organic waste into electricity.

The world in the palm of your hand.

Asia leads the world in mobile device growth, messaging app development and the overall mobile gaming market. The region also boasts some of the best Internet infrastructure. At the head of the class sits Hong Kong, whose citizens enjoy Internet download speeds more than three times faster than what we have in the U.S. 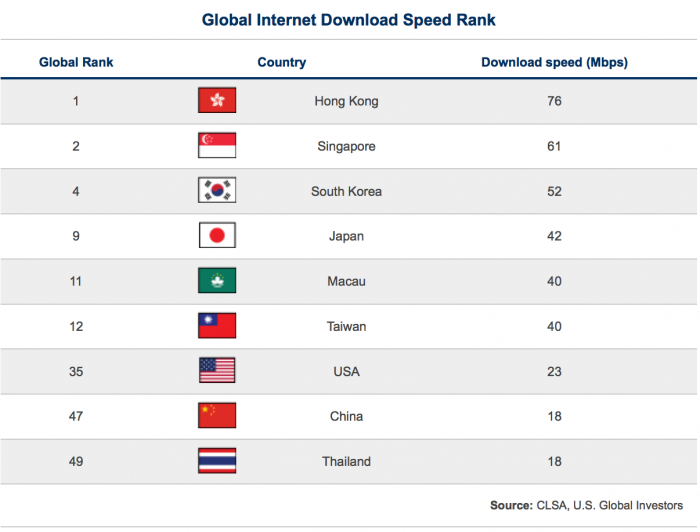 With faster speed comes faster change. Just as it has for the rest of the world, the Internet is transforming how the Chinese conduct their lives. Retail, for one, is progressively moving online, which benefits both the business owner and consumer. Whereas the business owner gets to cut back on overhead costs by running his company solely online, thereby being able to offer merchandise at a lower price than brick-and-mortar stores, the consumer gets to circumvent problems such as traffic gridlock and needless exposure to pollution. Last year alone, a whopping 9.2 billion express packages were delivered in China.

Another industry that’s booming is mobile gaming. By the end of this year, the Chinese mobile gaming market is expected to have generated $3.7 billion, nearly on par with the $3.9 billion Americans are expected to spend. By 2016, however, China is projected to outpace the U.S., $8.2 billion compared to $5.9 billion. This will give China a 26 percent global market share of the mobile gaming industry, with the U.S. at 19 percent.

The chart below illustrates just how dramatically the revenue generated from the Chinese mobile gaming industry is expected to rise by 2016.

One of the Internet companies we own, YY.com, has a compelling story. It was originally conceived in 2005 as an online gaming portal that allowed gamers to connect while they played, similar to Skype. But once co-founders Jun Lei and David Li realized young people were using their service mainly for casual encounters among friends and strangers alike, they decided to rebrand YY as a live-streaming virtual karaoke room. Using a webcam, anyone can create his or her own channel—there are currently over a million of them—and perform in front of an enormous number of viewers. To get a sense of scope, YY has over 92 million active monthly subscribers and receives approximately 20 million unique visitors. Every. Single. Day.

So how does YY generate revenue?  Advertising plays a huge role, as you might imagine. But if a performer is particularly well received, viewers can choose to buy him or her virtual gifts: chocolates, roses, Chanel bags—even cars. In 2011, when the service was introduced, YY made a not-too-shabby RMB 50 million. Two years later, the company hauled in RMB 820 million, 43 percent of its total revenue.

Casinos, or integrated resorts (IRs), are one of the fastest growing sectors in the Asian market, generating $63 billion in 2013. By 2018, however, it’s expected to reach $110 billion, surpassing the U.S. casino market. The reason for this is simple. As the Chinese middle class swells in rank and becomes wealthier, it will have more disposable income to spend on leisure and travel. The country’s nominal GDP growth is projected to hit 11.7 percent by 2016, which means we’ll see more money being spent on tourism. If Japan chooses to legalize gambling, of course—which appears imminent—the region will face steep competition. But for now, destinations such as Hong Kong and Macau are the main attractions.

Although Macau remains and will likely continue to remain the premier casino market in Asia, the Republic of Korea and Cambodia both look very promising and are expected to grow dramatically over the next decade. One of the driving forces behind their ascent is that they have fewer restrictions and regulations than other countries. Korea, for instance, faces no restrictions on the number of tables or slot machines it can have in any one casino; the same goes for Cambodia. And unlike in other Asian countries, the duration of gaming licenses is exceedingly long. Korean casinos have no expiry date but must renew their licenses every three years, whereas Cambodian licenses last for 70 years with no need to renew. 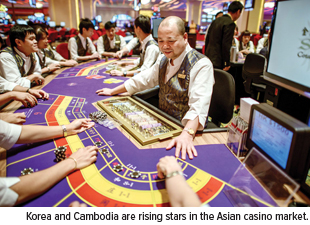 As I said, the Chinese are visiting IRs in these two markets in increasingly greater numbers. Korea received over 4.3 million Chinese visitors in 2013, up from 2.8 million in just the previous year. Cambodia was host to 463,000 gambling enthusiasts, up from 334,000 in 2012.

To accommodate this surge in Chinese tourists, both countries are scrambling to develop new IRs. Korea is set to open two new casinos in 2017 and 2018, one by Paradise Co Ltd, which we own. In Cambodia, NagaCorp Ltd, which we also own, ought to see huge growth, as it will remain the sole casino operator within 125 miles of Phnom Penh, the capital, until 2035. Political instability and poor infrastructure are a concern as always, but because the country enjoys low tax rates and staff costs, it has emerged as a favorable climate for IR development. Goldman Sachs, in fact, projects a 19 percent jump in gross gaming revenue (GGR), making Cambodia the second-fastest growing gaming market in all of Asia.

The new land of the rising sun.

After attending the CLSA China Forum, Xian’s confidence in China as an attractive place to grow your money remains strong. To be sure, the country has a host of problems it must resolve, including widespread pollution, less-than-satisfactory infrastructure inland and a weak housing sector.

But consider this: early next decade, China will likely have over 670 middle class consumers, more than the populations of the U.S. and Canada combined, all of them able to spend their money on discretionary merchandise and services. With so much potential and bandwidth, China well deserves the attention of investors across the globe.

Please consider carefully a fund’s investment objectives, risks, charges and expenses. For this and other important information, obtain a fund prospectus by visiting www.usfunds.com or by calling 1-800-US-FUNDS (1-800-873-8637). Read it carefully before investing. Distributed by U.S. Global Brokerage, Inc.

Foreign and emerging market investing involves special risks such as currency fluctuation and less public disclosure, as well as economic and political risk. By investing in a specific geographic region, a regional fund’s returns and share price may be more volatile than those of a less concentrated portfolio.

Fund portfolios are actively managed, and holdings may change daily. Holdings are reported as of the most recent quarter-end. Holdings in the China Region Fund as a percentage of net assets as of 03/31/2014: Beijing Enterprises Water Group Ltd. 2.03%,China Everbright International 0.00%, YY Inc. 1.90%, Paradise Co. Ltd 2.29%, NagaCorp Ltd. 2.96%.