It was quite a busy weekend for breaking news headlines with Larry Summers dropping out of the race for the head of the Federal Reserve, which theoretically puts Janet Yellen at the top of a very short list, and the U.S./Russia political deal with Syria to dispose of their stockpile of chemical weapons. While the deal with Syria removed some of the uncertainty from the markets in the short term it was the realization that Janet Yellen is now the likely successor to Ben Bernanke that sent stock futures soaring Sunday evening. Wall Street loves the idea of Janet Yellen as Federal Reserve Chair(wo)man as she is, like Bernanke, very biased towards continued monetary interventions as long as necessary to keep the markets and economy afloat.

However, with Syria now quickly fading from the headlines and Wall Street believing that Yellen is a "shoe in" for the Fed, what headwinds still remain for the markets ahead. Here are my quick picks:

1) Syria: While there has been a tentative agreement between Syria, the U.S. and Russia, to destroy Syria’s arsenal of chemical weapons; the reality is that this is the same “dog and pony” show we witnessed with the WMD inspectors in Iraq. Syria will agree to comply up front and then will subsequently move their weapons to other locations such as Iraq and Lebanon. They will only allow the U.N. inspectors to “see what they want them to see” and “compliance” will be nothing more than an act. Of course, this is assuming the Syrian rebels will even let the inspectors into the country as they are highly offended by this agreement as they now feel the U.S. has abandoned them in their 2-year long crusade to oust the current leadership. The reality is that in the next few months we will likely be once again talking about limited strikes in Syria as history is once again repeated.

2) Debt Ceiling: We are once again facing the dreaded “debt ceiling debate” as the Democratic Senate and Republican House square off in their next great budget debate. The "left" will push for increases in spending, higher tax rates on the "wealthy" and potentially and elimination of the "debt ceiling." The "right" is focused on spending cuts and the defunding of the Affordable Care Act. The one positive is that the Republicans have little backbone for a prolonged fight, and are deathly afraid of a government "shutdown," which will likely lead them to once again cutting a very poor deal for themselves. However, what will be critical to the financial markets is whether, or not, the “debt default” card is once again played. While the government will NOT default on its debt, as they can print currency to pay obligations, the rhetoric of a potential default will be a negative for stocks.

3) Eurozone Elections: Angela Merkel is up for re-election in Germany and it is currently estimated that it will be an easy victory for her. However, we have seen such proclamations go awry before and a defeat could cause concerns throughout the Eurozone. While Merkel is likely to win the election there is growing opposition to continued bailouts for the Eurozone members and a rising call for Greece to be expelled. There has been little real progress made in resolving the economic or budgetary issues that confront the Eurozone and, despite short term bounces in activity, the risks of another crisis in the region remains elevated.

4) Interest Rates: The recent surge in interest rates, as shown in the chart below, is not unprecedented during QE programs. 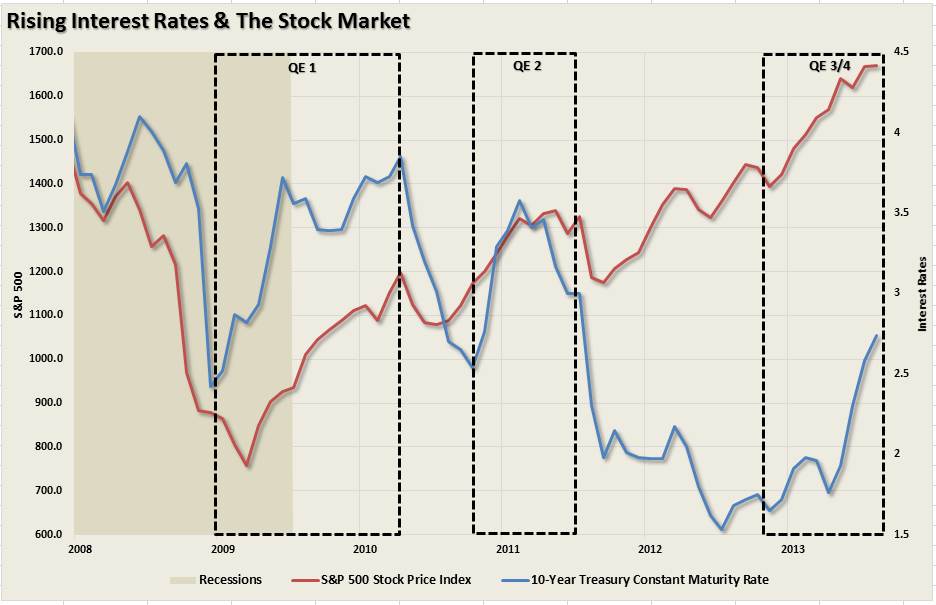 However, it is not just in the U.S. that rates are increasing. European bond spreads are surging as well. 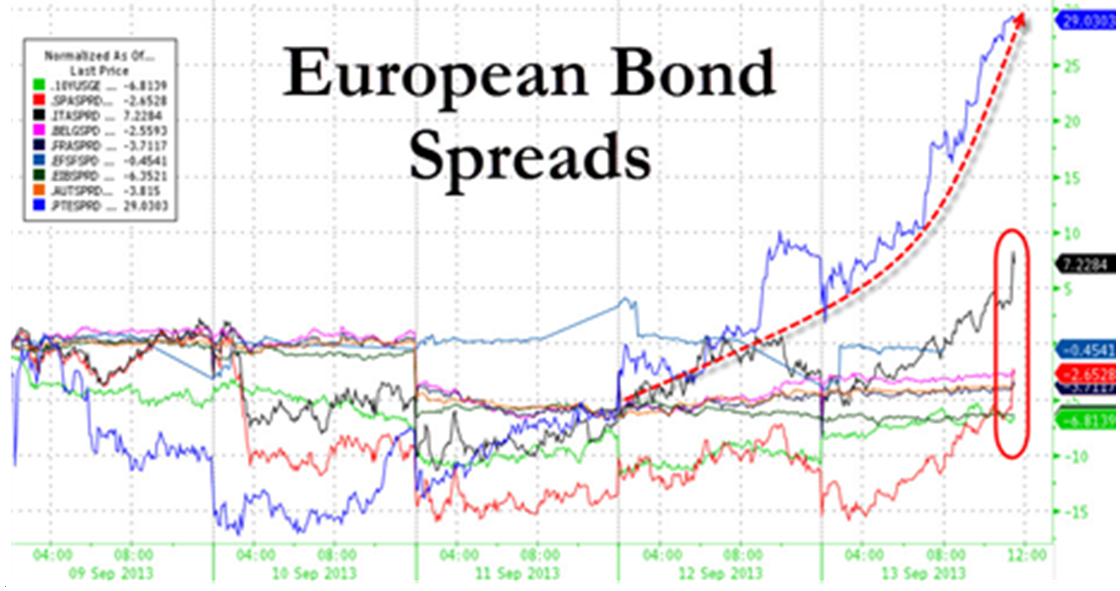 Increases in borrowing costs negatively impact economic growth. This is true for both the U.S. and the very weak Eurozone economies. Importantly, the recent surge in interest rates have yet to completely work their way into the economy. This means that we are likely to see further economic weakness going into the end of the year.

5) Economy: The economy seems to be showing some short terms signs of recovery on some fronts. However, at the moment, these bounces in the data appear to be nothing more than “restocking” activity given the weakness seen in the consumer spending and confidence data. As stated above, higher rates will have a negative impact on consumption, especially when combined with higher food and energy prices, which will be reflected in a slowing of economic growth through the end of the year. The problem is that, as shown in the chart below, the economy is already running at rates that have historically been coincident with recessions. 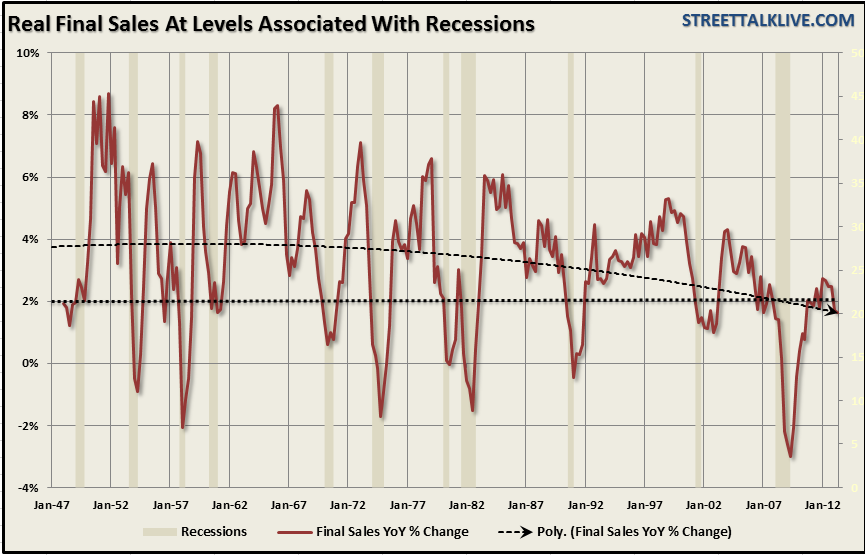 While there are many hopes of an economic revival in the near future the problem has consistently been "sustainability."

6) Earnings / Revenue: As discussed recently corporate earnings appear to be peaking as cost cutting has likely reached the limits of its effectiveness. As shown, revenue growth remains extremely weak while earnings exploded due to "accounting magic." This is reflective of the sluggish economy, and consumer spending, which will make it more difficult to continue justifying current valuation levels.

7) The Fed “Taper:” The market is trying to come to grips with the reality that the Fed is likely to begin tapering their bond purchases soon. The belief is currently that the economy is now able to sustain itself with reduced Federal Reserve assistance. Mohammed El-Erian summed this up well:

“As much as we wish for otherwise (particularly in view of the most positive high-frequency data), there is still not enough evidence to conclude that the U.S. economy will be able to emerge decisively and durably from its low growth equilibrium in the next few quarters. The impact of sluggish domestic components of aggregate demand is compounded by declining growth in emerging economies, insufficient structural reforms and public infrastructure investments, and stubborn residual pockets of excessive leverage – all of which limit the expansion propensity of corporate America, the one component of the private sector with the wallet (but not the will as yet) to spend.

Congressional political polarization is not helping the outlook for a high and durable fundamental U.S. recovery. At a time when the economy needs a tailwind from Capitol Hill, lawmakers risk creating renewed headwinds when they finally turn their attention to steps to keep the government running and lift the debt ceiling.

As for the Fed, we should all hope for “good” reasons for it to taper – meaning that the central bank has strong reasons to believe that the U.S. economy is approaching “escape velocity.” But the Fed could also taper for “bad” reasons – that is to say that its prolonged experimentation with unconventional monetary policy threatens to create too much collateral damage and unintended consequences (including concerns about misallocation of resources, excessive risk-taking and damage to the functioning of certain markets).

In all likelihood, the Fed will taper for a mix of reasons. Specifically, it will likely be comforted by the notion that the American economy continues to heal, but also frustrated by the gradualism of the recovery and the threat of collateral damage. Meanwhile, look for the Fed to try to compensate the potential contractionary impact of tapering by evolving its forward guidance policy.”

8) What We Don't Know/Anticipate: The real issue that will likely disrupt the markets is the one thing that we haven't even considered as of yet. Like Syria, which wasn't even on the radar earlier this year, the next issue will have the same impact. The problem with all of the "risks" above is that they are "known events" that have already been somewhat weighed, measured and accounted for by the markets. The next critical event that rocks the market could range from a failing of "Abe-nomics" in Japan, a spread of global conflict, a financial shock, a natural disaster or simply a market rout that gains traction.

While in the short term the market certainly has momentum on its side, and a lot of financial support from the Federal Reserve, it is important not to forget that the "risk" of investing is not about potentially missing some of the "upside" but catching the "downside" that destroys investment capital. I thought this comment by Bank of America (via Zero Hedge) was roughly in line with my thoughts above.

"Significant monetary stimulus, the end of fiscal austerity, a booming housing market, a cheap dollar, record corporate cash balances... BofAML warns - if the US economy does not significantly accelerate in coming quarters, it never will.

Crucially, they note, asset prices will not do as well in the next 5 years, no matter what the 'nouveau bulls' say. Central banks will be less generous, corporations less selfish. And when excess liquidity is removed it will get "CRASHy" as we discussed previously. In the meantime, five years after Lehman, Wall Street has soared, but Main Street has soured."

While markets rise on the back of hopes of more Federal Reserve support from Janet Yellen should be appointed - the question that Wall Street should be asking is that five years after the Lehman crisis - why do we still need it?