Oil Has Too Many Plumbers (Smead)

We’ve never quite understood why most sensible people don’t apply the same economic logic to investing that they do to any other business. Take plumbing for example. If your town has 10 main plumbing companies and 10 more move into town, your economic mind tells you that the added competition will drive down profits. On the other hand, if five of the plumbing companies go out of business, profits should rise over time.

This is especially true when it comes to industries with numerous publicly- traded companies. Not only are profits squeezed by added competition, but stock ownership is diluted through public offerings of new shares via IPOs and secondary offerings. For instance, the advent of the internet and explosion in technology in the 1990’s caused a huge number of companies to enter the information tech arena. Profit growth for companies like Cisco (CSCO) and Microsoft (MSFT) were stratospheric. To this day, we believe an unusually large number of bright software engineers wake up every day and attempts to obtain part of those profits for themselves.

Therefore, the number of new companies being birthed through venture capital and/or IPOs exploded in the second half of the 1990s. A fever took hold of investors. They called it a “new era” and the feeling of being a pioneer caused them to pour money into these new companies. Added competition eventually caught up to the existing companies and profits ultimately declined. On top of the negative affect this had on stock prices, the dilution from having a plethora of new info/tech choices in the stock market served to torture the investor concentration. Put this all together and you had an 80% decline from March of 2000 to late 2002 in the info/tech-heavy NASDAQ index—too many plumbers indeed. Investors got destroyed by something that they should have learned in their undergraduate economics classes.

As we travel the country speaking with investors, we constantly get asked why we aren’t trying to take part in booming oil production in Canada and the central parts of the US. What is our answer? There are too many plumbers in the oil business. Much like the fever associated with the internet, there seems to be a fever which has been created by the emergence of China as an economic power and the huge multiplier effect it had on other emerging market countries which produced the commodities used by the Chinese. China’s oil usage doubled between 2000 and 2011. How many times will the largest population country in the world double its use of a commodity in eleven years? We suspect the answer is very rarely. It is like asking how many times the internet is going to be introduced.

In response to the China-led boom in emerging market nations, investors and companies around the world have poked holes in the ground seeking to find oil and gas. Countries like Brazil are spending billions of dollars on off-shore drilling and the high prices for oil have made formerly un-economic modes of exploration like tar sands and horizontal drilling viable. The huge move in oil prices over the last 13 years has caused energy stocks to attain their best relative performance to the S&P 500 index they’ve had since the 1970s during the last oil boom. 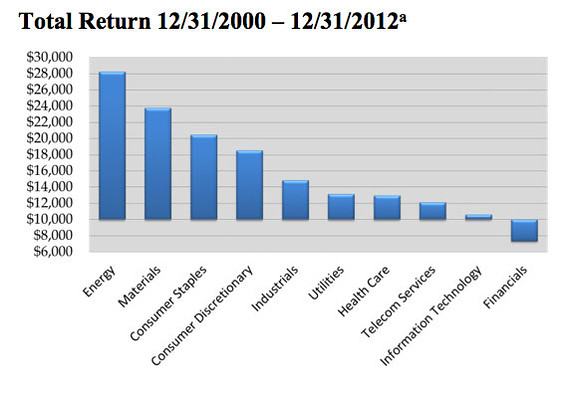 The response to higher oil and gas prices in the US and the developed economic world is simple; the US has used less gasoline every year for the last seven years. The next seven years include dramatically higher fuel efficiency standards mandated by the federal government. I drive a four-passenger sedan which gets 35 mile-per-gallon on the highway. The frugality of drivers only continues among those under the age of 30 and many have fought tight budgets by avoiding automobiles completely. Here is what Elisabeth Rosenthal wrote recently in the New York Times about the changing driving habits Americans:

But America’s love affair with its vehicles seems to be cooling. When adjusted for population growth, the number of miles driven in the United States peaked in 2005 and dropped steadily thereafter, according to an analysis by Doug Short of Advisor Perspectives, an investment research company. As of April 2013, the number of miles driven per person was nearly 9 percent below the peak and equal to where the country was in January 1995. Part of the explanation certainly lies in the recession, because cash-strapped Americans could not afford new cars, and the unemployed weren’t going to work anyway. But by many measures the decrease in driving preceded the downturn and appears to be persisting now that recovery is under way. The next few years will be telling…

…Demographic shifts in the driving population suggest that the trend may accelerate. There has been a large drop in the percentage of 16- to 39-year-olds getting a license, while older people are likely to retain their licenses as they age, Mr. Sivak’s research has found.

Putting this all together brings you to a very economically simple conclusion. There are way too many plumbers in the oil business and there are fewer toilets, sinks and pipes which need repair than there used to be. We believe supply is going up significantly while demand continues to decline. Profits should plummet in the oil and gas exploration business and lower prices will dictate the elimination of uneconomic and expensive drilling modalities, in our opinion. Just like in 1998-99 when investors clamored for tech stocks, investors clamor in September of 2013 to get on the shale boom in North Dakota, the tar sands of Canada or off-shore drilling in Brazil. It looks to us like a good way to destroy wealth by being in a business with fewer customers and too many people competing with you for the business. If the oil business were like the local plumbing industry, we believe the existing owners would be screaming bloody murder as their profits fall. Instead, the oil business plays out in the commodity and stock markets where increased supply and many more companies competing create a “new era” mentality. This is a boom that we believe will end badly for investors.

The information contained in this missive represents SCM’s opinions, and should not be construed as personalized or individualized investment advice. Past performance is no guarantee of future results. It should not be assumed that investing in any securities mentioned above will or will not be profitable. A list of all recommendations made by Smead Capital Management within the past twelve month period is available upon request.

This Missive and others are available at smeadcap.com