Upcoming US Events for Today: 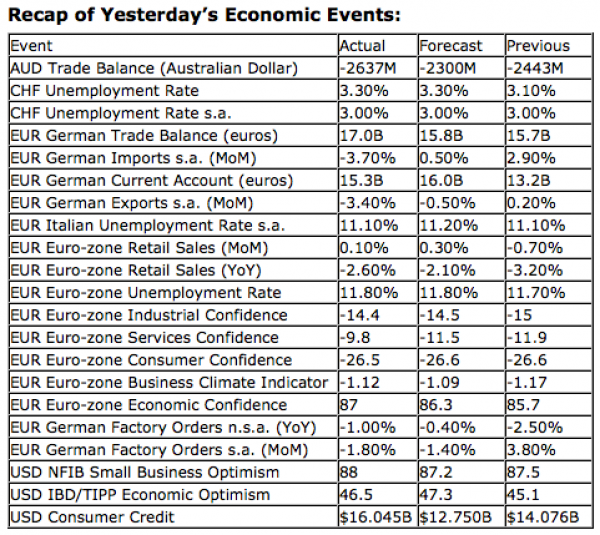 The Markets
Markets drifted lower for a second day as investors positioned themselves for the start of earnings season with Aloca after the closing bell. Shares of the Aluminum producer rose over 1% in afterhours trading as investors reacted positively to the company’s results. EPS was reported inline at 6 cents, however, revenue was reported at $5.9B, which topped estimates of $5.6B. The company also raised their outlook, citing improving China demand. The material sector gained into the report, bucking the losses that were being realized within the broad market. Material stocks continue to outpace market benchmarks over the intermediate-term, emphasizing the risk-on sentiment of market participants. 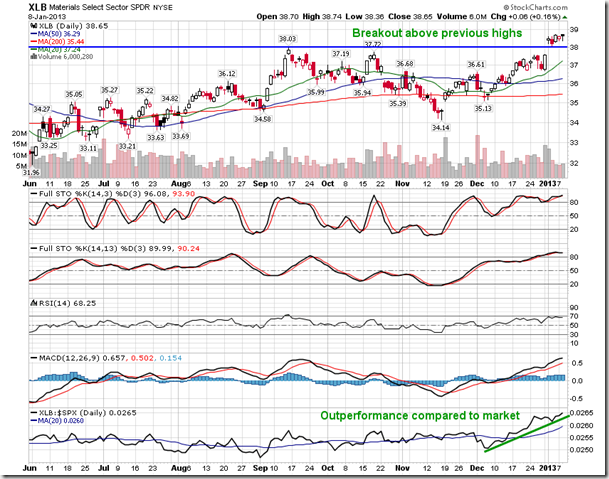 Turning back to the market, the S&P 500 has spent four days now consolidating at a peak following the significant gains to start off the new year. This consolidation may be the flag portion of a bull flag pattern, a bullish setup that implies further gains ahead following a short-term pause in upside momentum. Momentum indicators continue to trend positive and the trend of the 20-day moving average continues to point higher. 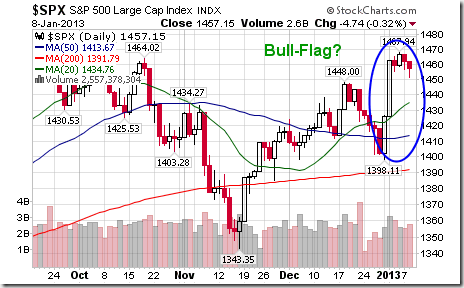 Perhaps more important is the activity of the 50-day moving average, which has been showing signs of curling higher over the past few days after around two months of declines. This is typically a leading indicator to further gains ahead. Until the trend show signs of turning negative, a bullish bias remains warranted. 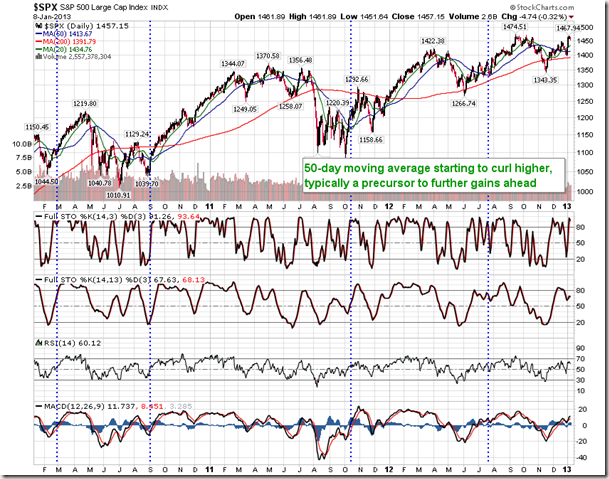 Sentiment on Tuesday, as gauged by the put-call ratio, ended marginally bullish at 0.95. The ratio is pushing back toward neutral levels, which perhaps contradicts the call from a number of analysts that investors are too complacent. The call was derived after the VIX plunged almost 40% last week, back to the lows of the past year, leading many to speculate that investors are not respecting the uncertainties that exist in the market at present. The VIX climbed through the last two months of the year due to extreme uncertainties pertaining to the fiscal cliff, leading many investors to turn to options rather than holding stocks. As fiscal clarity was attained, the premium from the binary event came out of the market, causing a plunge in put option prices as the significant rise in equity values quickly put those options out-of-the-money. The decline in put-option prices doesn’t mean that investors aren’t cautious or unhedged, it merely means that these protective puts are worth less than they were previous. Relative option volumes, as gauged by the put-call ratio, have yet to confirm investor complacency. 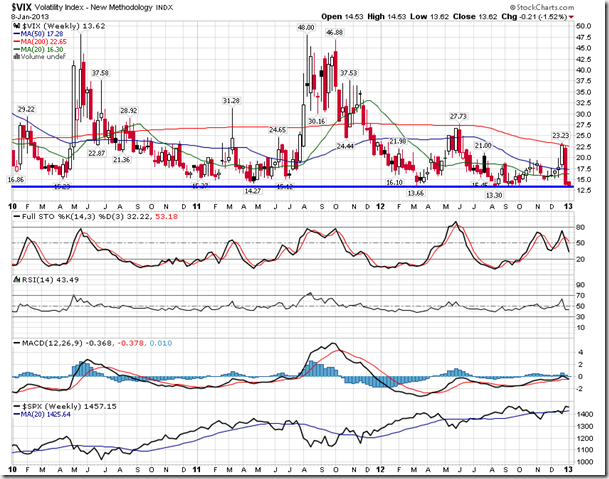 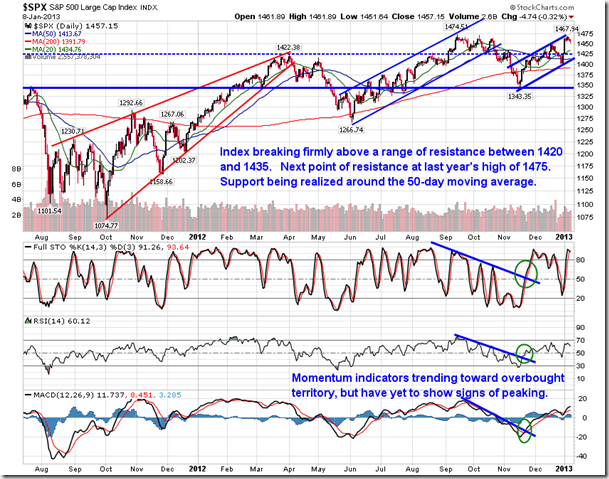 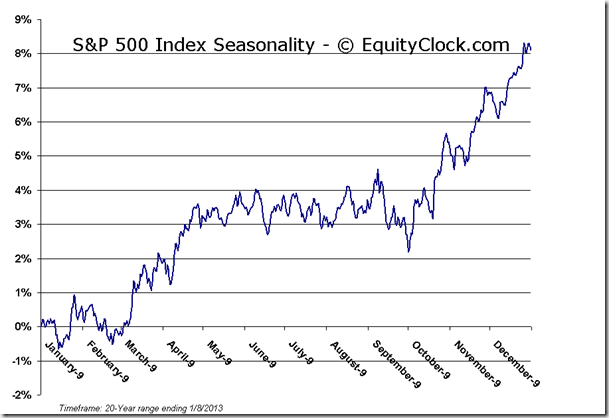 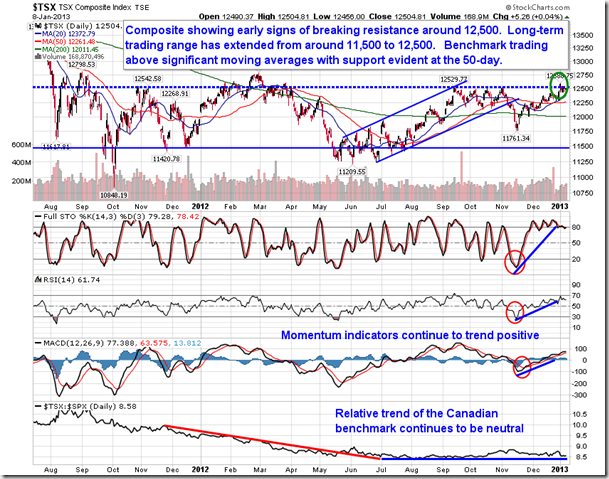 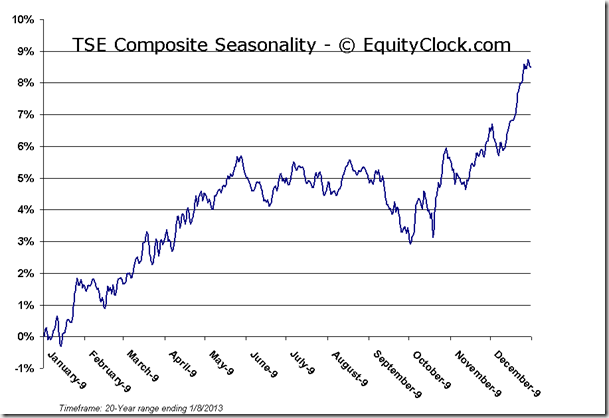 * performance calculated on Closing NAV/Unit as provided by custodian

Author
Don Vialoux, EquityClock.com
Don Vialoux is the author of free daily reports on equity markets, sectors, commodities and Exchange Traded Funds. All of the views expressed herein are his personal views although they may be reflected in positions or transactions in the various client portfolios. Daily reports are available at http://www.timingthemarket.ca.
Previous Article