Investors will likely be relieved that a turbulent 2011 is now behind us with the new year hopefully bringing a more forgiving investment environment. While there have been a number of positive developments, such as the continued strength of U.S equities and the defensive and yield oriented sectors, investors must remember that we are far from being out of the woods. The European sovereign debt concerns that plagued the markets last year – the single most crucial factor to determining how assets perform this year – remain unresolved. In addition, the many global macro-economic risk items, such as continued deleveraging in developed economies and a potential slowdown in emerging markets, leaves equity markets vulnerable for yet another soft-patch in 2012, particularly if policy response continues to dictate market moves. With an increasing amount of push-pull factors in the market, we expect market volatility to return.

Considering this expectation, investors should dedicate a portion of their portfolio (the “Core”) to a strategic asset allocation mix, enforcing discipline in the portfolio construction process. The remaining portion of the portfolio (“Satellite”) can be used to tactically allocate to sectors and themes that are expected to display relative strength at any particular time. The constant and rapid changes in investor sentiment that we experienced in the second half of 2011 will likely continue this year, and as a result, we are dedicating an increasing allocation to our tactical themes to methodically generate potential alpha and systematically control risk. Though the following are the themes we are currently recommending, we are expecting a faster paced market in 2012 and our goal is to inform investors of major tactical changes in our BMO ETFs Monthly Strategy and Trade Opportunity Reports, although some tactical themes may have changed intra-month.

- Volatility shocks will AGAIN be common: In mid-December, the CBOE Implied Volatility Index (VIX) dipped below its 200-day moving average for the first time since last July. Although a positive development, since a lower VIX tends to indicate lessened nervousness, the VIX tends to display seasonality where it has a tendency to drop in December and increase in the month of January. Moreover, its term structure in the futures market currently sits in “contango1,” meaning further dated future contracts are higher priced than closer dated contracts. This suggests the market is pricing in an expectation for higher volatility in the future. As equity prices still remain extremely sensitive to negative
headlines and there remains a large number of headline risk items out there, we believe volatility shocks (“volatility-squared”) to remain a constant theme in 2012. 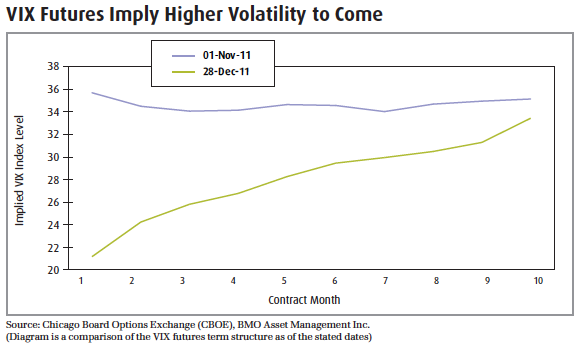 - Slightly overweight bonds: Since last August, we have recommended an overweight to fixed income relative to equities. That’s not to say we are bearish on equities as we have recently seen some positive developments in the equity markets, and we would advise a higher allocation to equities as we did last August. However, we continue to favour bonds over Canadian equities at least over the first quarter. The greenback, which remains in a secular decline, is gathering strength over the short term and we expect this to cause headwinds for the commodity heavy S&P/TSX Composite Index (S&P/TSX). Unlike U.S. equities, which have broken out and are looking increasingly bullish, the S&P/TSX is testing but has yet to break its downtrend pattern. As we anticipate commodity and equity markets to be volatile in the first several months of the new year, investors should not neglect bonds despite lower than historical yields for their volatility mitigation qualities. We do believe equity markets could rally later in the year, if and when the market begins focusing on the micro-economics rather than the macro-economics. We will however be looking to increase our equity weighting, if and when the TSX is able to break its downward pattern over the last several months. Below we highlight areas in fixed income and equity markets that we believe to be attractive.

- Low beta trades continue to fare well: As we anticipate volatility-squared to be elevated in the first half of 2012, stocks that are less sensitive to market movement, or those with a lower beta, will likely outperform. Although lower beta stocks participate less on the upside, they also capture less of the downside, which is critical when equity market volatility is elevated. Cyclical stocks on the other hand, tend to have a higher beta and outperform when the market is trending higher as they capture more upside and downside market movements. As the year progresses, however, and should the market get further clarity on a resolution to the European sovereign debt issues, that may be a more opportune time to rotate to more cyclical stocks. The BMO Low Volatility Canadian Equity ETF (ZLB) is an efficient way for investors to get exposure to a diversified portfolio of lower beta large-cap Canadian equities. 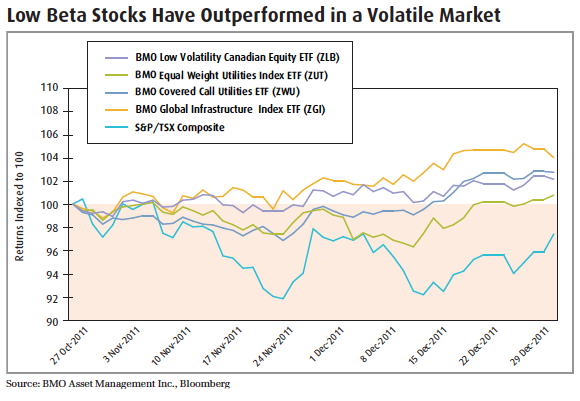 - U.S. equities outperform in first half of year: Similar to our position throughout 2011, we remain favourable on U.S. equities, particularly blue-chip multinational names. The Dow Jones Industrial Average (Dow), which was our top-pick for U.S. equity exposure last year, remains our preferred exposure as it still trades at an attractive valuation with a price-to-earnings (P/E) ratio of 12.7x, well below its 10-year average of 16.6x and equivalent to the MSCI World’s current P/E of 12.7x.

On a global macro-economic level, as we expect European sovereign debt issues to remain in the first several months, investors may look to avoid higher volatility areas such as emerging markets and commodity intensive markets as global growth will be uncertain until later in the year. From a technical perspective, the Dow entered a golden-cross where its 50-day moving average (MA) crossed above its 200-day (MA), leading to further buying, thus creating a tailwind. A break above last April and June’s highs would be seen as further confirmation of a U.S. equity breakout. Investors that are looking to enhance income and potentially mitigate some volatility may want to consider a covered call strategy on the Dow.