Since peaking in 1981, yields on the government bonds of most developed nations have fallen almost continuously, as illustrated in the following graph. 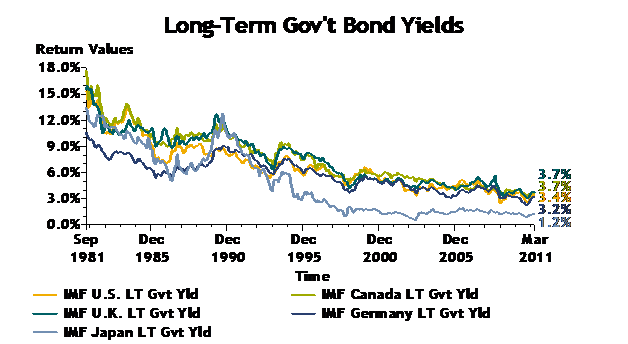 This decline is due, in large measure, to the success of central bankers in reigning in inflation from the heated double-digit numbers of three decades ago. Also, oil prices fell precipitously in the 1980's while deregulation and globalization fuelled competition and exerted downward pressure on prices.

Recent research has highlighted other causes. A McKinsey Global Institute study found that a dramatic fall-off in the level of global investment in physical assets such as infrastructure, plant and equipment since 1980 reduced the demand for capital relative to previous decades and hence, depressed interest rates. Some economists including Fed Chairman Bernanke have suggested that a worldwide shortage of safe assets, particularly in the emerging markets, reduced Treasury yields over the past decade. According to this view, this shortage has been exacerbated by the recent financial crisis.

Although many investors are aware of the challenge lower bond yields present to achieving adequate long-term portfolio returns, a focus on nominal yields (which include both a real and an expected inflation component) conceals the scope of the problem. For investors, it is real (i.e. net of inflation) bond yields that matter. The inflationary component of bond yields only offsets expected price increases. As illustrated in the following graph, real government bond yields on both short-term (in dark) and long-term (in light) Treasury Inflation Protected Securities (TIPS), the principal value of which increases with inflation, have also fallen precipitously. 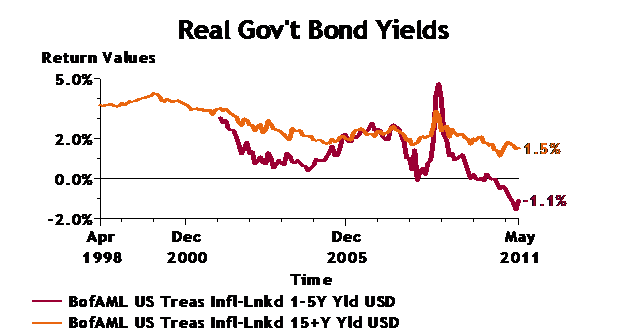 Interest rates today are so depressed by the Fed's monetary policy that investors now receive a negative real yield on short-term TIPS. Like fearful savers in the Middle Ages who paid goldsmiths to safeguard their gold, anxious investors today are prepared to pay in the form of certain real losses for the perceived safety of short-term TIPS. Meanwhile, investors in long-term TIPS who earned real returns in excess of 4% per annum just a decade ago now accept a modest real annual yield in the 1.5% range.

Author
Michael Nairne, Tacita Capital
Michael is responsible for executive management of the firm and is the Chief Investment Officer. Prior to co-founding Tacita Capital, Michael was the Chief Operating Officer of Loring Ward Inc., a family office located in New York and Los Angeles. Michael was also a co-founder and Vice Chairman of Assante Corporation, Loring Ward’s former parent company, prior to its sale in 2003. During his tenure, Assante grew from $1 billion to over $20 billion in assets under administration. Michael has written and spoken extensively on wealth management matters, and has co-authored a best seller on fund management. For several years, he chaired the Investment Committee of LWI Financial Inc. which currently manages over $4 billion in assets.
Previous Article

Michael Mauboussin: "Why Doing Less Can Actually Make You More"