Despite frequent shocks, the healing process in the global financial markets continues to progress. Most recently, investor sentiment seemingly shrugged off the unfortunate 9.0-magnitude Tohuku earthquake/tsunami in early March and the number of aftershocks that followed. Additionally, with rising oil costs caused by the ongoing unrest in the Middle East, investor sentiment, although remaining nervous has proven resilient. As we pointed out at the beginning of the year, we anticipate that the recovery for financial assets will continue but grind higher as improving economic fundamentals act against negative shocks in a tug-of-war of market forces.

A closer look at market characteristics can provide clues on how to tactically allocate capital to better position our portfolios. Many market participants have been quick to point out the dramatic fall in the CBOE/S&P Implied Volatility Index (“VIX”)1, which now sits as low as 15.77, a level not seen since mid-2007. However, looking beyond the absolute level and observing how the VIX itself has traded can provide further clues on the appetite for risk of investors. The frequent “gap-ups” where the VIX opens notably higher than the previous close, demonstrates that investors remain nervous and reactive of negative headlines, but its absolute decline indicates that perhaps many of these same investors don’t want to remain idle while watching the market move higher. Another indicator we also follow, which we have mentioned in prior reports, is the implied correlation between stocks. 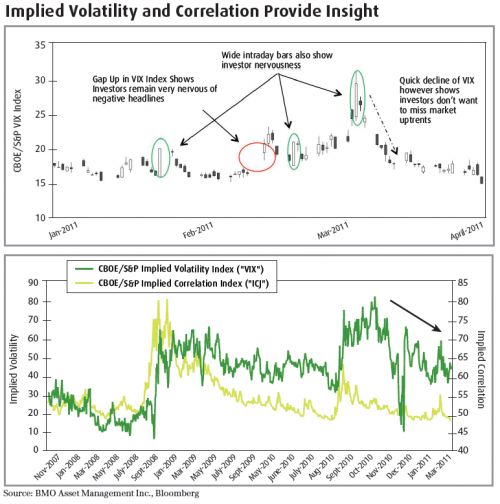 The CBOE/S&P Implied Correlation Index (ICJ Index)2, measures the tendency of individual stocks in the S&P 500 Index to move in-line with each other through options. As many may have noticed, coming out of the liquidity crisis, intramarket correlation remained stubbornly high and has had a tendency to increase with investor fear. The “risk on-risk off” behaviour of investors, along with carry-trades likely serves to exacerbate this effect further. When correlations amongst stocks are high and dispersion of their returns is low, it’s increasingly difficult for investors to outperform the market by picking stocks. Lately, however, we have noticed that correlations have slowly, but surely, come down with the ICJ gradually falling to as low as 57.79 in early April. With this, we believe tactical asset allocation and the combination of active (alpha) and passive (beta) oriented investments will play a bigger role in optimizing a portfolio’s risk/return profile going forward.

After the credit crisis, the notion of diversification being the holy grail of asset protection may have proven to be over-rated as correlation has a cruel tendency to rise to extreme levels during mass liquidation. However, when markets normalize, as they have over the last several months, there will be a larger divergence between both asset classes and sectors within the market. Therefore, at this point of the recovery, investors may want to consider committing a portion of their portfolio to actively allocate to areas they believe will outperform or to otherwise control risk. Rather than simply maintaining exposure to the broad market, investors using a core-satellite strategy of combing alpha and beta investments can better improve the risk/return profile of their investment strategy. With this approach, investors can utilize index products such as exchange traded funds (ETFs) and exchange traded products (ETPs) to tether the core of their portfolio to the market, while the other portion can be allocated to actively select areas of outperformance which can potentially improve an overall strategy’s risk-adjusted returns.

Coal Use in China Shines Light on Growth

Lessons from the Farm (Nairne)