Monetary Spigots and the Reflation Trade

Although the year started with high confidence that the stimulus measures put in place to thwart the 2008-2009 financial crisis was enough to get the global economy back on its feet, much of that hubris has waned as the year draws to a conclusion. In recent months, several economic data points, which we view as being key to this particular economic downturn, have indicated that the recovery is decelerating. Those data points include the U.S. Consumer Confidence Index (CCI), the S&P?Case-Shiller 20-City Composite Index (year-over-year) and the Conference Board’s Leading Economic Indicator (LEI) all of which have turned downward within the last several months.

This has led the market to thirst for another round of monetary stimulus or to be more exact, quantitative easing. The anticipation for what has been dubbed “QE2” has sparked a rally in equities and “risk assets” around the world since early September. At times, this has created a counterintuitive byproduct in economic data since statistics that are normally viewed as suggesting a stumbling  economy have led to market rallies as investors perceive poor data as supportive of QE2. Interestingly, the S&P 500 Composite Index recently entered a “golden-cross,” where its 50-day moving average (MA) trended above its 200-day moving average (MA). Although this is a bullish indicator for stocks, the U.S. Federal Reserve’s (“the Fed”) move to encourage risk taking has created a widening divergence between stock market performance and actual economic output. 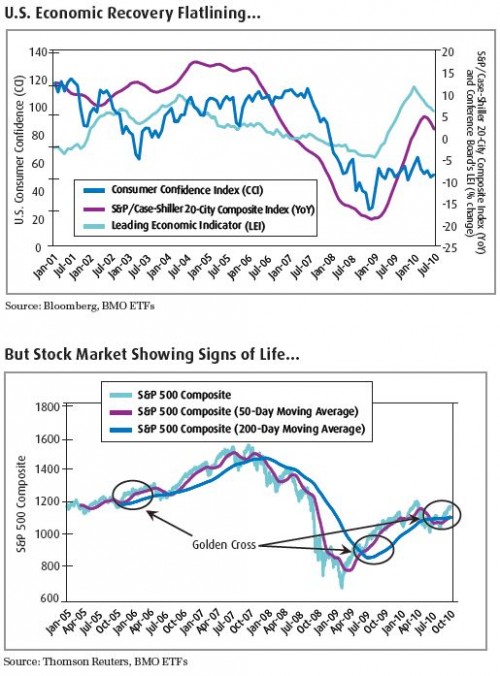 While much of the market rally since Labour Day was in anticipation of the Fed’s announcement of QE2 on November 3, the big question was “how much QE2 was the market pricing in?” With estimates ranging between Bank of America Merrill Lynch’s US$1 trillion and Goldman Sachs Group Inc.’s US$2 trillion, Bernanke was quick to tame expectations well ahead of the Federal Open Market Committee (FOMC) meeting, knowing that too small a number could potentially trigger a sell-off. A week prior to the big announcement, Bernanke made references to QE2 using an analogy of sealing a win in a mini-putt tournament and how the second instalment of quantitative easing should be deployed gradually. Shortly after, the “whisper number” quickly fell to roughly US$500 billion, so when the actual announcement of US$600 billion was made, it was enough to keep the market going.