Dubai – floating on an island of debt

This post is a guest contribution by Dian Chu*, market analyst, trader and author of the Economic Forecasts and Opinions blog.

Stock markets around the world cracked on Friday with the Dow Jones industrial average down more than 150 points (Fig. 1), and commodities plunging as Dubai debt woes unnerved investors, and sent tremors of uncertainty throughout all markets.

The crisis flared after Dubai, a part of the United Arab Emirates (UAE) federation, asked to delay interest payment for six months on $60 billion of debt issued by the state-run conglomerate Dubai World and its main property unit Nakheel.

Concerns that a government-backed investment company risked default ripped through world markets. Investors read it as a sign of yet another sovereign implosion after Iceland and Ireland, and recoiled from risk and piled into dollars. 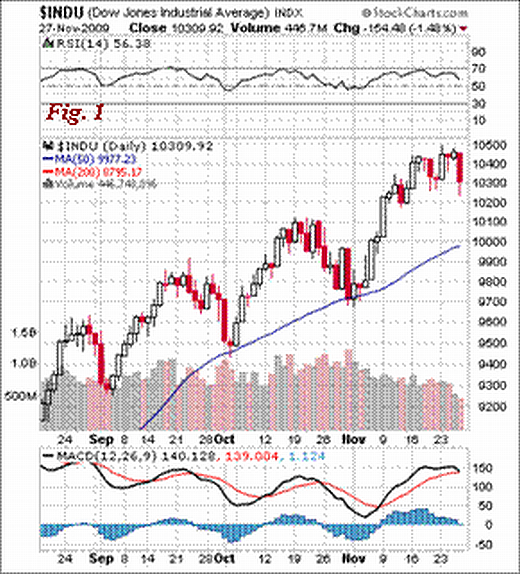 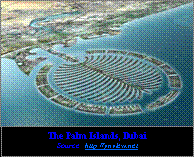 With little oil, Dubai financed much of this rapid real estate development with debt. After incurring its estimated $80-$90 billion of debt in a four-year construction boom to transform its economy into a regional financial and tourism hub, Dubai suffered the world’s steepest property slump in the first global recession since World War II.

Deutsche Bank estimates that Dubai’s property prices, both commercial and residential, have halved since August last year, and could fall a further 15-20% this year.

Most analysts believe U.S. banks are probably less exposed than European rivals to a potential debt default by Dubai World, but a lack of transparency and the interconnection of the modern financial system make it difficult to know which institutions are ultimately exposed.

Dubai World’s largest creditors are reportedly domestic banks in Dubai and Abu Dhabi. MarketWatch noted data from the Bank for International Settlements which put cross-border banking exposure for the UAE as a whole at $123 billion at the end of June. Of that total, European banks hold 72%, with the United States and Japan only holding 9% and 7% of the exposure, respectively. The United Kingdom is by far the biggest creditor with a share of 41%.

Reminder of Other Risks

On a global scale, Dubai World’s debt problem seems relatively minor, but it illustrates the impact from one tiny country in an increasingly interconnected world. The Dubai news also cast doubt over the strength of the U.S. economic recovery, and the prospects for a bottoming of property prices. 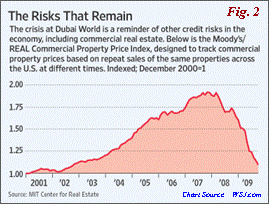 As pointed out in my previous article that the commercial real estate sector posed a much greater threat than the over-hyped “mother of all carry trades.”  The Dubai debt crisis further reinforces this viewpoint.

The potential for contagion from Dubai’s debt woes could further unhinge an already fragile U.S. commercial real estate sector, whose values have already fallen 42.9% from their 2007 peak, close to the lowest since 2002, according to Moody’s. (Fig. 2) The latest Moody’s projection is for prices to bottom at 45-55% below their peak, but could drop as mush as 65% from their peak in a “stress case”.

Write-downs and losses at banks around the world have risen to more than $1.7 trillion since 2007 as the credit crisis undermined the value of assets owned by financial institutions, according to data compiled by Bloomberg. Any further deleveraging and the resulting credit tightening from commercial real estate would impede the financial sector and probably derail the U.S. economy sending it into another recession.

So far, the appearance of recovery in the housing sector is being driven primarily by reduced prices combined with federal programs to lower mortgage rates with the goal of bringing more buyers into the market. 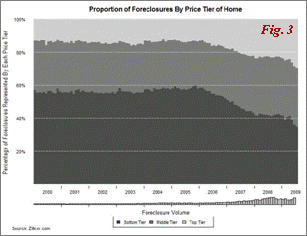 Based on a study released by Zillow.com, the foreclosure crisis has moved beyond subprime mortgages and into the prime mortgage market. (Fig. 3) While subprime borrowers are still a factor in the current foreclosure epidemic, it’s becoming increasingly apparent that the weak labor market is the driving force behind the mortgage crisis we face today.

According to the Mortgage Bankers Association, one in seven U.S. home loans was past due or in foreclosure as of Sept. 30, putting that quarterly delinquency measure at its highest level since the report’s inception, 1972, and up from one in ten at the beginning of the year.

The continued surge in delinquencies suggests that a recovery in the housing market could be hindered by the weak job market as well as by further fallout from the easy money and loose lending practices of the past. The foreclosures and delinquencies are expected to keep rising well into 2010, not leveling off until the unemployment rate starts to moderate.

In a study by First American CoreLogic found that one in four of all U.S. mortgage-borrowers owe more than the value of their properties in the 3rd quarter. And many experts didn’t expect U.S. home prices to hit bottom until early 2011, perhaps falling another 5-10%, as more foreclosures get pushed onto the market.

Negative equity is another outstanding risk hanging over the mortgage market.

Dubai Is No Lehman

The circumstances behind Dubai’s moves are murky, making it hard to gauge the exact risk to the pertaining bonds and Dubai’s own general creditworthiness. UBS cautioned that Dubai’s overall debt “might be higher than the generally assumed $80 billion to $90 billion, due to potential off-balance sheet liabilities. These could include unlimited and unquantifiable amount of credit default swaps (CDS) and other derivatives against the underlying assets, and once unraveled, could potentially erupt into a subprime-like crisis.

The current expectation; however, is that there’s a good chance that Dubai’s problems will probably prove a local issue. Most likely, Dubai, or its neighboring emirate, Abu Dhabi, won’t risk tarnishing their images and reputation further, and will come up with a reasonable resolution.

Even if Dubai goes into sovereign default, the amount is probably not enough on its own to threaten the financial system since any actual losses would be a fraction of the total. So, the problems in Dubai are unlikely to be as serious as last year’s Lehman Brothers collapse, nor is it a reflection on the ability of emerging markets to lead a global economic recovery.

But Dubai could well spur a broader crisis of investor confidence in overly leveraged economies as market confidence world-wide is still fragile from the severity of the financial crisis.  The debts of many emerging markets have risen even further as the countries governments have fought the ravages of the global recession by issuing more stimulus debt to fill the gap voided by private investment.

The spread of credit-default swaps on developing-nation’s bonds jumped 14 basis points after the Dubai news broke, the most in a month, to 3.24 percentage points, according to JPMorgan Chase & Co.’s EMBI+ Index. There is also a clear sign of potential contagion effects of global risk aversion on basically all risky assets, with the dollar and yen being the prime beneficiaries.

Rational expectations or not, for now, the Dubai crisis is simply a reminder that the severe global recession has relegated much debt to near junk status, and there still remains a high degree of uncertainty as to the percentage recoverable on all outstanding debt which is going to be coming due over the next 5 years.

Despite some seminal signs of green shoots in the news headlines during this 9 month liquidity driven rally in many asset classes around the globe, we should be reminded that all that glitters is not gold, and that the global economic recovery is still on shaky ground.